Salmon are showing up in the Arctic in record numbers

The fish that usually define the West Coast are moving north, raising big questions about how a warming climate is affecting northern ecosystems

Salmon used to be infrequent visitors to the Mackenzie River and communities of the Arctic, but more species have begun to show up in the North more often and in greater numbers than ever before.

“They’re indicating change,” says Karen Dunmall, a research scientist with the Department of Fisheries and Oceans who is overseeing the Arctic Salmon project.

The climate change they’re indicating is affecting the Arctic more potently and quickly than anywhere else. It’s manifesting in thinner ice that forms later and breaks up earlier, warmer rivers, milder winters, longer summers and changes in wildlife and vegetation across the Arctic.

Dunmall’s community-based research has found that although some salmon have been found for generations in communities across the Arctic and up the Mackenzie River, they have always been limited in numbers and species.

“Before 2004, for instance, there was the odd pink salmon that was noticed,” Dunmall told The Narwhal.

But now, every other year, salmon are being noticed by fishermen in more and more communities. They have been participating in the research, sending whole fish and heads to Dunmall for recording and analysis.

“It started out just in the Mackenzie River Delta, and now all of the communities in the Inuvialuit Settlement Region (along the Arctic coast) have caught pink salmon.”

And it’s not just pink and chum salmon anymore: other southern species including coho, sockeye and Atlantic salmon are starting to show up as well.

The fish have now been caught as far into the Arctic as Kugluktuk, Nunavut, and as far up the Mackenzie River as Fort Good Hope, crossing the Arctic Circle as they head south.

New DNA technology finds its place in the Arctic

To get a better picture of where the salmon are going, Dunmall has begun applying a cutting-edge technology called environmental DNA, or eDNA. The technique involves taking a water sample and testing it for free-floating bits of genetic material, things like skin cells or scales that have been shed into the water.

It’s a brand new way of determining which creatures are in a body of water without ever seeing them, and due to the wide net it casts, it’s especially useful in the vast and remote Arctic.

“It’s a way of shrinking the size of the Arctic,” says Dunmall.

Environmental DNA is being deployed by the Department of Fisheries and Oceans across the Arctic to keep track of a multitude of species, both native and invasive. It helps fisheries managers focus on a particular area, armed with the knowledge that the species is there.

The government has been developing its capacity for environmental DNA monitoring since about 2013, but interest is picking up. The technology was the subject of a recent meeting between the department’s managers at various levels from across the country, in which they discussed how best to apply it.

“The collection of eDNA is relatively straightforward,” Robert Bajno, a Fisheries and Oceans scientist developing the technology in Winnipeg, told The Narwhal.

“Anyone, with a little training, can take a sample.”

All that’s needed in the field is a clean bag — the bulk of the technical work is done in the lab.

Dunmall’s work isn’t all high-tech, though. Much of her research relies on traditional knowledge.

“Whenever I can, I talk to people about salmon. And people tell me, especially in the Mackenzie communities, that, ‘we’ve harvested salmon forever, why are we now collecting information about them? This isn’t new,’ ” she says.

Some Indigenous languages along the Mackenzie river have words for salmon, but not all. And among those that have a word for the fish, it’s only chum that is named; Dunmall doesn’t know of any local Indigenous words for chinook or coho salmon.

“But then all the other species of salmon started showing up,” she says.

One of the things she learned was that every so often, there would be years when big pulses of chum salmon would show up in the communities of the Mackenzie River. Those years are becoming more frequent. 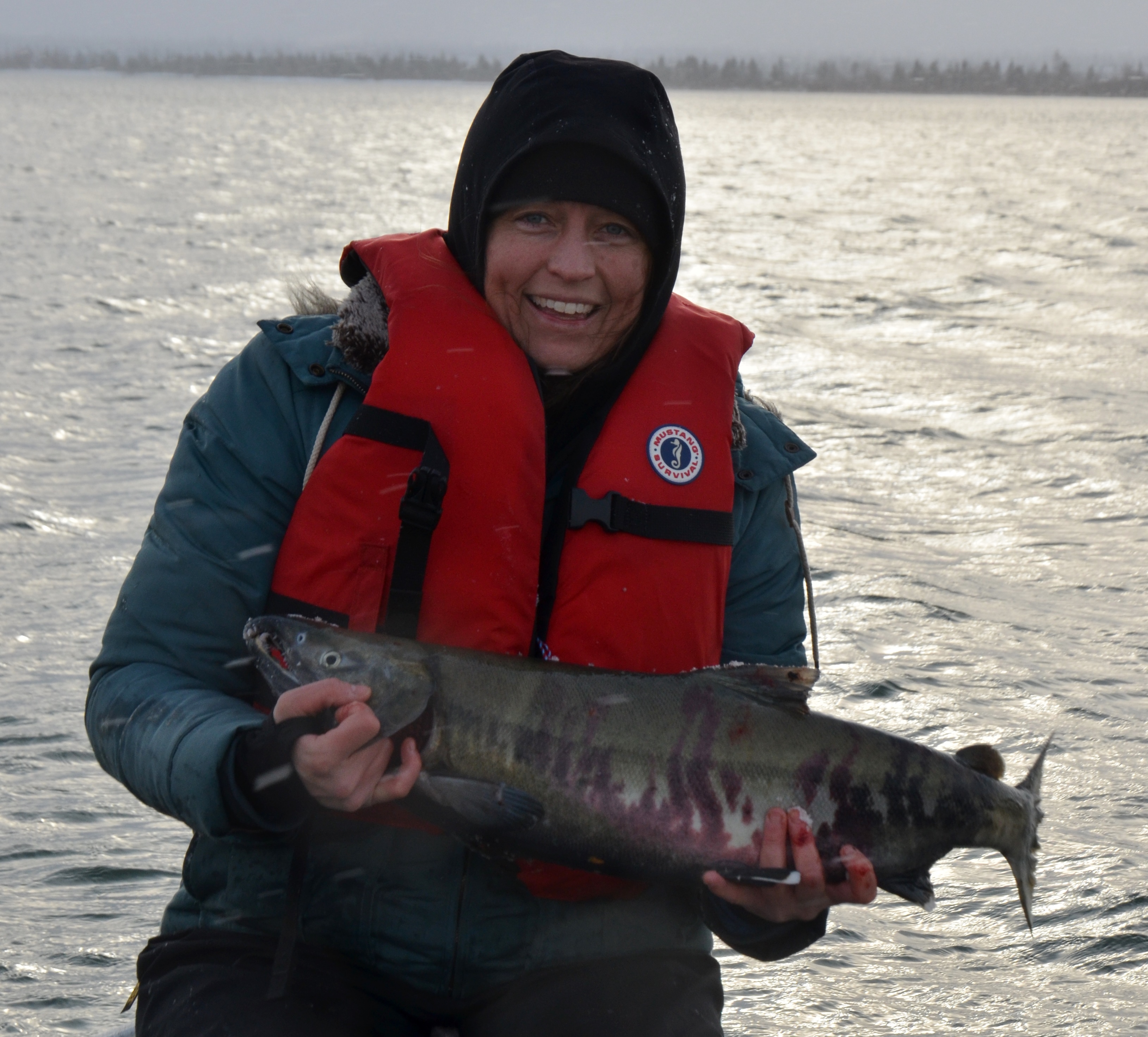 By comparing the traditional knowledge coming from the communities with the results she’s seeing now, Dunmall is piecing together what looks like a steady yet substantial change in the species makeup of Arctic fish populations.

That change could, in turn, help or hinder existing and future fishing economies, especially if the salmon are competing with or preying on other similar fish like Arctic char.

There is also the question of how the increasing numbers of salmon affect the predators (like wolves, eagles, bears or other fish) and prey the growing population interact with.

By cutting open their stomachs, Dunmall has determined the fish are eating when they approach the river, though it is thought that when they enter the freshwater, like other salmon, they stop eating.

That has led to a slew of other questions.

Further, the scientists aren’t even sure yet where the salmon are spending their lives. That question isn’t impossible to answer: a bone in the inner ear of fish, called the otolith, picks up telltale chemicals throughout the fish’s life that can be used to retrace its path through the ocean.

Analyzing the otoliths she’s collecting is another future project on Dunmall’s mind.

Wherever the fish are coming from, they are showing up in more of the Arctic than ever before.

Pacific species have been found as far east as Cambridge Bay, while Atlantic salmon have been making their way northwest through Nunavut.

Continuing change in the Arctic climate could further accelerate the incursions of the new fish. Scientists say before long, Arctic fish stocks will likely look more and more like southern ones, and the ecosystems and people that exist there today will have to reckon with the consequences.

Banner: The northern Yukon Chinook salmon (pictured) are renowned for their lengthy river migration. Now more salmon of more types are being found much further north. Photo: Peter Mather.
We hear it time and time again:
“These are the stories that need to be told and you are some of the only ones telling them,” John, a new member of The Narwhal, wrote in to say.