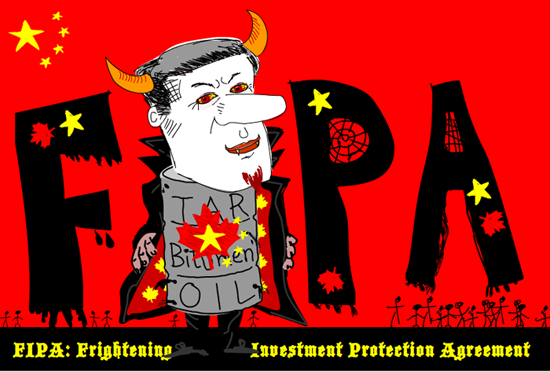 hat's the scariest thing happening just after Halloween? Is it the stomachaches our children will have from eating too many sweet treats? No, it’s the Canada-China Foreign Investment Promotion and Protection Agreement (FIPA), which will automatically come into force on November 2nd, binding Canada for 31 years to come.

Shockingly, the most significant trade agreement since NAFTA is set to automatically go into effect — without a single debate or vote in Parliament. Our political representatives have not even had the chance to say "Boo".
The deal was signed in secret by the Harper Government on September 9th, and quietly tabled in the House of Commons on Sept.26th. No press release to the Canadian media. No briefing to our MPs to announce the details. Just a clock ticking off the 21 sitting days until FIPA comes into force on Nov.2.
But surely the Harper Government has protected Canada’s interests? Unfortunately, no.
FIPA will delight the oil companies, but it places Canadian taxpayers at grave risk for billion dollar lawsuits launched by Chinese investors. And maddeningly, the lawsuits won’t take place in Canadian courts. They will be decided by international tribunals, in secret, behind closed doors. No Canadian or International court will be able to overturn the tribunal's decision.
Why on earth is the Harper Government ceding control? How can it make sense to delegate our sovereignty to international arbitrators in secret tribunals? Isn’t anyone concerned about this? Osgoode Law Professor Gus Van Harten is. His expert opinion is that FIPA may be unconstitutional — the provinces have not agreed to it and Parliament has not been given the opportunity to debate it. Van Harten has called FIPA a straitjacket which will tie future government's hands (for 31 years) from taking responsible action on the environment.
Curiously, the oil sands industry will be prevented from enacting strict environmental and health regulations — lest they be sued for billions by Chinese investors who can claim that the rules have changed and adversely affect their investments.
How convenient! Canada will be ‘off the hook’ as we blame China for preventing us from taking responsible action to reduce carbon emissions. Sadly, this is one more sign of the Harper Government's refusal to accept the reality of climate change and the need to make polluters pay.
FIPA is in essence a sweet deal for corporations but it puts public policy at risk from costly, secretive lawsuits. (Belgium is currently facing a $3 billion lawsuit from one of China’s companies because of a similar foreign investor agreement.) As the Council of Canadians says, “It undermines basic notions of democracy."
What is the solution? Council of Canadians suggests we look to Australia… Against a backdrop of investor challenges to public health measures (which opposed environmental regulations on coal-fired plants) they decided to opt out. They took a firm stand and refused to negotiate these radical investment protections in trade deals. They told big business to take out insurance rather than foist the financial risks onto Australian taxpayers.
Great idea! Let’s do the same thing in Canada. But first we have to get Prime Minister Harper to allow a debate in Parliament.
If you are concerned about FIPA, call the Prime Minister today. And then call your MP, too! Demand that Parliament have the opportunity to debate and make changes to the treaty — or to rip it up and start over. FIPA is a bad deal that will haunt us for 31 years. Let’s do business with China – but let’s make sure it’s in Canada’s best interests.
FOUR WAYS TO TAKE ACTION:
1. Call your MP and the PM!
2. Write a Letter to the Editor of a major newspaper.
3. Sign the petitions below.
4. Tell your family and friends why FIPA is the Frightening Investment Protection Agreement. (Further reading below)
Sign Petitions:
LeadNow: Stop the Canada-China FIPA and Nexen takeover
Council of Canadians: Harper must tear up the Canada-China investment treaty
The Green Party: Stand up against the sellout to China
Clayton Ruby, ForestEthics: AN OPEN LETTER TO HARPER: STOP FIPA
News articles:
Rabble: Open letter to Stephen Harper: Fourteen reasons the Canada-China FIPA needs a full public review
DeSmogBlog: China Investment Treaty "a Straitjacket" for Canada: Exclusive Interview with Trade Investment Expert Gus Van Harten, Part 1
DeSmogBlog: Interview with Gus Van Harten Part 2
DeSmogBlog: Interview with Gus Van Harten Part 3
The Globe and Mail: Gus Van Harten – What if the Canada-China investment treaty is unconstitutional?
The Tyee: China Trade Deal a '31-Year Ball and Chain' on Canada
The Tyee: BC Premier Urged to Consider Fast Legal Action Against China Treaty
Rabble: David Suzuki – China deal and budget sacrifice democracy to short-term goals