‘She was absolutely adored’: Iranian scientist spent her life fighting for Indigenous voices in conservation

Ghanimat Azhdari was born into a nomadic tribe in Iran and was a PhD student at Canada’s University of Guelph, where she was working with Indigenous communities in the boreal forest to map cultural sites. This week, she died along with 175 others aboard Ukraine International Airlines Flight 752, leaving friends and colleagues reeling over her loss

By Jimmy Thomson
Share
Ghanimat Azhdari was born in southwestern Iran into the nomadic Indigenous Qashqai tribe and became an expert in participatory mapping. She was returning to study at Canada's University of Guelph when she died aboard Ukrainian Airlines Flight 752. Photo: ICCA Consortium

A petite Iranian woman stands before a roomful of hundreds of experts in an Egyptian auditorium, wearing a flowing purple dress her mother sewed for her. International delegates at the UN Convention on Biological Diversity summit listen quietly.

Ghanimat Azhdari takes a deep breath, quelling her nerves, and then she begins.

She shows picture after picture of her homeland, of men and women riding mules and horses and camels across sloping Iranian plains while dogs trot alongside them.

“If you care about nature and biodiversity, we are your biggest allies,” she tells the room. “No one knows our territories better than we do, and no one has a bigger stake in protecting and securing our territories and the life within them than we do.”

“The conservation world is finally coming to terms with this.”

Born in southwestern Iran into the nomadic Indigenous Qashqai tribe, to a father who was a local leader, these views about land came naturally to Azhdari. By her thirties she had parlayed her knowledge and passion into an internationally recognized career, fighting to have the voice of Indigenous peoples included in the decisions made about their traditional territories.

“She could slip between two worlds,” explains her PhD supervisor, Faisal Moola, an associate professor in the department of geography, environment and geomatics at Canada’s University of Guelph. “She was very proud of her heritage as a tribal nomadic person; she also had this ability to work very effectively in western science and policy contexts.”

Azhdari excelled in academia, placing third of 900 students in her master’s degree entrance exams for the University of Tehran, Iran’s top university. And in the arid grasslands of southern Iran, Azhdari would sit with elders and other tribe members to map out the places that were important to them: sacred sites, hunting grounds, places where they picked medicinal plants.

She was as comfortable compiling oral histories as she was plotting data points on a satellite image.

“She became an expert in participatory mapping and GIS [geographic information system],” says Holly Jonas, global coordinator for ICCA Consortium, for which Azhdari volunteered. “She was really fundamental to co-developing, with communities, these really sophisticated maps of life in Iran.”

(The ICCA Consortium works to advance territories and areas conserved by Indigenous peoples and local communities. The concept was the basic building block of Azhdari’s research.)

When she died, at 36 — among the 176 people killed in the Ukraine International Airlines disaster in Tehran on Jan. 9 — she had been in the early stages of bringing her integrative approach to Canada.

Azhdari had reached out to Moola in the summer of 2018 to express her interest in joining his lab. She was quickly accepted with high grades and glowing references from around the world.

“We met online and quickly began a correspondence on biocultural conservation, Indigenous rights and social justice,” Moola wrote in an email. “I was immediately drawn to her passion for conservation and deep commitment to advance the rights of Indigenous peoples, both in Iran and globally.” 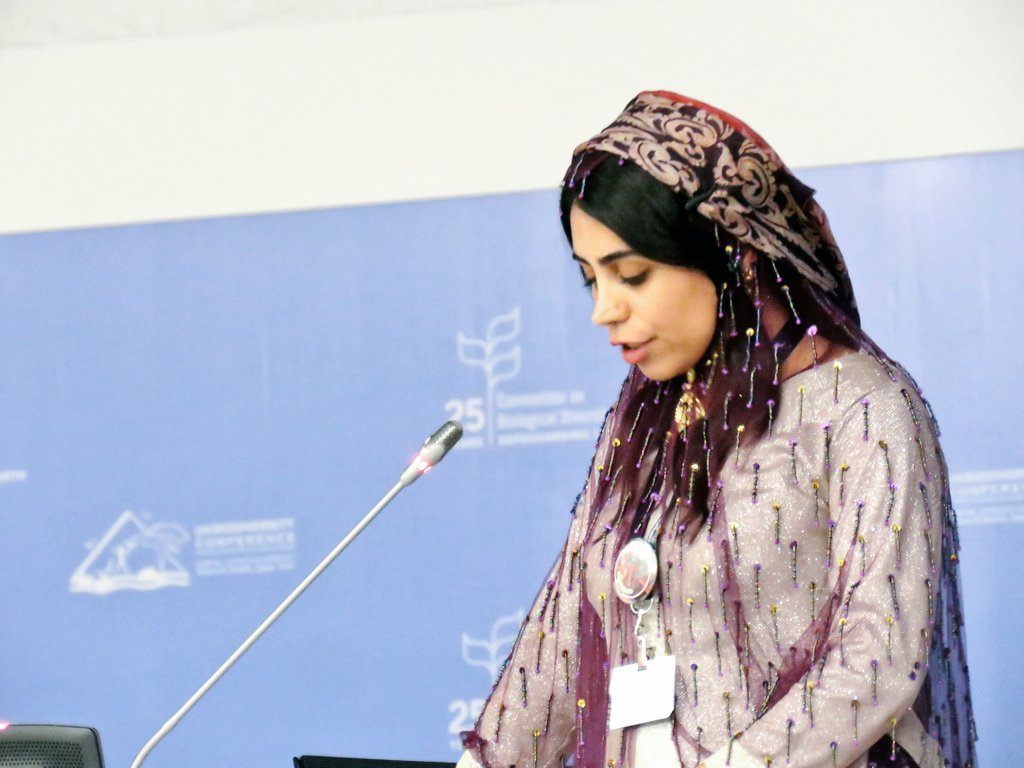 Ghanimat Azhdari wears a dress sewn by her mother as she speaks to a room of hundreds of international delegates at the UN Convention on Biological Diversity summit in Sharm El Sheikh, Egypt, in November 2018. Photo: ICCA Consortium

Upon Azhdari’s arrival in Canada, she found a soft landing at the home of Natasha Bye and her husband, Brad. The couple hosted her for two months, and had made dinner plans just days ago.

Bye recalls with awe the long nights Azhdari would spend working at her desk, after attending her classes and working as a teaching assistant. She recalls the loving relationship she developed with their cat. And she turns to fury at the realization that Azhdari, with all of her promise, love and dedication, is gone.

“What burns for me is, just, she had an intention in the world, she had purpose; she had a major trajectory, a very meaningful one,” Bye says. “To have that ripped out of this plane of existence is just brutal. It’s so hard to wrap one’s mind around that. Hard to let that go.”

Jonas echoes Bye in her sorrow at what could have been. “I could see her doing any number of things,” she laments. “Leading the UN — whatever she wanted to do.”

‘Her nickname was FAO’

Elham Firzoonia met Azhdari during their undergrad years, when they roomed together. The two became close friends and remained so for the rest of Azhdari’s life.

Even then, more than 15 years ago, Azhdari knew what she wanted to do, and why.

“Her nickname was FAO,” Firzoonia says, a reference to the UN’s Food and Agricultural Organization that stuck with Azhdari because of her productivity and generosity.

Azhdari’s work brought her all over the world, into contact with a global community of professionals. On a tribute page set up by the ICCA Consortium, responses flooded in from around the world — Madagascar, Canada, Iran, Ethiopia, the United States, Venezuela, the United Kingdom, Georgia, South Africa, Australia, Kenya, Japan, France, Italy, Malaysia.

Despite her global reach, her focus was turning to an idea that’s gaining traction in Canada: working with Indigenous communities in the boreal forest to map their important cultural sites, which can then be used in a bottom-up conservation planning process, “putting power back in the hands of indigenous peoples over their territories and over their lives,” Jonas says.

‘She was able to achieve enormous, enormous things’

A few weeks after her return to Canada, Azhdari was planning to go into the field to meet with her research partners in the Miawpukek First Nation and Parks Canada, in Newfoundland, to get the work started.

“She was fighting very hard to remove many of the policy barriers that prevent Indigenous peoples from moving forward with their own ideas for how to protect and manage their territories,” Moola says. “She was able to achieve enormous, enormous things.”

Eighty per cent of biodiversity globally is found on Indigenous territories. The Convention on Biological Diversity’s 2011-2020 strategic plan expires this year, and Azhdari was fighting to make sure the next plan would incorporate Indigenous perspectives as governments decide how to meet those new goals.

Though most of Azhdari’s work was behind the scenes, developing the data to guide that process, she was also a strong spokesperson for her cause. She was featured in a video released by the ICCA Consortium in 2019, sitting among bushels of wheat, wearing the dress her mother sewed, the same one she wore when she spoke in Egypt. 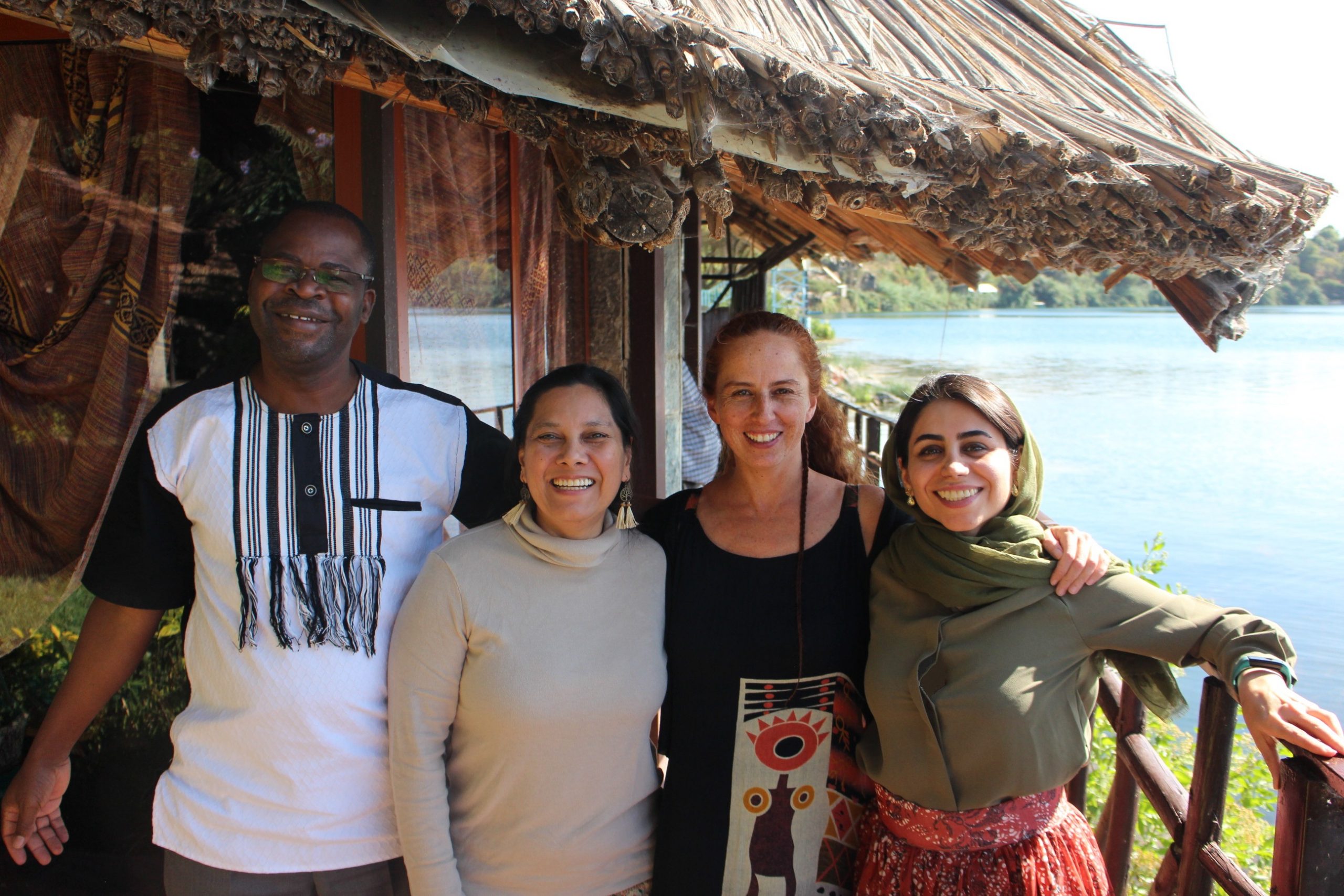 Azhdari’s work was ‘about the best of humanity’

Her integration of Indigenous world-views with western scientific approaches was an example to other students in her close-knit cohort at the University of Guelph.

“She was absolutely adored,” Moola says. He recalls that she would sometimes interject in discussions, gently correcting Moola when he would weigh science over the beliefs of Indigenous peoples.

Moola has already spoken to members of Azhdari’s cohort, to figure out ways to carry her work forward. The team has vowed to complete and posthumously publish some works-in-progress, including a book chapter, and Moola is looking into the possibility of recruiting another member of the Qashqai tribe as a student.

“The work that Ghanimat was doing is about the best of humanity,” Jonas says.

Azhdari concludes her presentation in Egypt with a photo of an elderly bearded man wearing a woolen cap and a mischievous smile. It’s a tribute to Mohammad Taghi Farvar, a renowned Iranian conservationist who brought her up through the world of conservation science. He died in 2018, but is fondly remembered as a leader and pioneer in the field.

“He was like a father or grandfather to all of us, and to the movement,” Jonas says, but his relationship to Azhdari was even closer. “I actually thought he was her grandfather at first,” she laughs.

Jonas recalls how Azhdari would take care of Farvar, how attentive she was. When he died, the entire community he had helped build was in mourning, but she was hit particularly hard.

“How difficult this is,” Azhdari wrote in memory of her late mentor. “You have someone, while you know that you don’t have [them].”

*Article updated at 4:15 p.m. PST on Jan. 10 to clarify that it’s the Convention on Biological Diversity’s 2020 strategic plan that’s expiring, not the convention itself, and to indicate Azhdari was working in a volunteer position with the ICCA Consortium.

Banner: Ghanimat Azhdari was born in southwestern Iran into the nomadic Indigenous Qashqai tribe and became an expert in participatory mapping. She was returning to study at Canada's University of Guelph when she died aboard Ukrainian Airlines Flight 752. Photo: ICCA Consortium
We hear it time and time again:
“These are the stories that need to be told and you are some of the only ones telling them,” John, a new member of The Narwhal, wrote in to say.

‘A century in the making’: Canada adds federal protection to Indigenous-declared marine refuge

When the Mamalilikulla First Nation unilaterally declared an Indigenous Protected and Conserved Area in their...