Three-quarters of the nation's territory lies within 250 metres of an industrial disturbance. A potentially precedent-setting court case on this 'death by a thousand cuts' could disrupt B.C.'s multi-billion dollar natural gas industry

By Christopher Pollon
Share
Chief Marvin Yahey shows an Ecotrust report that details the cumulative impacts in the territory of Blueberry River First Nations at a news conference in 2016.

After almost a year of negotiations with the province, a northern B.C. First Nation is returning to court on May 27 — kickstarting a potentially precedent-setting case against B.C. that could disrupt the multi-billion dollar natural gas industry if successful.

The Blueberry River First Nations traditional territory, located in the Peace River region of northeastern B.C., sits atop one of the largest deposits of natural gas on the planet. Over the last 50 years, the region has been transformed beyond recognition by run-away cumulative impacts from oil and gas, forestry, hydro and mining.

A 2016 report based on B.C. government data found that almost 75 per cent of the territory now lies within 250 metres of an industrial disturbance. 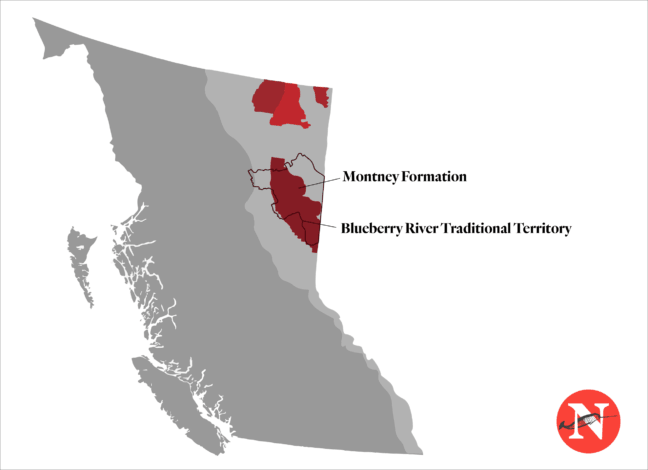 The traditional territory of the Blueberry River First Nations and the Montney formation. Illustration: Carol Linnitt / The Narwhal

Legal action by Blueberry dates back to 2015. Last March, Blueberry adjourned the trial and entered mediation with the province in an attempt to solve the ongoing crisis on the land, likened by one lawyer to a “death by a thousand cuts.”

The year-long negotiations and trial were born out of desperation to save the handful of critical wildlife areas left in their territory, said Chief Marvin Yahey.

He said solid progress was made to directly involve Blueberry River First Nation in resource decisions and managing development impacts, but the province has since stepped back from this collaboration — which means the trial is back on.

“Instead of pursuing reconciliation and negotiating a solution, we are forced to seek a court-imposed order to protect our treaty rights, which may prohibit further taking up of land in our territory until our treaty rights are met,” Yahey said.

He added that they did not want to go back to court, but were forced by the government’s abandonment of a cooperative agreement reached last November to allow Blueberry more input into how resource decisions were made in their territory.

A Blueberry victory could be disastrous for the government: while B.C. was in negotiations with Blueberry, they were also working to reach a deal with a Shell-led consortium whose LNG Canada plant on the B.C. coast will necessitate a new boom of natural gas development across much of Blueberry territory.

If the First Nation wins, the court could order the province to suspend the issuing of permits for land clearing and other activities critical to oil and gas, until such time that the province meets its treaty rights.

Maegen Giltrow, council for the Blueberry River First Nations, couldn’t comment on case specifics but confirmed that it will take about 100 days for the trial to unfold, ending after Christmas. A decision is expected some time around mid-2020.

Blueberry’s litigation is unique. Instead of focusing on a single industrial impact, the case is based on thousands of individual authorizations, which have collectively degraded the land and water over time. At the heart of the trial is the idea that the province has breached the terms of Treaty 8, which Yahey’s forebearers signed in 1900.

Under Treaty 8, government has a right to take up land for settlement, but also has a corresponding duty to protect a way of life. The First Nations signatories of the treaty were adamant at the time that they would be able to continue their core way of life the way no matter what, something that is getting harder to do.

The report also found that almost 70 per cent of Blueberry traditional territory is now covered by active petroleum and natural gas tenures. There are 4,676 abandoned oil and gas wells in the territory.

Banner: Chief Marvin Yahey shows an Ecotrust report that details the cumulative impacts in the territory of Blueberry River First Nations at a news conference in 2016.

Wet’suwet’en land defenders and supporters are occupying a Coastal GasLink pipeline worksite on Gidimt’en clan territory in northwest B.C. in an effort to prevent drilling...

From the Greenbelt to the Greens

The first stories from our new Ontario bureau have arrived. Here’s what Emma McIntosh and...

Whether it’s organizing fundraisers or volunteering as a Big Sister, Kathryn’s passion for community-building is...

Canada’s biggest city is overdue for a public transit expansion, but residents of Leslieville-Riverside and...

For our budget to add up, we need to reach 3,700 members by Oct. 31. Will you help make our independent environmental journalism available to thousands of others? Bonus: all our members get charitable tax receipts.

Yes, I can help