The return of the caribou

The community of Old Crow, Yukon, is ecstatic at the sight of the Porcupine caribou herd — one of the last large, healthy, migratory caribou herds on the planet. But these caribou are threatened by oil drilling in the Arctic Refuge

Dozens of people spring from their seats and hurry for the doors of Old Crow’s community hall, sweeping me along. The caribou stew I’d just ladled into my bowl sloshes dangerously around as I stumble out into the sunlight. The Porcupine River is swollen with snowmelt from the Richardson and Nahoni mountains. Chunks of ice wash downstream. Fifteen caribou struggle against the current, the ripples in their wake catching the sun. 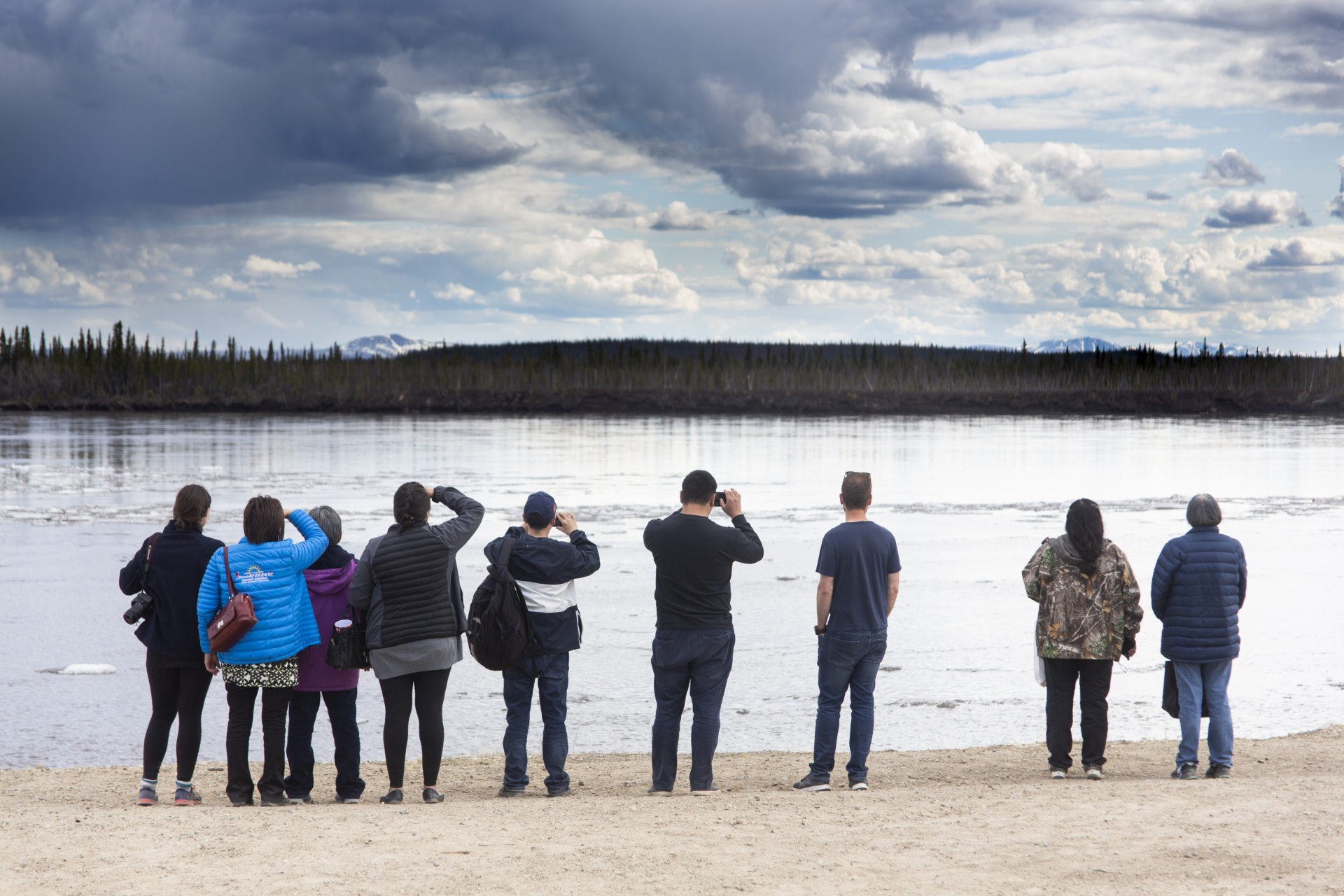 After five minutes of swimming they reach the far bank. The caribou scramble out from the river and vanish into the spindly spruce trees. People are beaming. The caribou have finally returned.

Visits to Old Crow, Yukon, are the best part of my job campaigning against oil drilling in the calving grounds of the Porcupine caribou herd with the Yukon chapter of the Canadian Parks and Wilderness Society. I’d come to the Gwich’in community in the Yukon’s northern corner for “Caribou Days.” Locals and visitors compete to fry the best bannock, skin a caribou leg the fastest or toss the most rings onto a set of antlers. In the evenings we feast on fresh caribou then jig and waltz to fiddle music. 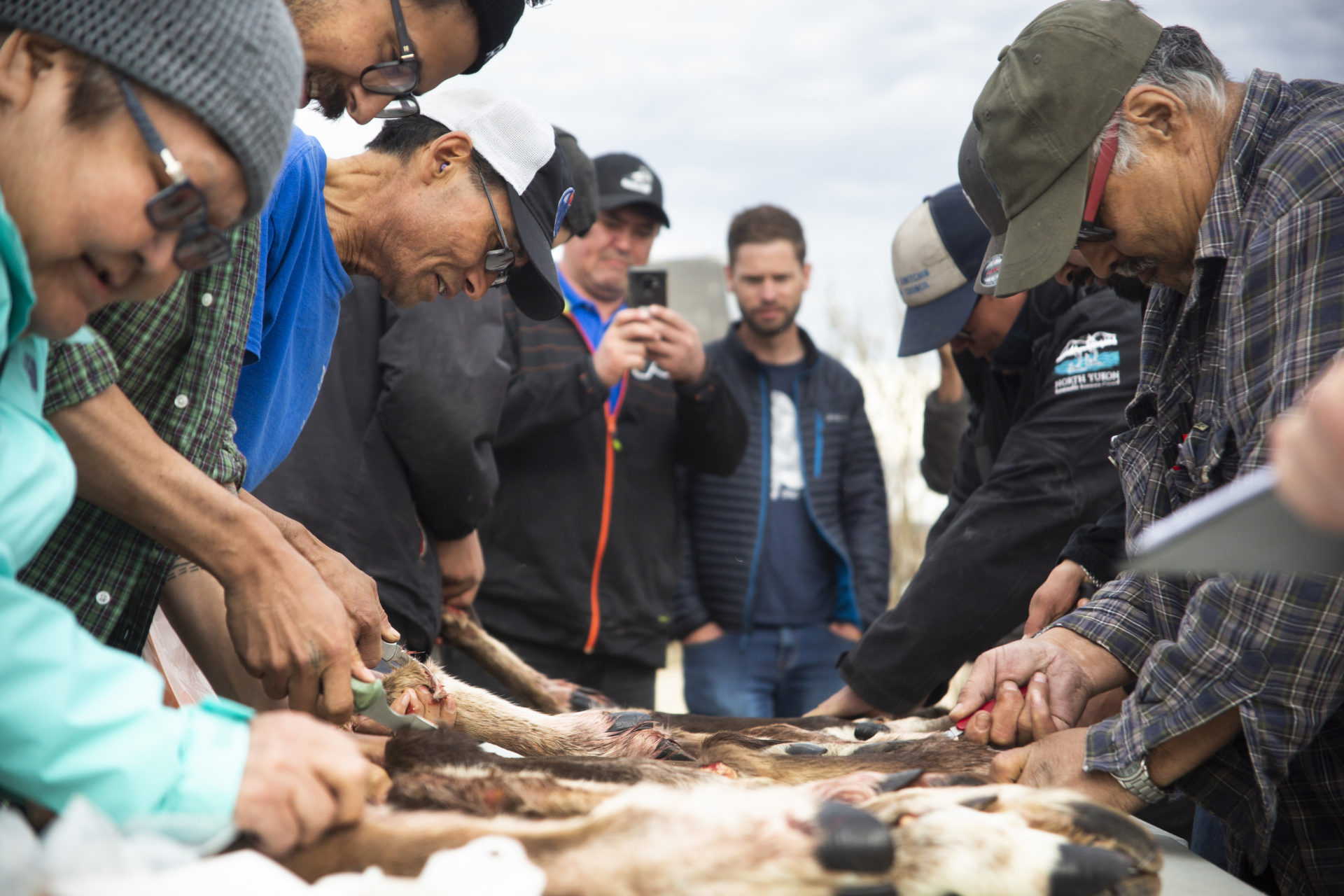 A caribou leg-skinning contest is one of the many community competitions held during Caribou Days in Old Crow, Yukon. Photo: Malkolm Boothroyd

Caribou Days is meant to celebrate the return of the herd, as caribou flood north toward their calving grounds in the Arctic National Wildlife Refuge. Except lately, caribou have been hard to come by. People here have been starving for caribou meat.

Last spring was a poor time for caribou around Old Crow and during recent autumn migrations the herd hasn’t lingered around the community. Caribou are critical to the culture and subsistence way of life of the Vuntut Gwitchin and essential to food security in Old Crow, where a bag of apples can cost $17 and two litres of milk costs $9.99.

Nobody is certain why the caribou have been sparse of late. I’ve heard people suggest low-flying cargo planes are disturbing caribou, while others wonder if changes in the climate and increasing shrub growth could be factors. The scarcity of caribou around Old Crow is a paradox, because the herd is at a record high. However, the recent meat shortages the Vuntut Gwitchin have experienced foreshadow what could happen should the health of the Porcupine caribou herd take a turn for the worse, like many other caribou herds across the North. 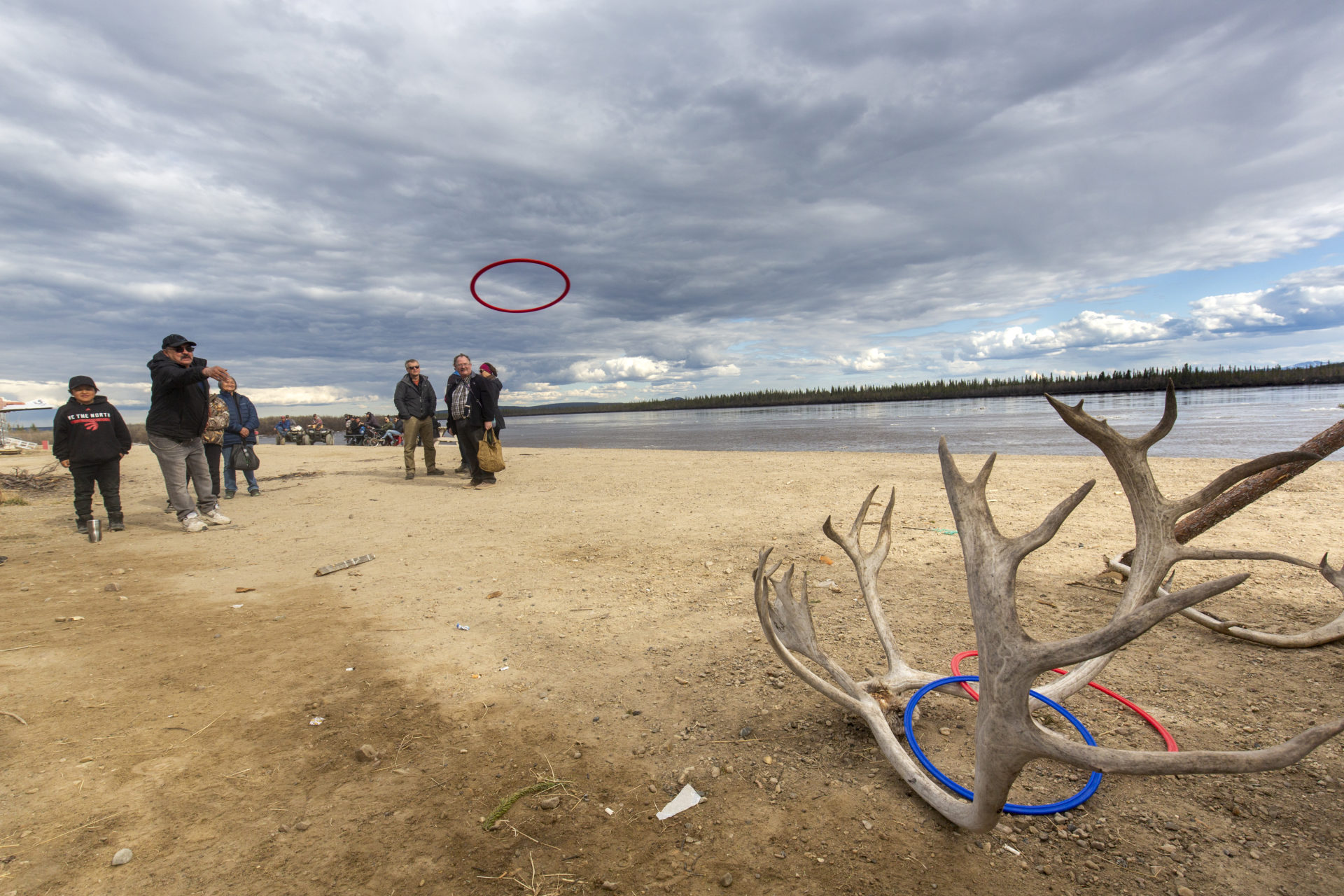 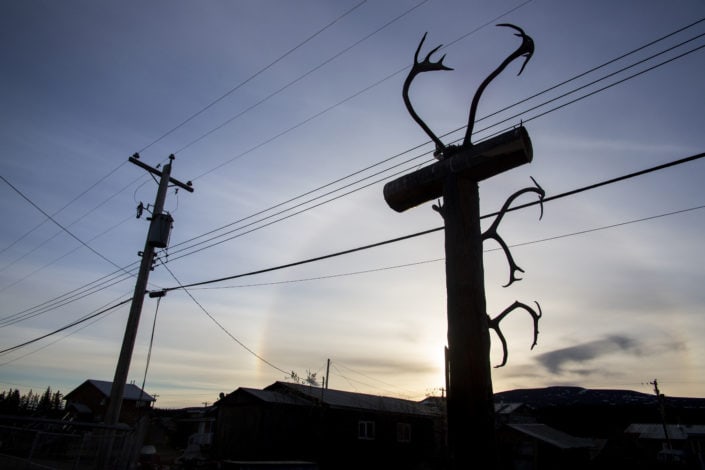 In 2017, the U.S. government opened the coastal plain of the Arctic Refuge — the heart of the herd’s calving grounds — to oil drilling. Now the administration is fast-tracking an environmental review that would auction away the birthplace of the herd to the fossil fuel industry.

For decades the Gwich’in have led the movement to protect the calving grounds — efforts that have ramped up since 2017. Lorraine Netro, Norma Kassi, Chief Dana Tizya-Tramm and countless other Gwich’in advocates have made journey after gruelling journey to Washington, D.C., to call for protecting the Arctic Refuge. In March, Chief Tizya-Tramm testified before the U.S. House of Representatives, telling lawmakers “development on the coastal plain amounts to the cultural genocide of the entire Gwich’in Nation.”

It’s in large part thanks to the work of the Gwich’in that the Arctic Refuge stayed off-limits to oil and gas for as long as it did. Once again, the Gwich’in and environmental groups are working to keep drilling out of the refuge by scrutinizing the U.S. Government’s environmental review process, building support for wilderness legislation on Capitol Hill and campaigning for banks to withhold financing for drilling.

The Porcupine caribou herd is one of the last large, healthy, migratory caribou herds on the planet. Farther east in the Arctic, the Bathurst and Baffin herds have declined 96 per cent and 98 per cent over the past 30 years. Collectively the two herds have lost close to 700,000 caribou.

The Fortymile caribou of the central Yukon and Alaska are a shadow of their former selves — once so plentiful the herd could take ten days to cross the Yukon River, bringing the steamships that plied back and forth to the Klondike goldfields to a halt. The fate of many caribou herds is reflected in the alarming loss of biodiversity around the planet. That makes the Porcupine caribou herd’s vitality all the more incredible, and protecting the herd even more critical.

The late-evening sun, still high above the horizon, gleams through one of the windows in the community centre and casts a square of dazzling light in the centre of the hall. Lorraine Netro lays out caribou antlers, a hide and spruce boughs on the hardwood floor. Many of the people filtering in are dressed in vests and mocassins made from caribou or moose hide and decorated with hand-beaded flowers. There’s a fashion show tonight, then a talent show and another dance. 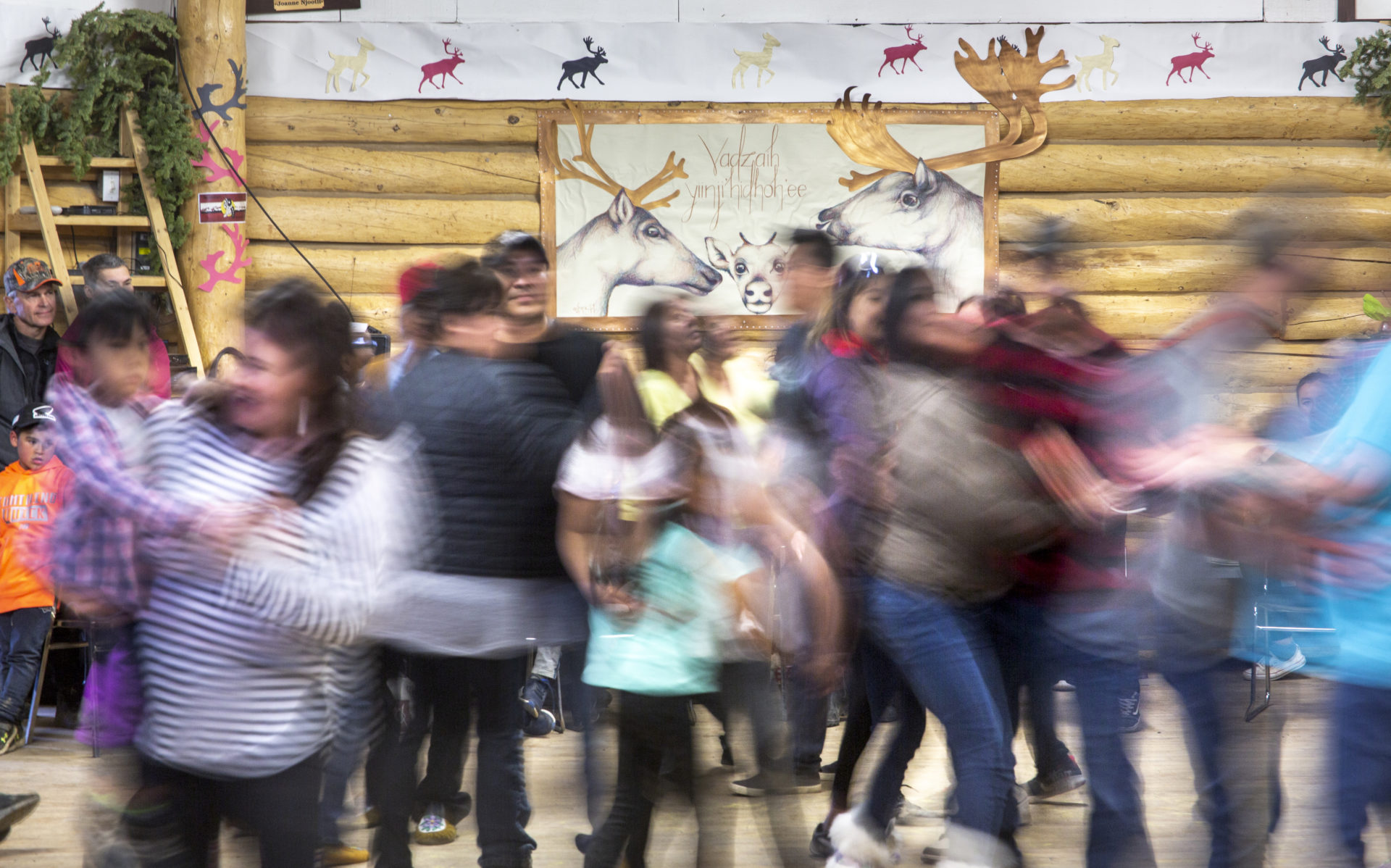 The return of the caribou have lit up the weekend’s festivities and are a reminder of why the Porcupine caribou herd is so important to life in Old Crow. Still, it’s hard to forget the danger that lies ahead. Keeping oil drilling out of the Arctic Refuge calls for monumental efforts from the Gwich’in, and groups like ours that support them in this campaign. Securing permanent protection for the calving grounds could take years, maybe even decades. That’s a long time. But for tonight, it is time for more jigging and fiddle music.

Banner: A bull caribou walking through the fog on the coastal plain of the Arctic National Wildlife Refuge. Photo: Malkolm Boothroyd
We hear it time and time again:
“These are the stories that need to be told and you are some of the only ones telling them,” John, a new member of The Narwhal, wrote in to say.