In early September, Prime Minister Justin Trudeau announced more than $360 million in funding for roads to service mining operations in two remote regions of the Yukon.

There’s just one catch: most of those mines haven’t even been approved yet.

Some worry the influx of investment — $247 million from the federal government and $112 million from the territory — handcuffs the region to mining development that hasn’t been demonstrated to serve the community’s long-term interests.

Don Reid, conservation zoologist for the Wildlife Conservation Society of Canada, said the timing of the announcement is problematic and calls the objectivity of the mine review process into question.

"By having invested in these existing roads, the Yukon territorial government would in the future be loathe to refuse ongoing development of…new mines that these infrastructure dollars were specifically earmarked to help,” Reid told DeSmog Canada.

“They have biased their supposed neutrality in having the final say on future environmental impact assessments."

The Yukon Resources Gateway Project, described as providing upgrades to 650 kilometres of existing roads, bridges and culverts, is aimed at facilitating year-round access to the potential mines and other undeveloped mineral deposits.

“Modern infrastructure is key to developing and properly managing the incredible natural resources we have at our fingertips," Trudeau said.

The resources Trudeau is refering to include the proposed Selwyn-Chihong lead-zinc mine and Golden Predator's 3 Aces gold mine in the Nahanni range near the border with the Northwest Territories.

In the Dawson range south-east of Dawson City, they include the Goldcorp Coffee gold mine, the gold, copper, molybdenum and silver Casino mine and Copper North’s Carmacks Copper mine. 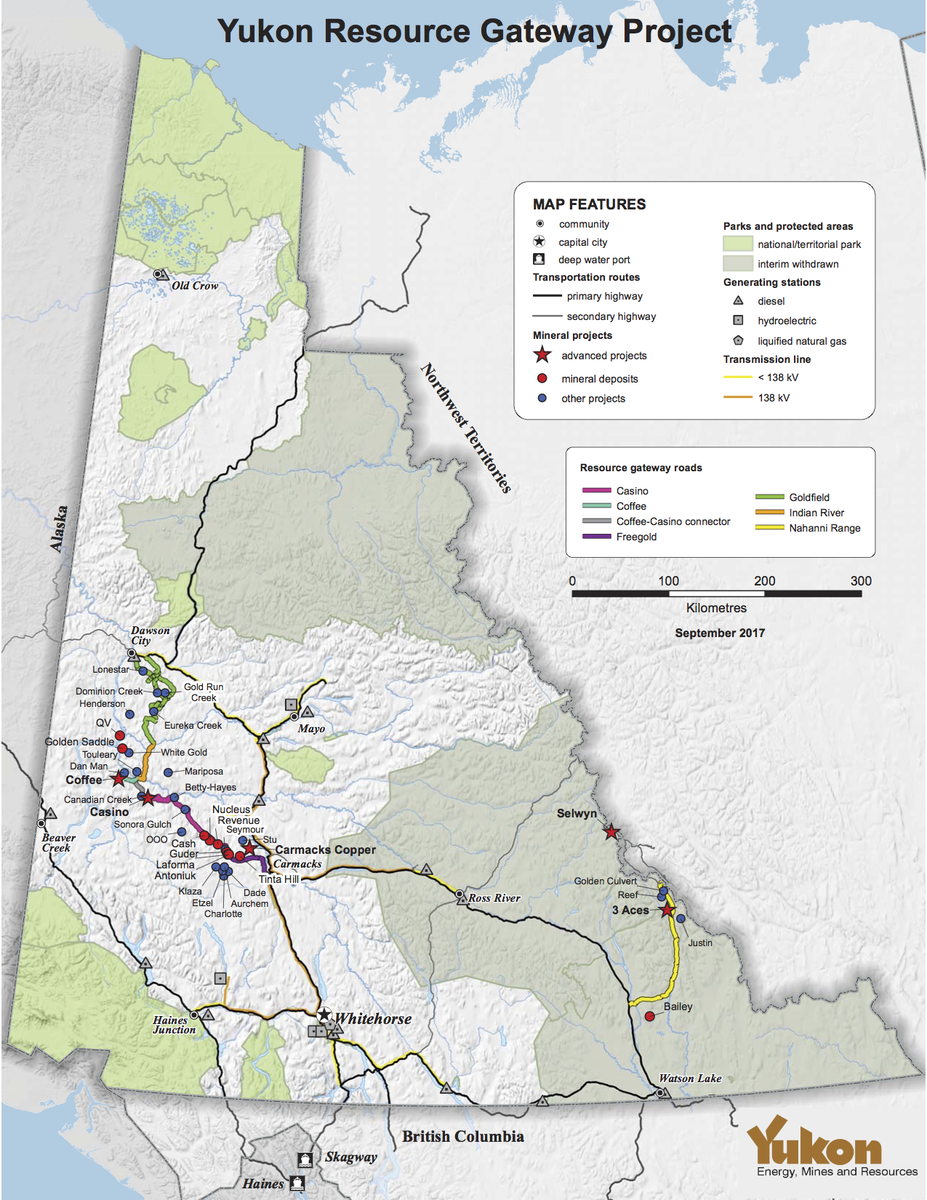 The projects are all in various stages of review with the Yukon Environmental and Socio-economic Assessment Board (YESAB). Goldcorp’s application for the Coffee gold mine in particular was suspended this past July, for failing to adequately consult with affected First Nations.

Local First Nations and conservation groups alike have doubts about the claimed benefits of road construction, and see significant threats to the local landscape and wildlife from development of both the roads and mines.

Of major concern to the Little Salmon Carmacks First Nation is the potential extension and upgrade of a road in the nation’s traditional territory, chief Russell Blackjack told DeSmog Canada.

“Our members have serious concerns with both the extension of the Freegold Road into un-roaded territory, and with the proposed Casino Mine the road might serve,” Blackjack said.

The Casino Mine, currently facing the territory’s most stringent level of review, would be the largest mine in the Yukon’s history and contribute more annual greenhouse gasses than all of the Yukon.

The 22-year project would also entail the construction of the world’s largest wet tailings dam — which, at 286m, would become the highest structure in Canada west of Toronto — using the same technology employed by the Mount Polley mine which suffered a massive dam failure in 2014.

The Casino Mining Corporation is required to submit the Environmental and Socio-economic Statement component of its project proposal to the Yukon assessment board by December 31, 2017.

“We may decide to oppose the project,” Blackjack said. 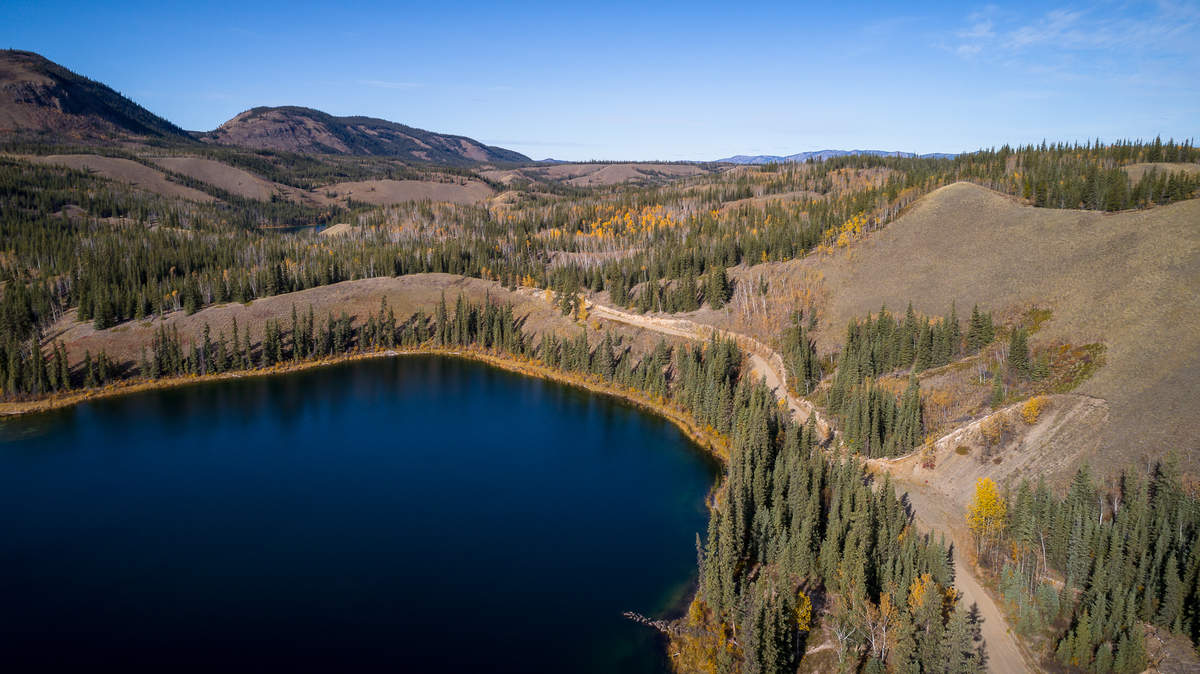 Reid said increased road access in both the Dawson and Nahanni ranges is of particular concern for mountain caribou — both the Forty-mile and Nahanni herds — moose, wolverine and grizzly bear.

“These will be affected primarily because increased and improved access will result in increased hunting pressure and reduced use of some key habitats by these animals as they try to avoid the disturbances caused by the roads."

The Klaza caribou herd’s range sits squarely in the Dawson range, and seems positioned to experience a significant impact from any increase in human activity in the area as well. 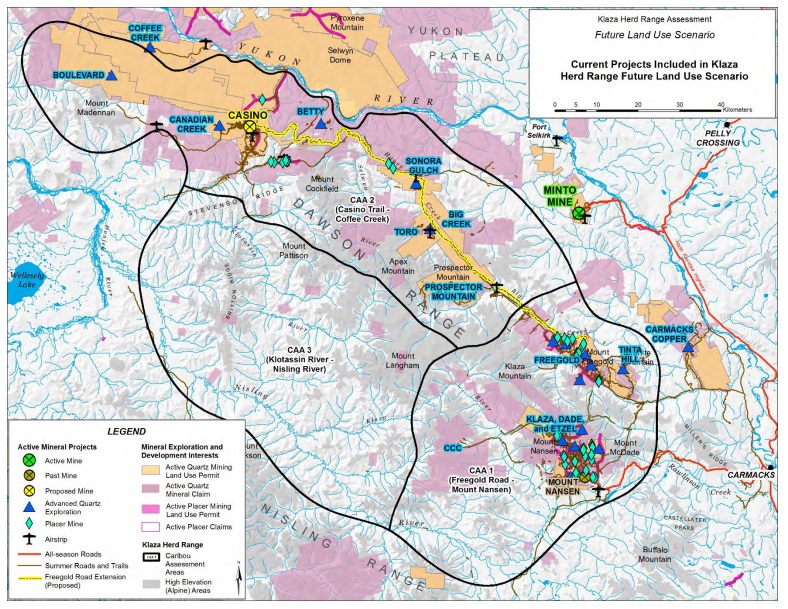 “Because once the roads go in, you can kiss a lot of [habitat] goodbye,” Rifkind said.

“The caribou don’t necessarily avoid the roads but they won’t linger because they can be easily predated. It’s a ‘wolf highway’ effect, where wolves and human hunters can see for miles and travel quickly.”

Blackjack said beyond caribou and moose concerns in his nation’s traditional territory, many of the region’s waterways are salmon bearing.

“There are a lot of creeks that they have to bridge across. Once they open the roadway there’s the potential of six mines opening up, and it will provide easy access to placer miners too. As it is, that place is just staked right out (for placer mining).”

Beyond the potential impacts on wildlife, there is the lingering question of who ought to pay for the development and upkeep of the roads.

While federal investment in infrastructure is far from new to the north, Rifkind said the new funding announcement is different.

“This is not for Yukoners, these are resource roads,” he said. “While the proposed routes are not cast in stone, none of the roads lead to communities.”

“Taxpayers are basically funding to upgrade these roads for companies,” Rifkind said, noting one of the companies, Selwyn Chihong, is a Chinese State-Owned Enterprise.

In September Yukon premier Sandy Silver posed with a one million dollar gold bar recovered from the exploration phase of the 3 Aces project.

“If they’re so profitable that just at the exploration phase they can produce a million dollar gold bar, are taxpayer dollars required to upgrade a road that by and large only they are using?” Rifkind said.

Chris Rider, Executive Director of the Canadian Parks and Wilderness Society’s Yukon chapter, said the mining projects come at a time when the conservation of development-free, roadless spaces is of increasing importance.

“We’re talking about valuing a handful of mining projects over our wild spaces at a time when wilderness is disappearing at alarming rates around the world,” Rider told DeSmog Canada.

The benefits from these projects to the territory are short-lived, especially given the current mining royalty regime, Rider said, adding communities are often left with scarred landscapes and non-public road infrastructure which the public is left to maintain.

“Imagine instead if we had taken those funds and dedicated them to an innovation fund to invest in sustainable entrepreneurship across the territory — twenty years down the road we would have been so much further ahead environmentally and economically.”

Even if both the roads and mines go ahead as planned, the socio-economic impacts on affected communities may not be what they were intended.

“I don’t think we have the sustainable resources in the community to hold a big population boom like that,” he said.

There is no official timeline for consultation and review of the Yukon Resource Gateway Project, but Blackjack said that process should only proceed with both the Yukon government and First Nations negotiating.

“We have a letter from the Premier stating that the project components in First Nations traditional territory will not proceed in the absence of project agreements with those First Nations,” Blackjack said.

“So we take that as word from the Yukon government to uphold our end of negotiations in a trusting manner.”’

That Time Trudeau Announced $360 Million for Roads to #Yukon Mines That Haven't Been Approved Yet https://t.co/2rgb95zIa6 @YukonConservati

Matt Jacques is a journalist, photographer and social scientist living in Canada’s Yukon Territory. With a Ph.D. in experimental psychology…