The project, which will generate enough energy to power 135 homes and $175,000 in annual revenue, is being celebrated as an important milestone in the nation’s economic independence

There were times over the last five years, when Chief Russell Myers Ross wondered whether his dream of creating a solar farm would ever become a reality.

There were studies and more studies, funding applications, community discussions and back and forth talks with BC Hydro and the provincial government. Then there were little hitches, such as deciding on the Riverwest Sawmill site, 80-kilometres west of Williams Lake, and then discovering that one parcel was partially owned by another company.

Once construction started, with apprentices from the six Tsilhqot’in communities learning the trade, the weather refused to cooperate, even though the Chilcotin is among B.C.’s top five solar hotspots. Instead of the expected sun, torrential rains brought monsoon conditions to the area in July as construction workers tried to lay cables in muddy trenches.

“You feel like it’s never going to be done,” said Myers Ross, vice-chair of Tsilhqot’in National Government and chief of Yunesit’in First Nation.

Last month the 3,456 panel solar farm held its grand opening and is now waiting for BC Hydro to complete the hookup so power from the sun can flow into the grid.

The Tsilhqot’in company that oversaw the project, Dandzen Development Corporation, has a 25-year electricity purchase agreement with BC Hydro.

Susie Rieder, BC Hydro spokesperson said there is not yet a firm date for “completion of the interconnection process.”

The solar farm is one of five shovel-ready projects with “significant Indigenous Nations involvement” approved last year as part of a benefit agreement with BC Hydro. The program was suspended indefinitely when, following approval of the Site C dam on the Peace River, the province ordered BC Hydro to reconsider its power procurement policies.

Myers Ross is happy that the Tsilhqot’in project squeezed in under the wire and, even without the final connection and despite the construction challenges, he is breathing a sigh of relief.

“This is a really rewarding one for me personally,” he told The Narwhal. 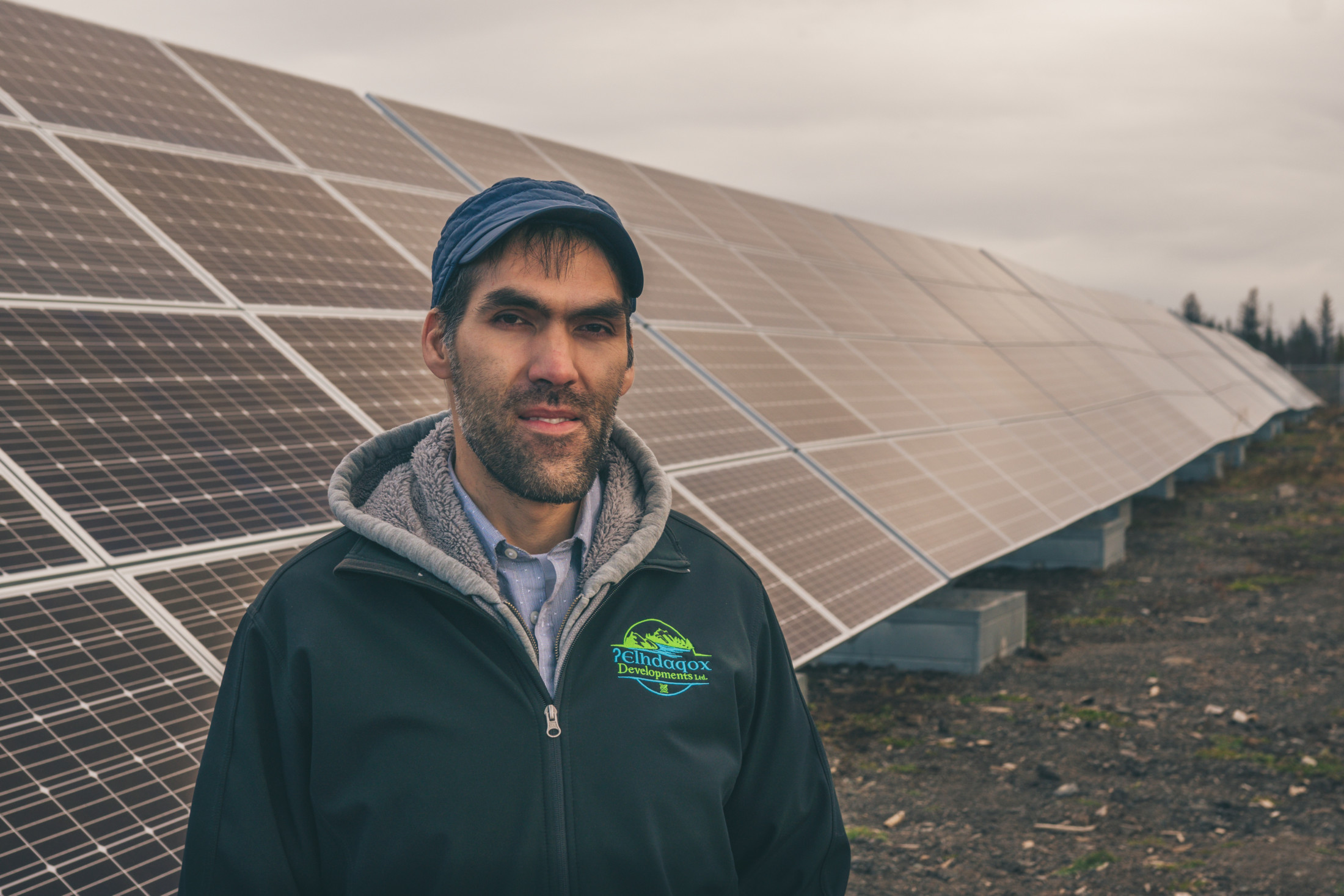 “This is the first project to generate our own source of revenue for our Tsilhqot’in organization and the community, which is significant for our overall goal of self-sufficiency,” he said.

The solar farm, with panels lined in 216 sections on a two-hectare site, will provide 1.25 megawatts, creating 1,500 megawatt hours of power annually, which is enough to power about 135 homes.

The project is expected to generate about $175,000 a year in annual revenue.

“It’s not a big moneymaker. It is sort of modest, but it gets us on our way. It’s a big accomplishment and it is one of the first building blocks to getting revenue and being able to use the money where we want to allocate it, with no strings attached,” Myers Ross said.

The project is the largest solar farm of its kind in B.C. and the only one that is 100 per cent owned and operated by a First Nation.

The final result is “pretty impressive,” said Gabe Pukacz, a Yunesit’in councillor and construction manager for the project.

Specialists and companies familiar with solar installations, such as EcoSmart, were hired to help with technical aspects, but many of the skills were learned by the on-the-ground workers as the job progressed, Pukacz said.

“It was pretty good. The workers made life easy … All my labourers were Tsilhqot’in,” he said.

Now, everyone is waiting for the hookup. Pukacz said.

“It will be interesting to find out what the capabilities of producing power will be during the least efficient sunlight hours in November,” he said.

‘A huge economic win for our nation’

“Energy and electricity has been lacking in the territory for a long time, despite one of the longest stretches of hydro in Canada, so we welcome the opportunity for business and to improve the well-being of our people,” Alphonse said in a news release.

Chief Joe Alphonse of the Tl’etinqox Nation stands outside the band office in Anaham, B.C. Photo: Louis Bockner / The Narwhal

In B.C., Indigenous led solar projects include plans by the Upper Nicola Band for a huge solar farm on the Quilchena Reserve and the T’Souke First Nation on Vancouver Island that has been providing solar power to homes on the reserve for more than a decade.

Even with power expected to be generated by Site C, there is increasing evidence that more renewable energy sources will be needed as B.C. makes the transition to clean energy. A University of Victoria study, released this week, found that in order to electrify transportation, which produces one third of the province’s greenhouse gas emissions, the province will need to generate up to 60 per cent more electricity.

In a move in that direction, the provincial government announced this week that, as part of its CleanBC program, $16.5-million will be available to remote, diesel-dependent communities to help with capital costs of renewable electricity projects. Most of the communities eligible to apply for Renewable Energy for Remote Communities funds — which are available through Coast Funds and the Fraser Basin Council — are Indigenous and off-grid.

For the Tsilhqot’in and others living in the surrounding area, the solar farm will beef up the weak 250-kilometre power line that runs from Williams Lake to Tatla Lake, which has prevented some industries from locating to the area and has forced some businesses to partially rely on diesel generators.

Other projects may follow as the Tsilhqot’in Nation Government is currently creating a clean energy plan, looking at the territory and considering what might be available from micro-hydro, geothermal and biomass.

The push for economic independence comes in the wake of the 2014 landmark title case, when the Supreme Court of Canada ruled that the Tsilhqot’in hold Aboriginal title to about 1,750 square-kilometres of land.

The Tsilhqot’in solar farm on the former site of the Riverwest Sawmill, 80-kilometres west of Williams Lake. Photo: Kai Nagata

Other economic development projects under consideration include boosting tourism in Xeni Gwet’in, a mobile concrete batch plant to help with housing and infrastructure construction and a chip mill.

The need to look for new avenues of revenue that fit with Indigenous culture and traditions has been underlined by the Tsilhqot’in in light of crashing caribou populations, lack of salmon and hunting restrictions on moose following the 2017 wildfires that saw wildlife populations reduced or moving to other areas.

“The solar farm is a huge economic win for our nation,” Alphonse said.