Robert Shirkey has a simple idea that he thinks could change the world, and he’s looking for a little help.

It all began with a phone call from his 95-year-old grandfather in Saskatchewan, he explains from the Toronto office of Our Horizon, a non-profit organization dedicated to effecting climate change legislation at the municipal level. They were talking about his decision to open his own law office as a way to create enough time to pursue his passion for environmental issues.

But Shirkey’s grandfather knew he could do better. “At the end of that conversation he basically said, ‘it’s important to enjoy what you’re doing.’ His last words to me when we ended that call were, ‘do what you love.’”

Two weeks later his grandfather, who had been in good health, died unexpectedly, and those final words lingered in Shirkey’s mind. So when an envelope arrived with a small inheritance, he knew exactly what to do.

He began research on a simple idea: put warning labels on gas pumps to help customers make the connection between the fuel going in their cars and the destruction of the environment. The strategy was similar to putting warning labels on cigarette containers—if you could remind people of the dangers of their addiction, it might help set them free.

As Shirkey argues in the Huffington Post, the stickers would have a psychological impact on the consumers. Through his experience as an assistant city prosecutor he knew the action would be within the legal authority of city hall to mandate. All he would have to do is convince a number of active citizens to join him.

Shirkey quit his practice and started Our Horizon. He hired a graphic designer to create the warning labels and contracted a database company to compile information on councilors in cities across the country that would make it easy for citizens to get their message to the right people.

His passion outstripped his resources. When his inheritance ran out, he dipped into a small investment account, then into his savings.

A wiry presence even over Skype, Shirkey speaks at breakneck pace with a lawyer’s clarity and the energy of a children’s entertainer. He is beyond earnest, believing so deeply in the idea—and the fight against climate change—that he’s willing to spend every last penny he can get his hands on to get the message to consumers.

And there’s precedent for his strategy of reaching out to city halls. One of Shirkey’s favourite stories is that of the town of Hudson, Quebec. In 1991, the town of less than 5,000 enacted the first ever bylaw banning cosmetic pesticides, except under very specific conditions. Two pesticide-producing companies sued the town, but the ban held through challenge after challenge.

“That ban became a template for other municipalities to follow suit, and they did,” Shirkey explains. “Neighbouring communities passed similar laws. Eventually the entire province of Quebec stepped in to create this uniform province-wide regime that banned the use of cosmetic pesticides.”

Today a majority of Canadians live in jurisdictions with either a municipal or provincial bylaw banning cosmetic pesticides, thanks to a city council of just nine people.

“Who will be the next Hudson, Quebec?” Shirkey challenges, echoing a recent column by environmental lawyer Dianne Saxe in Municipal World, a journal that focuses on city employees. 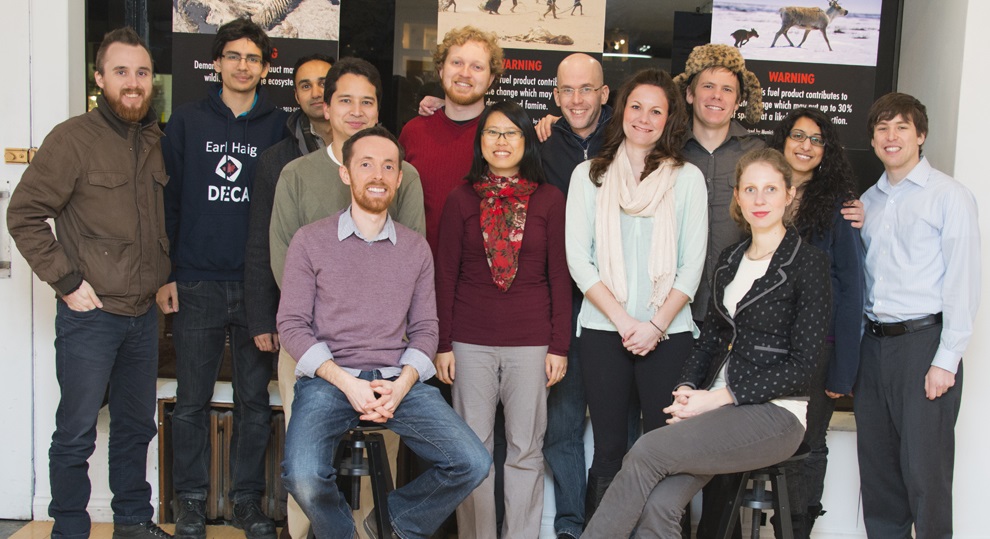 The Our Horizon Team

Late last spring he and Our Horizon's two other team members began telling this story in schools around the Toronto area. He found that youth were already on board when it came to climate change.

“They love having this chance to express their concerns,” he says. “It’s cathartic in a way. I remember being young, learning about this issue and actually feeling sad about it.”

He believes that any debate about the future of our planet must include those who will be most affected by it. Youth can then be powerful allies in the fight for change.

“While our idea intellectually has a lot of strength, if it’s just me in a room saying, here’s why I need to pass this, and here are some legal bits, some economic bits, that’s one thing,” he says. “If after me a 13-year-old takes a mic and then a 16-year-old then a 21-year-old, then a 12-year-old and so on, if you’re going to vote for this bylaw, then you’re going to have to do so after having heard from these kids essentially speak for their futures. And you’re going to have to do it right in their faces. I would not want to be in a councilor’s shoes for that vote.“

Now he’s decided to take that enthusiasm on the road. On September 14, he leaves for a cross-country tour of schools. He’s made appointments with more than 30 elementary schools, high schools, universities and community groups.

The only thing he needs is a little help—that’s where crowd funding comes in. The target of $50,000 is designed to cover the cost of the across country trip and also to fund a paid staff person who will be able to keep in touch with campaigners in each municipality, make sure they have enough resources and help keep them motivated.

Because it’s a flex campaign, all pledges will go to the organization, even if they don’t reach their goal. But even if they can’t make it all the way, Shirkey is determined.

“The trip is happening regardless, but the amount of money we raise can determine the scope and impact of the project,” he says.

With the campaign’s September 14 deadline fast approaching, Our Horizon is reaching out even to the least likely of places, including one young man from Stratford, Ontario who could inspire an army: Justin Bieber.

As a half-joke, Our Horizon has made a habit of tweeting the Biebs once every day or so, trying to get him and his 42 million followers to join the fight against climate change. Part of him believes that behind the strange veneer of celebrity, the 19-year-old superstar might have a conscience that could be recruited.

#FaceTheChange from Our Horizon on Vimeo.

Erika Thorkelson
As a freelance writer, Erika Thorkelson is dedicated to showcasing compelling stories that illuminate our world and how we live. H...