Why Does B.C. Still Kill Grizzlies for Sport?

In early October a provincial government news release landed in the inboxes of reporters and researchers around B.C.

It boasted of a new government-commissioned report that concluded B.C. has “a high level of rigour and adequate safeguards in place to ensure the long-term stability of grizzly populations.”

Even though the report was less glowing than the news release and noted there are monitoring difficulties and a lack of funding, the review gave the BC Liberals the ammunition they needed to conclude the controversial practice of hunting grizzlies for sport is just fine.

But, here’s the thing: even if the province’s estimates of 15,000 grizzly bears in B.C. is correct — and it is a figure disputed by independent biologists, some of whom believe the number is as low as 6,000 — the stand-off over hunting intelligent animals for sport isn’t about the science. It’s about values and ethics.

“The ethical argument is clear. Gratuitous killing for recreation and amusement is unethical and immoral,” says Chris Genovali, executive director of Raincoast Conservation Foundation, one of the organizations fighting to stop the trophy hunt, which takes the lives of about 300 grizzly bears in B.C each year.

“This is a moral issue. This is about ethics and values,” reiterated Val Murray of Justice for B.C. Grizzlies, an organization hoping to make the grizzly hunt an issue in the upcoming provincial election.

“After more than 30 years as a teacher, if a child in the classroom was deliberately hurting animals, he would be immediately referred for counselling before the behaviour escalated into anything else, but people go out and just kill these bears,” she said.

Dramatic pictures of grizzlies fishing for salmon bring tourists from all over the world to “Super, Natural B.C.”

But those tourists rarely see the gut-churning videos of a grizzly being shot, attempting to run for his life and then being shot again — a sequence included in the new film “Trophy” produced by LUSH Fresh Handmade Cosmetics.

Yet, Premier Christy Clark and the BC Liberals show no sign of changing course and, in a parting shot, one of the most energetic supporters of the hunt, retiring Energy and Mines Minister Bill Bennett told Vaughn Palmer on Voice of B.C. that parts of the province have too many grizzly bears and they need to be shot.

It is a view that is increasingly out-of-step with the majority of British Columbians and in direct opposition to the views of Coastal First Nations who have banned trophy hunting in their territory.

Following a trend set by previous polls, an October 2015 Insights West poll found that 91 per cent of British Columbians oppose hunting animals for sport. The margin of error is plus or minus 3.1 per cent.

“Look at who we are as a people and a nation and where we are headed,” environmental activist Vicky Husband urged the Grizzly Bear Foundation board of inquiry in Victoria.

“We are past the time to stop grizzly hunting. It’s not ethically right,” she told the three-person panel headed by philanthropist Michael Audain.

In addition to holding public hearings, the panel is talking to First Nations, scientists, hunters, guide outfitters and conservation organizations and will use the information it garners to set up conservation, research and education programs.

The group, which is looking at the effects of climate change, urbanization, loss of habitat, accidents and food availability as well as the hunt, is writing a report that will be handed to government in February.

Another report headed government’s way this spring is from Auditor General Carol Bellringer, who is looking at whether the province is “meeting its objective of ensuring healthy grizzly bear populations throughout B.C.”

The government claims its decisions are science-based and points to the new scientific review, but the Audain panel was cautioned to take the report with a grain of salt

“This was a government report, commissioned by government, for government. It was not peer-reviewed,” warned professional forester Anthony Britneff.

Government estimates of the number of grizzly bears are based on models, but Melanie Clapham, a post-doctoral fellow at the University of Victoria, who has researched grizzlies for a decade, cautioned that more research is needed.

“Models are only as good as the numbers you put in to them,” she said. 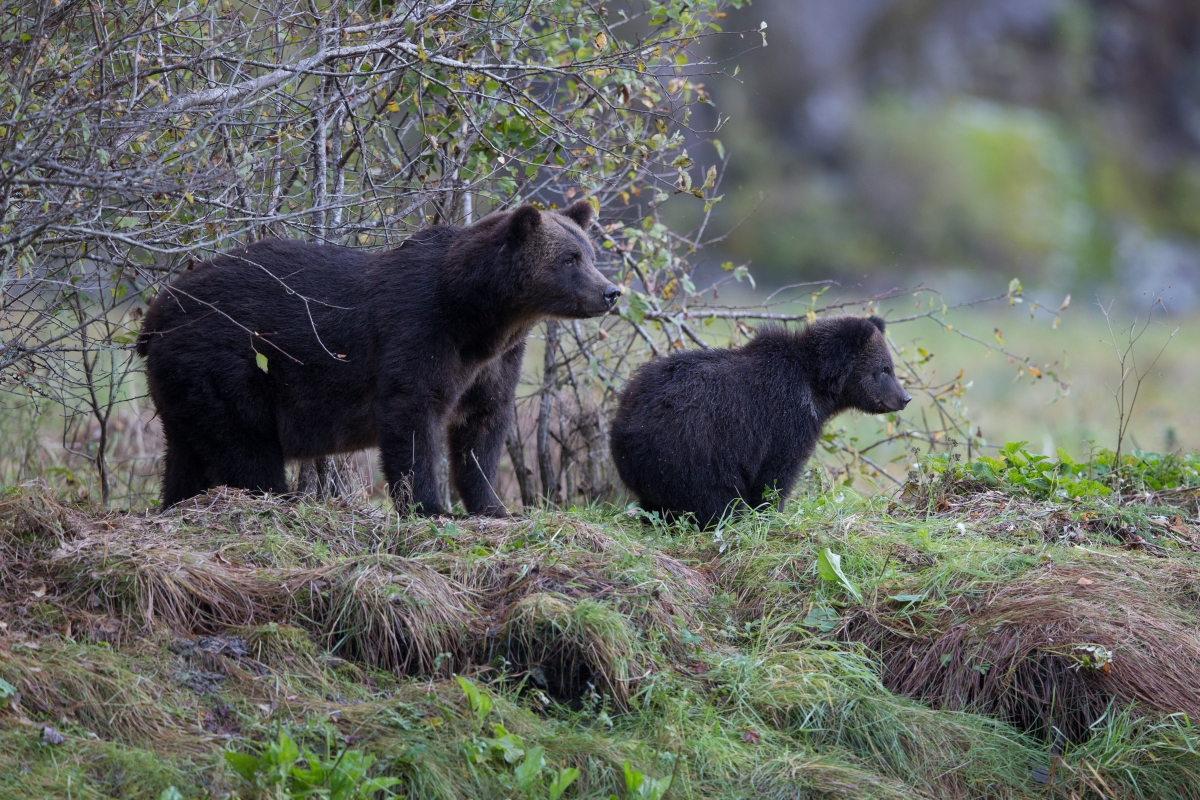 The Liberal government scrapped the NDP’s short-lived moratorium on grizzly hunting after the 2001 election, but the hunt does not have the support of at least one key figure in former premier Gordon Campbell’s government.

“Precious animals and wildlife are being taken for nothing but a trophy. They are not being taken for food or ceremonial purposes, they are simply for people’s self-aggrandizement and whatever twisted, distorted satisfaction they get from killing an animal,” he said in an interview.

A 2012 study by Stanford University in conjunction with the Center for Responsible Travel found that bear viewing groups in the Great Bear Rainforest generated “more than 12 times more in visitor spending than bear hunting.”

But there is increasing concern that the two activities cannot co-exist.

Grizzly bears are a passion for Dean Wyatt, owner of Knight Inlet Lodge, and he takes pride in showing tourists the bears feeding on salmon and berries near his lodge.

But, even though Wyatt wants more British Columbians to understand the vital role grizzlies play in the environment, most of his guests are from overseas because he has found from bitter experience that advertising in B.C. is dangerous for the bears.

“I would love to have more British Columbians, but the ones that come first are the hunters, so we don’t market very much in B.C.,” he told the Audain panel.

“If we put something in the paper, immediately the hunters show up to see if the bears are there. The hunters are there in their boats 24 hours later. It’s horrible,” Wyatt said.

It is a stark example of the conflict between bear viewing and bear hunting, according to Katherine MacRae of the Commercial Bear Viewing Association, an organization that emphasizes that bear viewing must have a neutral impact on the animals.

Even with the no-impact rules, bears quickly learn that humans in a boat are not necessarily threatening and that puts them at risk when hunters show up.

“Our bears that are viewed will be killed because they are not running away . . .  hunting and viewing cannot take place together,” MacRae told the three-person panel.

Expansion of the bear-viewing industry, which brings in $13-million in direct revenue annually, is being constrained by hunting, MacRae said.

“A bear-viewing operator in the Kootenays had his guests witness a kill and then they had to see the dead bear strapped on the roof of the car,” she said.

Most grizzlies hunted in B.C. are killed by foreigners who pay upwards of $16,000 for the chance to display the head and hide, but Jamie Scott of Victoria was faced with a major decision when he was awarded one of the $80 grizzly licences in the government’s lottery-style draw for resident hunters.

“As a hunter, at first I was really excited,” said Scott, but doubts set in as he recalled his father’s hunting ethics.

“You don’t become a better hunter by targeting unnecessary animals. You have to find yourself on the right side of conservation,” said Scott, who gave up his licence in return for a bear-watching honeymoon, with his wife Nicole, at Tweedsmuir Park Lodge.

“We saw 11 grizzlies and it altered my mind on the trophy hunt. I think it’s a black eye for B.C.,” Scott said.

Genovali said that the government’s position is puzzling as the economic argument against the hunt is clear.

“Notably it appears that the revenue generated by fees and licences affiliated with the trophy killing of grizzlies fails to cover the cost of the province’s management of the hunt,” Genovali said.

B.C. taxpayers, most of who oppose the hunt according to poll after poll, are in essence being forced to subsidize the trophy killing of grizzlies,” he said.

At the heart of the ethics argument is the difference between hunting for a trophy and hunting for sustenance. Most hunters do not eat bear meat, especially as it sometimes carries the parasite that causes trichinosis — but three hunters who spoke in Victoria insisted they hunt bears for the meat.

With the provincial election just six months away, so far, only Green Party leader Andrew Weaver has come out against the hunt. The NDP has not yet settled on a position.

Dave Salayka has been a professional forester and tree faller for most of his working life. He’s laid out cutblocks, worked in Alberta’s oilsands and...

Canadian Natural Resources Limited — which has reported an average annual profit of $1.9 billion...

Proposed developments in Canmore, Alta., were set to double the population of the Rockies tourism...

Reports and internal records, which will be released as part of a landmark Treaty Rights...

We’re celebrating our award news with an exclusive, limited-time offer! Sign up as a monthly member of The Narwhal today and we’ll send you one of just 1,000 copies of our 2021 print edition.

Send me a magazine!
Help power our ad-free, non‑profit journalism
Join us