The Vuntut Gwitchin planned to construct a cultural area in the mountains over the next 50 years — but now with rising waters threatening to force people to flee during the coronavirus pandemic, the community is accelerating plans

Warnings of ice jams and flooding on Yukon rivers are prompting one leader to double down on efforts to plan for his community’s future.

Thick ice is “not going to allow for a good, nominal break-up,” he added.

Benoit Turcotte, a hydrologist with Environment Yukon, said ice is up to two metres thick in some areas. If an ice jam forms downriver from Old Crow, it could create a deep reservoir.

Spring freshets are going to get more severe, which is why the First Nation is eyeing the mountains as a haven, Tizya-Tramm said. Work started Monday to clear land to make way for the first of many cultural areas at higher elevations. The areas, comprising wall tents and educational facilities, will be incubators of Gwich’in culture.

The plan was to build these facilities over 50 years. Now, that’s changed to five because climate change is affecting the community quicker than expected, Tizya-Tramm said.

During an April 23 media briefing, Turcotte said the territory received a lot of snow this year and thick ice cover could cause water levels to swell in some areas. As a result, he said, there’s a high probability of ice jam floods in Old Crow and several other communities.

An ice jam could occur at the Bluefish River, a tributary of the Porcupine River, which could affect Old Crow, he added.

“We definitely want gradual melting and as less rain as possible,” he said, adding that flooding could mean more interaction among people during the COVID-19 pandemic.

The Yukon Department of Community Services is developing evacuation plans for Old Crow, Mayo and Rock Creek, among others, in case of flooding. The department was unable to provide more information about the plans.

Tizya-Tramm said flooding and COVID-19 represent a double-headed beast, spurring the community to develop plans of its own.

In the event of an outbreak, the local school would be used as a quarantine area for Elders and those with compromised immune systems, he said. It was selected because it’s above the floodplain.

Earlier this month, Brendan Hanley, the territory’s chief medical officer of health, revealed there was one person with COVID-19 in a rural community. The Yukon government has yet to disclose which community.

On Monday, Tizya-Tramm said the First Nation struck an agreement with Air North to hire planes and evacuate citizens if flooding does happen. The First Nation has a stake in the company. 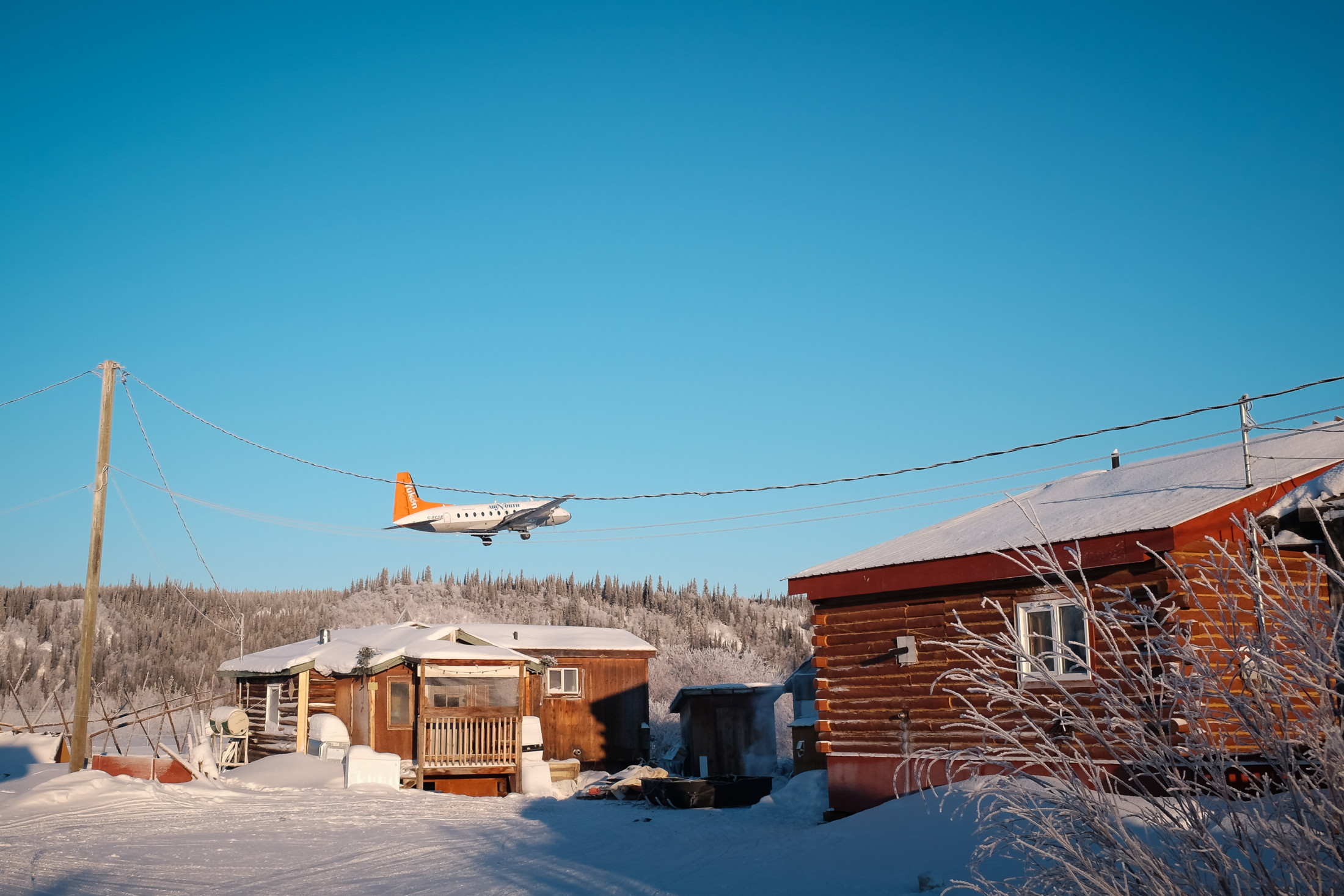 Air North will help evacuate citizens of the Vuntut Gwitchin First Nation in the event of a flood. Photo: Matt Jacques / The Narwhal

“I’m sure we could evacuate the whole community in a day,” said Joe Sparling, the company’s president.

Roughly 260 people live in Old Crow, according to a 2019 report by the Yukon Bureau of Statistics.

Sparling said the company helped the First Nation evacuate its citizens about 20 years ago when a large forest fire swept through the area.

“We flew everybody to Inuvik,” he said.

To keep citizens informed about COVID-19 and possible flooding, the First Nation is setting up a radio station, Tizya-Tramm said. The pandemic has caused communication challenges because people can’t congregate in groups. Using the airwaves will allow for live broadcasts and call-in lines.

Climate change a much bigger threat than coronavirus

Tizya-Tramm said COVID-19 pales in comparison to what will linger long after it goes away — climate change.

He said the community’s location makes it more vulnerable than others. That’s why the community is proactively bracing for long-term impacts, too.

The First Nation declared a climate emergency around this time last year. It urged all levels of governments to respect traditional knowledge and work in lockstep to reduce rising temperatures.

The last time Old Crow experienced a flood was in 1992, he said. People were canoeing between homes then.

The community can’t wait around for this to happen again, said Tizya-Tramm, adding that “freak weather” patterns shouldn’t be used to explain away the underlying problem of climate change.

That’s why the First Nation is setting its sights on higher altitudes.

“This is the direction. We have no choice.”

Banner: The Vuntut Gwitchin First Nation in Old Crow, Yukon, is accelerating plans to establish a cultural area in the mountains due to flood warnings. Photo: Matt Jacques / The Narwhal