Data obtained via a freedom of information request shows taxpayers are footing the bill for delinquent companies’ payments to private landowners, to the tune of nearly $30 million since 2010

The Alberta government failed to recoup more than $8 million in land rents it paid to landowners on behalf of oil and gas companies last year, data obtained by The Narwhal via a freedom of information request reveals.

Industry paid back just $302,000, or less than four per cent of what was owed in 2019 — a continuation of a trend that has seen companies rack up nearly $30 million in rent debt to the government since 2010.

“If companies can’t afford to pay landowners to operate on private land, that’s a flashing red light that something is terribly wrong,” Regan Boychuk of the Alberta Liabilities Disclosure Project told The Narwhal.

“There’s no effort afoot to solve this problem,” he added.

Companies are supposed to pay rent to landowners when they drill a well on their land. If a company doesn’t pay, a landowner can apply to the Government of Alberta’s Surface Rights Board for compensation. The government is then tasked with recouping that money from delinquent oil and gas companies.

But data shows it is seldom successful.

Since 2010, Alberta oil and gas companies have racked up nearly $30 million in debt to the Alberta government in this way.

Data obtained through freedom of information requests shows only $638,000, or just over two per cent, has been recovered over that period. 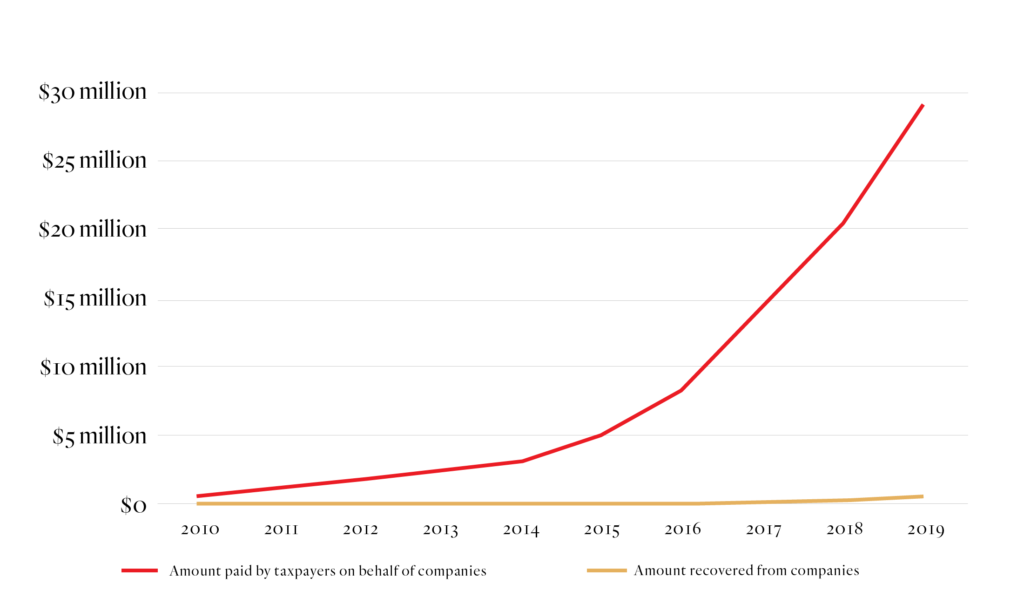 The total amount paid out by government to landowners on behalf of delinquent oil and gas companies has skyrocketed in recent years, increasing 1,183 per cent since 2010. Data: Surface Rights Board / FOIP request with Alberta Environment and Parks. Graph: Carol Linnitt / The Narwhal

Meanwhile, the amount paid out by the government for land rent on behalf of delinquent oil and gas companies has increased 1,183 per cent since 2010.

At the same time, the province’s Orphan Well Association has been loaned more than half a billion dollars in recent years and in April the struggling conventional oil and gas industry in Alberta has been handed $1 billion in grants from the federal government to plug and clean up inactive wells languishing on the landscape, to be administered by the provincial government.

The Government of Alberta is currently accepting applications for the second phase of the $1-billion grant package, with $100 million earmarked specifically for the cleanup of sites owned by companies for which taxpayers have had to pay their land rent. For accepted wells, the government will now also pay for 100 per cent of well plugging and cleanup.

“We have to start asking the question, ‘why can’t they pay basic bills?’ ” Boychuk said. “And that leads to some uncomfortable answers about the future of the industry.” 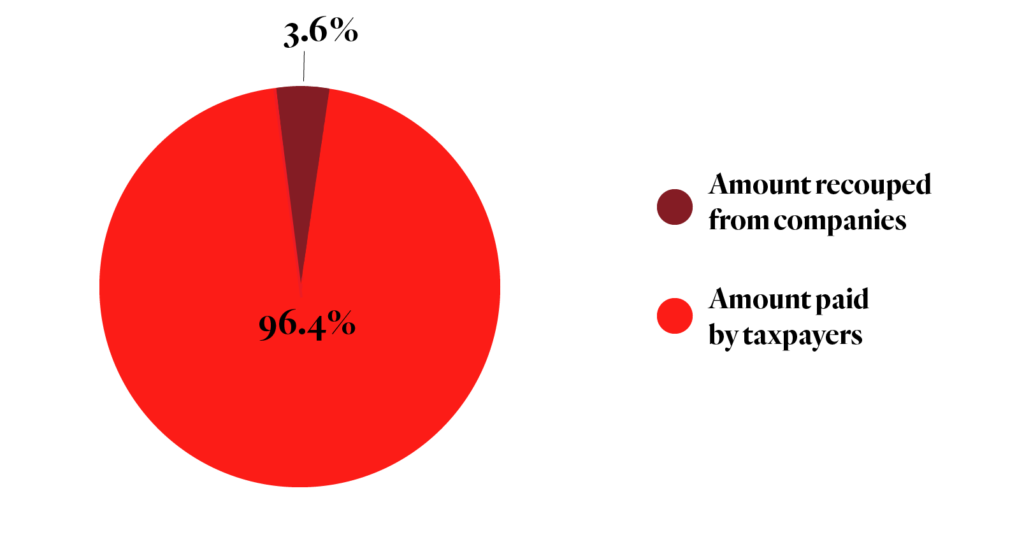 In 2019, less than four per cent of the more than $8.4 million paid out by government on behalf of delinquent oil and gas companies was recouped, leaving taxpayers to cover the rest of the bill. Data: Surface Rights Board / FOIP request with Alberta Environment and Parks. Graph: Carol Linnitt / The Narwhal

There are more than 336,000 oil and gas wells across Alberta, according to the provincial government. Many of them are on private land.

If a company fails to pay the annual rent they have agreed on, the landowner can apply for a “recovery of rentals” from the Surface Rights Board, as per the Surface Rights Act, and receive their compensation from Alberta’s general revenue fund. That’s taxpayer money.

The Narwhal reported last year that the tab for taxpayer money paying land rent on behalf of oil and gas companies was already $20 million. It’s now grown by close to $10 million, according to data provided to The Narwhal by the Surface Rights Board.

This is supposed to be a temporary fix, as the government is then meant to recoup taxpayers’ money by tracking down the company and collecting the funds.

When an application is addressed, the board will try to contact the company and order them to pay. If that doesn’t work, the board directs the Minister of Environment and Parks to pay the landowner out of the government’s general revenue. (Alberta Environment and Parks and the Surface Rights Board did not reply to requests for an interview by publication time.)

To Daryl Bennett, a farmer and director with the landowner group Action Surface Rights, who has spent years trying to help landowners get the payments they’re owed, the government’s efforts are seldom enough.

“In the past, there’ve been cases where they just didn’t try,” he said. In those cases, barring a company from the site will have little effect, as the well is likely inactive anyway.

Bennett said he believes companies have learned that skipping out on land rent can be a way to cut their costs.

“It’s just the way the system is — the way the law is. If companies don’t pay, the government is supposed to step in,” Bennett told The Narwhal. “A lot of companies have learned to game the system and take advantage of it.”

“It’s the business. When times are good, it’s good,” he said. “When it’s not, then they easily socialize the losses.”

“They’re just abusing the system to cut payments to landowners and kick the can down the road for years,” Bennett said. 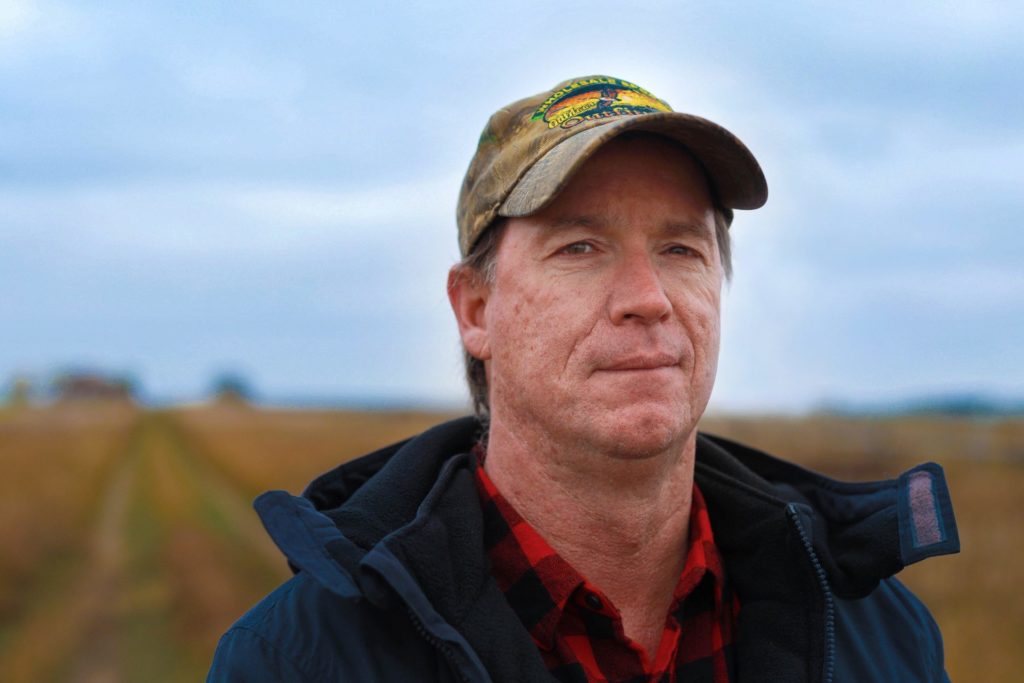 Companies ‘just don’t have the money’

Boychuk points to a number of other bills many oil and gas companies have been struggling to pay in recent years, from municipal taxes to levies owed to the Alberta Energy Regulator.

“A lot of those companies just don’t have the money,” Bennett said, noting that this was a problem prior to the COVID-19 pandemic, too.

“Even before the pandemic, a bunch of them were hoping that the oil price would rise enough that they could sell their stuff to somebody and get their money out of it. They were already underwater,” he said.

Then the pandemic hit, flattening demand at the same time a global supply glut pushed benchmark prices into negative numbers.

Jay Averill, media relations manager for the Canadian Association of Petroleum Producers, told The Narwhal that current events have forced many oil and gas companies into financial hardship.

“Since the middle of March over $8.6 billion in capital expenditure cuts have been announced in the Canadian upstream oil and gas sector,” Averill said in an emailed statement. “This is in response to the low commodity prices resulting from the global economic slowdown caused by the COVID-19 pandemic along with the oil price war between Saudi Arabia and Russia.”

Others, like Boychuk, point to a longer-term trend of reduced profitability in the oilpatch, noting it’s not just the pandemic that has pushed companies into the red. Either way, unpaid bills have been increasingly falling on taxpayers, often the same people most affected by the volatility of the industry.

“It’s a catch-22 situation,” Bennett said. “If you force [companies] to pay, they go bankrupt. Then they don’t pay anything and you lose all the jobs and everything else.”