“It is a sign the project is in danger,” Patrick Bonin, a Greenpeace Canada climate and energy campaigner based in Montreal, told DeSmog Canada. “Over 70 per cent of Quebecers don’t want Energy East to be built.”

Ontario and Quebec announced last month that Energy East would have to meet seven conditions to gain the provinces' approval of the 4,600-kilometer pipeline from Alberta to New Brunswick. Included in these conditions is a demand for a full environmental assessment of the greenhouse gas emissions associated with the pipeline.

An analysis conducted earlier this year by the Pembina Institute, an energy think tank, found the greenhouse gas emissions from extracting the oilsands bitumen to fill the Energy East pipeline would erase all reductions in greenhouse gas emissions achieved by Ontario’s phase out of coal-fired power plants. The analysis did not include emissions from combustion, which would make Energy East’s carbon footprint even higher. 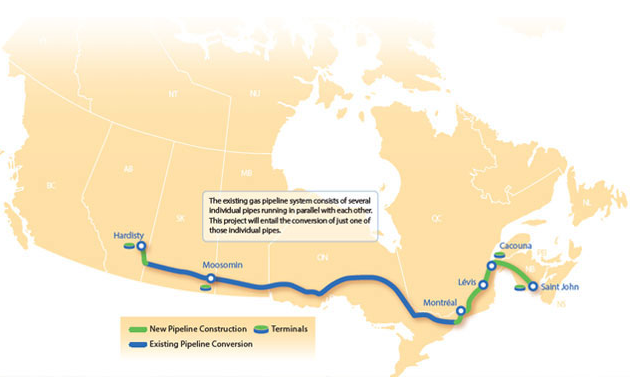 This is not the first time an Alberta premier has travelled to another province on behalf of a pipeline project. British Columbia Premier Christy Clark famously inflamed relations with Alberta with her five conditions for the Northern Gateway pipeline, which resulted in some icy meetings with then Alberta premier Alison Redford.

Clark's demand to receive a greater share of the fiscal benefits from Northern Gateway was a contentious issue between the two western provinces, but she did not go as far as Wynne and Couillard in insisting the pipeline's greenhouse gas emissions be properly assessed.

The National Energy Board's reviews of pipeline projects aren't taking climate change into account, which has left a leadership vacuum that the provinces are stepping in to fill. New pipelines facilitate expansion of oilsands production, leading to higher greenhouse gas emissions. 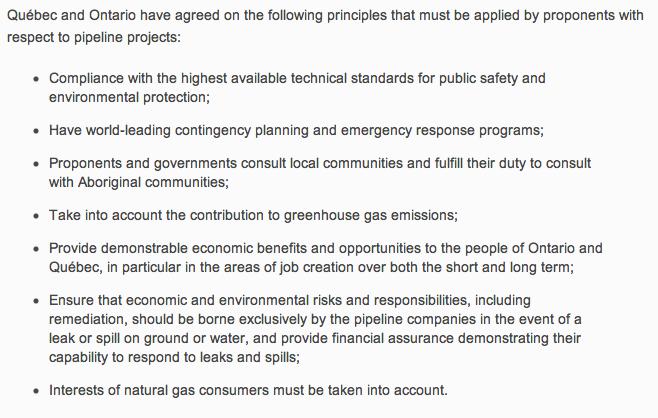 The seven conditions on the Government of Ontario's website.

Documents leaked to Greenpeace last month revealed TransCanada had hired global PR firm Edelman to work on an aggressive strategy of undermining Energy East opponents through tactics that included creating phony grassroots groups to give the impression of genuine support of the pipeline. The revelations caused TransCanada and Edelman to publicly part ways.

Gabriel Nadeau-Dubois, former Maple Spring student activist and author, announced on Radio-Canada just days after the leak that he was donating his $25,000 Governor General’s Literary Award to an anti-pipeline coalition and encouraged the public to do match it. Donations have reached $400,000 now. 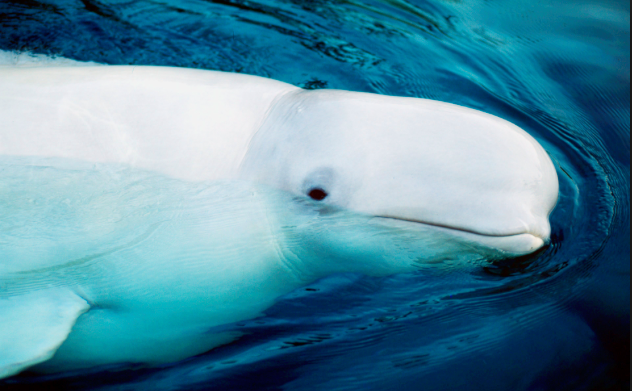 Yesterday the Committee on the Status of Wildlife in Canada announced the belugas whales of the St. Lawrence Estuary — where TransCanada has plans for an Energy East marine oil tanker terminal — are at greater risk of extinction than a decade ago, forcing TransCanada to halt work on the terminal.

“It’s good news and bad news,” Bonin says. “TransCanada’s marine terminal at Cacouna probably won’t be built now, but it is sad to find out the beluga population is not recovering."