In late June the B.C. government released an information bulletin detailing environmental fines and administrative penalties issued in the last quarter of 2017.

Leading the pack was repeat offender Teck Resources, which was hit with $78,100 in fines for three administrative penalties “for failure to comply with an effluent-discharge permit” for its Line Creek coal mine operation in the Elk Valley,” the bulletin states.

However, internal e-mails from within the ministry of environment, released via Freedom of Information legislation, show fees were initially tallied at $90,400 before Teck successfully lobbied for a fee reduction.

“The preliminary penalty amount of $90,400 has been reduced to $78,100 upon my receipt and consideration of Teck’s written response,” reads an October 30, 2017 e-mail from Gwenda Laughland, director of compliance policy and planning at the ministry of environment.

“This penalty is for non-compliances that occurred at various times over a two-year period from 2014 to 2016.”

The penalties related to inadequate wash bays at the company’s Line Creek operations, which resulted in oil being discharged into a pond. The resulting fees were in response to Teck’s failure to maintain works, five exceedances of permit conditions and six non-compliance reporting contraventions, the e-mail from Laughland details.

“These small potatoes fines are almost a feel-good that allows the province to ignore much more significant violations in the Elk Valley,” Lars Sander-Green, with the conservation group Wildsight, told The Narwhal.

Sander-Green said the province’s fines for improper wash bays are “pocket change to Teck” and obscure the ongoing problem of the company’s legacy selenium pollution.

“I think fines are one thing that can help in some cases,” he said, “but I think in this case we have to ask why the province keeps issuing permits to expand Teck’s mining operations, allowing the company to dump more pollution into the water when they’re so far from a long-term water treatment solution and don’t have plans they can prove can work.”

The Narwhal asked the B.C. ministry of environment if it is standard practice for the province to reduce fees associated with penalties at a company’s request.

The ministry must adhere to strict legal requirements, the environment ministry said, adding the company was given the opportunity to review and respond to a preliminary penalty assessment.

The final fee decision is left to an independent statutory decision maker, the ministry said.

In an e-mailed statement to The Narwhal, Teck said the company provided B.C. with “information not previously considered by the Ministry of the Environment in the penalty assessment. This included information on steps being taken to address the issue and prevent reoccurrence.”

Water from wash bays is now vacuumed and transported off-site for treatment, the statement said, adding Teck has since introduced new monitoring “ to improve our detection and reporting” of permit violations.

Teck’s Line Creek Operation has been the subject of increasing scrutiny after a water treatment plant designed to curtail the mine’s discharge of selenium into the Elk and Fording Rivers failed, resulting in the treatment plant being taken offline.

Teck built the $600 million Line Creek water treatment plant in 2014 to address selenium pollution but the facility resulted in the release of a more dangerous form of selenium into the watershed. The facility caused a substantial fish kill and in 2017 the company was ordered to pay a $1.4 million fine after pleading guilty to violations of the federal Fisheries Act.

Selenium pollution can cause birth defects and reproductive loss in wildlife. An export report prepared for the federal government in 2014 warned a lack of action to address selenium pollution could lead to a total population collapse of cutthroat trout in the Elk Valley.

For several years Teck has sought a solution to the release of selenium pollution and has discussed plans for additional water treatment plants with the province, as part of the Elk Valley Water Quality Plan, but has so far been unable to stem and treat the flow of the pollutant, which leaches from massive amounts of waste rock at the mines. 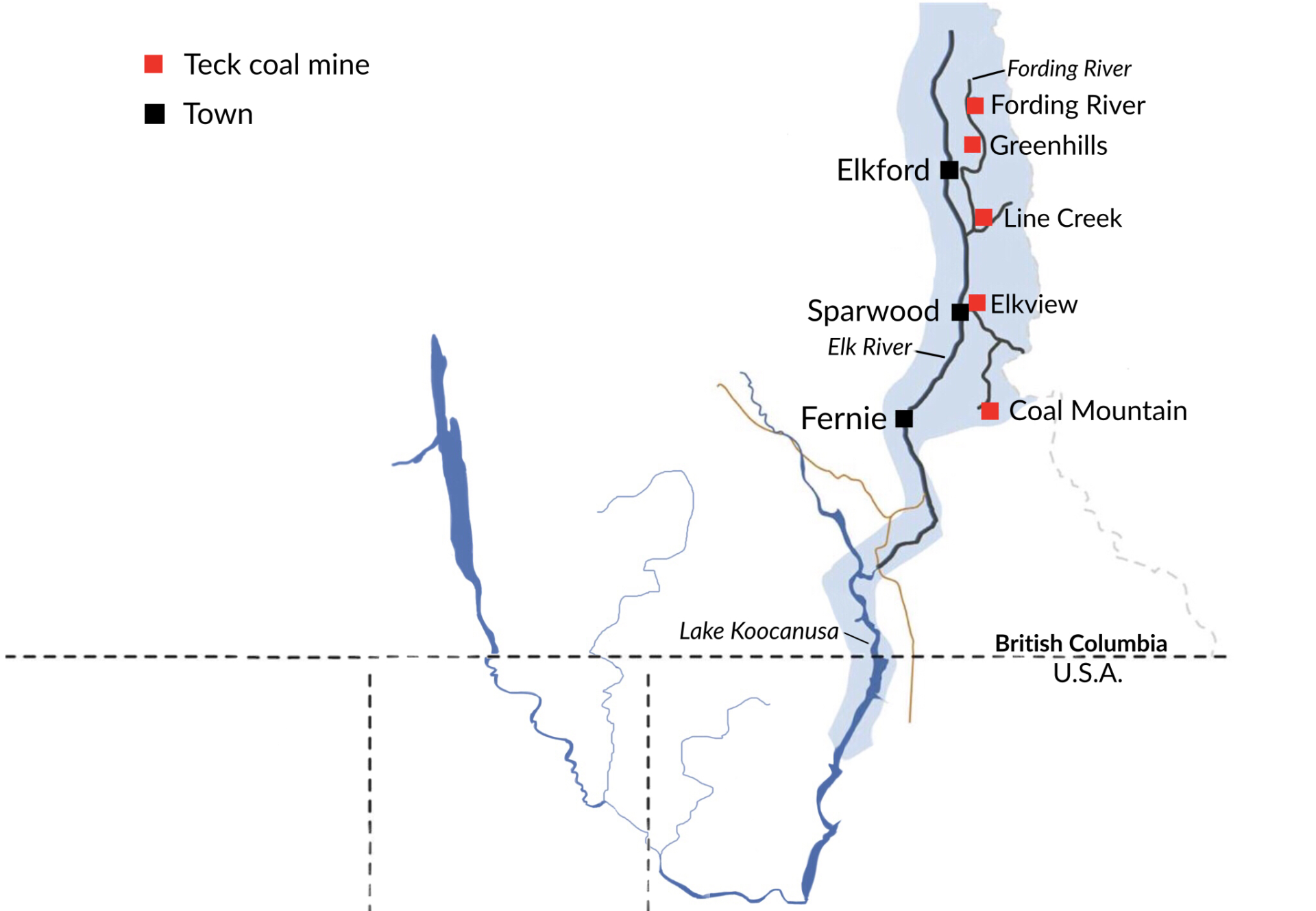 The Elk River flows across the B.C.-Montana border, draining into Lake Koocanusa and the Kootenai River.

“In addition to the short-term impacts, it is well understood that high concentrations of selenium will have long lasting impacts on water quality, fish, other aquatic species, wildlife and human health in southeast B.C. and northwestern Montana communities,” the letter from Lana Pollock, chair of the commission’s U.S. section, and commissioner Rich Moy, warned.

“These impacts could become permanent,” the commissioners said, further stating their concern that no meaningful solution to the selenium problem has been identified or implemented by Teck.

Growing concerns over selenium pollution have some wondering why the province continued to issue mine expansion permits before the water quality issue was more adequately addressed. Four mine extension permits were granted to Teck in 2014.

There are currently three applications for new coal mines in the Elk Valley in the initial stages of review with the B.C. government.

The most advanced project, the Bingay coal mine, proposed by Centermount Coal, would produce 1 million tonnes of coal per year over 13 years. The project is located in the centre of the Elk Valley, 21 kilometres north of Elkford and has been the subject of significant local opposition, including from the Elkford municipal council. The Bingay proposal has completed the pre-application part of the provincial environmental assessment process, and is in the early stages of a federal environmental review.

“Companies should have to prove they can mine in a sustainable manner, and then the province can issue permits,” Sanders-Green said.

“Don’t keep mining with hope and a prayer you can sort it out later.”

20171026 Teck Resources Penalty FOI by The Narwhal on Scribd

Banner: A bulldozer moves coal for transport by train. Photo: Arthur Meyerson / Aurora Photos
We hear it time and time again:
“These are the stories that need to be told and you are some of the only ones telling them,” John, a new member of The Narwhal, wrote in to say.

On braving the wilderness and embracing discomfort

Exposing alleged wrongdoing in the environmental movement could help save the planet, not hinder the...