Liquefied Natural Gas (LNG) development in British Columbia could produce 73 million tonnes of carbon pollution per year by 2020, according to the Pembina Institute. This would bring the carbon footprint of LNG development in B.C. to three-quarters as much as that of the oilsands, currently Canada's fastest growing source of climate pollution.

Alison Bailie of the Pembina Institute writes in The Tyee, that the estimate is at the "lower end" of the development scenario required to realize the B.C. government's hopes for annual revenue from LNG exceeding $4 billion. The province would need to produce four to six trillion cubic feet of shale gas per year by 2020 to reach that number.

The scale of that kind of natural gas production would require five to seven LNG facilities and over 10,000 wells with an accompanying network of roads, pipelines, compressors and gas processing plants.

Pembina's estimate for the industry's carbon pollution refers just to LNG production in B.C. This includes pollution from extraction and processing of the gas from shale gas fields, transportation of the gas to LNG facilities on the coast, and liquefaction and storage of the LNG until it is loaded onto carriers (tankers). 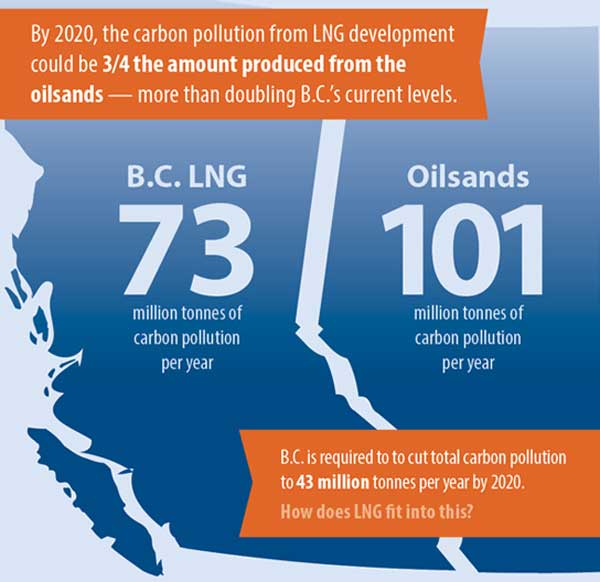 If B.C. sticks to its plans for LNG and ends up producing 73 million tonnes of carbon pollution from a single industry, there's little doubt that the province will miss its reduction target. Bailie notes that even Minister of Energy and Mines Rich Coleman, responsible for the province's natural gas development, admitted on CBC's Early Edition that "meeting our [reduction] goals will be a challenge" in the face of LNG development plans.

The B.C. government could, like other governments, choose to simply ignore or alter the reduction targets, or add special accounting for LNG. But with evidence of of the real-world impacts of missing reduction targets building up, including declining fisheries, flooded coastal communities and increasingly vulnerable forests in B.C., ignoring the target seems particularly unwise.

Provincial MLAs will be debating rules for carbon pollution and taxes for LNG development in the upcoming legislative session this month.

As Bailie points out, when it comes to LNG development, there are still options the province could take that wouldn't involve abandoning its climate commitments.

For example, the government could prioritize creating jobs in lower-carbon sectors like clean, renewable energy — a sector that is growing globally. This would reduce the need to expand LNG production for economic growth, and "less LNG development means lower carbon pollution with jobs and GDP growth elsewhere," writes Bailie.

Restricting LNG projects so as to make a smaller carbon footprint, instead of making as many plants as possible, would also significantly reduce the projected carbon pollution levels.

The BC government would also be better equipped to make choices on how to balance LNG projects with climate concerns if it undertook a strategic environmental assessment on LNG development, instead of separate assessments for each proposed project.

Following the success of the provincial carbon tax and establishing an LNG tax could encourage the industry to minimize its carbon pollution. Standards and taxes set by the government could also encourage innovative technology to aid renewable energy goals, such as capturing and storing carbon pollution at shale gas processing plants, writes Bailie.

If LNG development proceeds according to the B.C. government's current plans, it could create a climate challenge on par with the oilsands. But the government still has the option to limit the growth of the natural gas sector and control its carbon emissions, while prioritizing low-carbon job creation in the clean energy sector.

"The implications for our climate must be an important part of those decisions," writes Bailie, because "British Columbians will live with the consequences — whether positive or negative — in the decades to come."