Canada's carbon emissions in 2020 will be 20% higher than Harper government's promised reductions under the 2009 Copenhagen Accord. More importantly, Canada's emissions will be 66% to 107% higher than what's actually required to do its share in meeting the 2C global warming target a new Environment Canada report revealed.

That is "significant progress" the report says without irony.

"The only real action on climate is increased PR by the Harper government," said John Bennett of the Sierra Club of Canada.

"While the rest of the world is trying to solve the climate crisis, this government is only interested in protecting the interests of the fossil fuel industry," Bennett told DeSmog Canada.

Survey after survey shows that Canadians overwhelmingly want action on climate but are misled by the government's propaganda that something is being done he said. 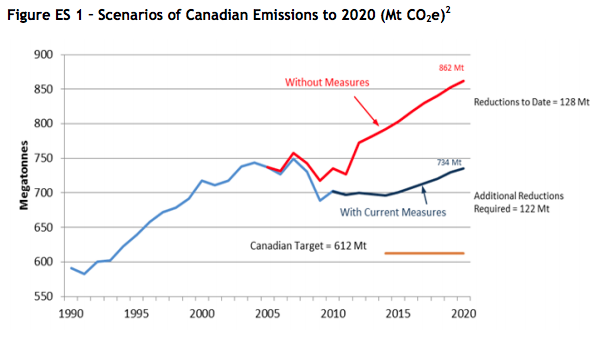 The official Environment Canada emissions report shows the country's 1990 emissions were about 590 million tons. (Caveat: Canada has likely been under reporting its emissions according to an international investigation.) 1990 is the scientific and United Nations baseline year against which emission reductions are measured. Under the Kyoto Protocol, Canada agreed to reduce its emissions by 6% to 554 million tons (Mt) by 2012.

In 2011 Canada became the first country in the world to renege on an international climate treaty.

Growth of the tar sands and natural gas sectors, almost all for export, will push Canada's emissions to 734 Mt in 2020. That number should be a lot higher if not for major reductions by cities and provinces, including Ontario closing all of its coal-fired power plants by 2014.

Scientists estimate that developed countries need to reduce their net carbon emissions by 25 to 40% by 2020 to have a good chance of keeping global warming to no more than 2C. No one considers 2C a safe level of warming.

"Climate Change is a global problem that requires a global solution. Canada, like the European Union, takes its commitments seriously and is doing its part," said Peter Kent, Environment Minister in a March 20, 2013 speech.

Canada's obvious duplicity on the climate file is widely known at international levels. Will Canadians continue to allow government ministers to say '1+1 = 5?'

Stephen Leahy is the 2012 co-winner of the Prince Albert/United Nations Global Prize for Climate Change reporting . A Canadian,…

The B.C. forests ministry has approved new clearcut logging in habitat for highly endangered northern spotted owls, including in the Fraser Canyon, where biologists sighted...

B.C. finally has rules to enforce clean up of oil and gas wells. But will they be enough to protect taxpayers?

Energy minister Bruce Ralston is confident his government’s new timelines and penalties will address the...

‘This is about vulnerability’: Ingrid Waldron on the links between environmental racism and police brutality

As North America is gripped by growing demonstrations against police brutality, The Narwhal speaks with...