Ottawa has big ambitions but little research when it comes to setting aside the most valuable areas for conservation. Never fear, the mapping scientists are here

By Brian Owens
Share
Conservation scientist Aerin Jacob is part of a team that mapped Canada's ecosystem hotspots that should be prioritized for protections. Photo: Tristan Brand

In 2017 conservation scientist Aerin Jacob was invited to join an expert team charged with advising the Canadian government on ways to meet its conservation targets. The team was asked to identify areas that provide important ecosystem services — such as landscape-based carbon storage, flood prevention, fresh water and food resources and outdoor recreation — so they could be taken into account when deciding where to put new protected areas.

But there was just one problem: that information didn’t exist.

“We were astonished to find that Canada has no maps of ecosystem services at national levels,” says Jacob, who works with the Yellowstone to Yukon Initiative in Canmore, Alta. “As scientists who care about environmental decisions, we don’t think the government should be guessing.”

So Jacob and several other members of the expert team decided to create those maps themselves. They chose to focus on three ecosystem services in particular: carbon storage for climate regulation, fresh water and nature-based recreation — selected because they are some of the key benefits that people get from nature, but also because there is robust, national, publicly available data available for those services.

The scientists mapped carbon storage using data on forests and soil across the country, and water with hydrological databases. Recreation was mapped using data from existing surveys that have identified the kinds of places people like to visit — areas featuring forests, mountains and, especially, water.

The team also took the map one step further. They didn’t just identify areas where nature has the capacity to provide these services, but looked for the places where the demand for and ability to access these services by people was highest and where nature was able to meet that demand. 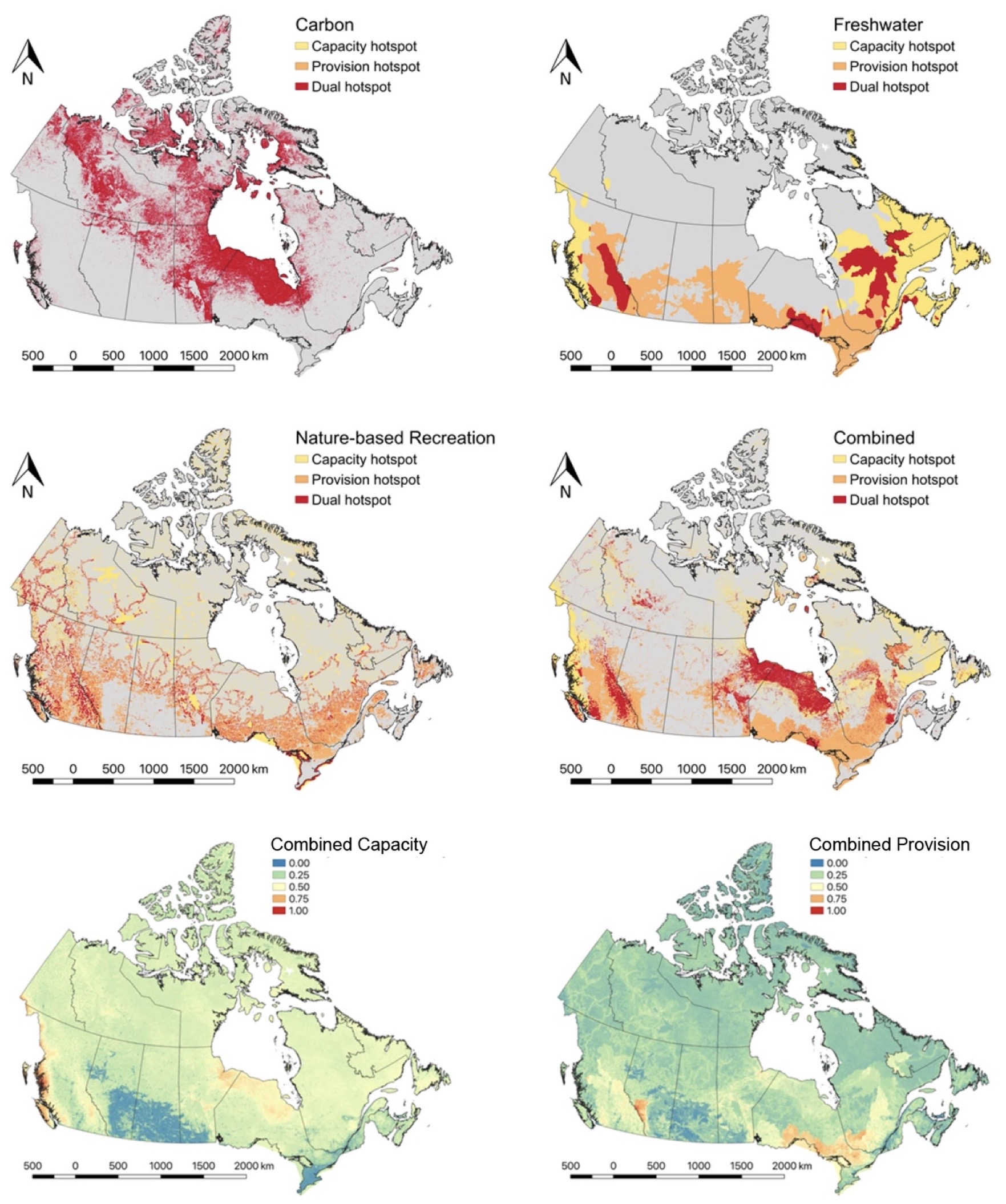 The new maps published Tuesday in the journal Environmental Research Letters identify ecosystem hotspots that should be prioritized for protection, including the Hudson Bay lowlands and other boreal shield, taiga and Arctic ecosystems for carbon; north central Quebec, Lake Superior and the eastern mountain ranges of B.C. for freshwater; and the lower Great Lakes, central lakes of Manitoba and the B.C.-Alberta border for wilderness recreation.

They also highlighted the places that store the most carbon, the watersheds that provide the most water to the largest number of people, and wild natural places that the most people can access and enjoy for recreation.

“Our existing protected area network focuses more on capacity, and doesn’t capture as well the places that are actually providing benefits,” says Matthew Mitchell, a research associate studying ecosystem services at the University of British Columbia who led the work on the map project.

“With water, for example, you can have a lot of it but if there is no one downstream then they’re not getting that benefit.”

Similarly, for a natural area to be useful for recreation it needs to be reasonably close to where people live, and accessible by road. “Places with greater demand, and access, might be more important to protect than others,” says Mitchell.

This new mapping project could help shift that balance, says Tim Patterson, a member of the Nłeʔkepmxc Nation and a hiking guide in Calgary who was involved in the creation of Castle Provincial Park in southwestern Alberta.

“The thing that frustrates planning for both natural resources and conservation is fragmented information,” he says. “There are lots of people doing good work, but they’re from diverse fields, and we don’t always have all of the information that is out there.” 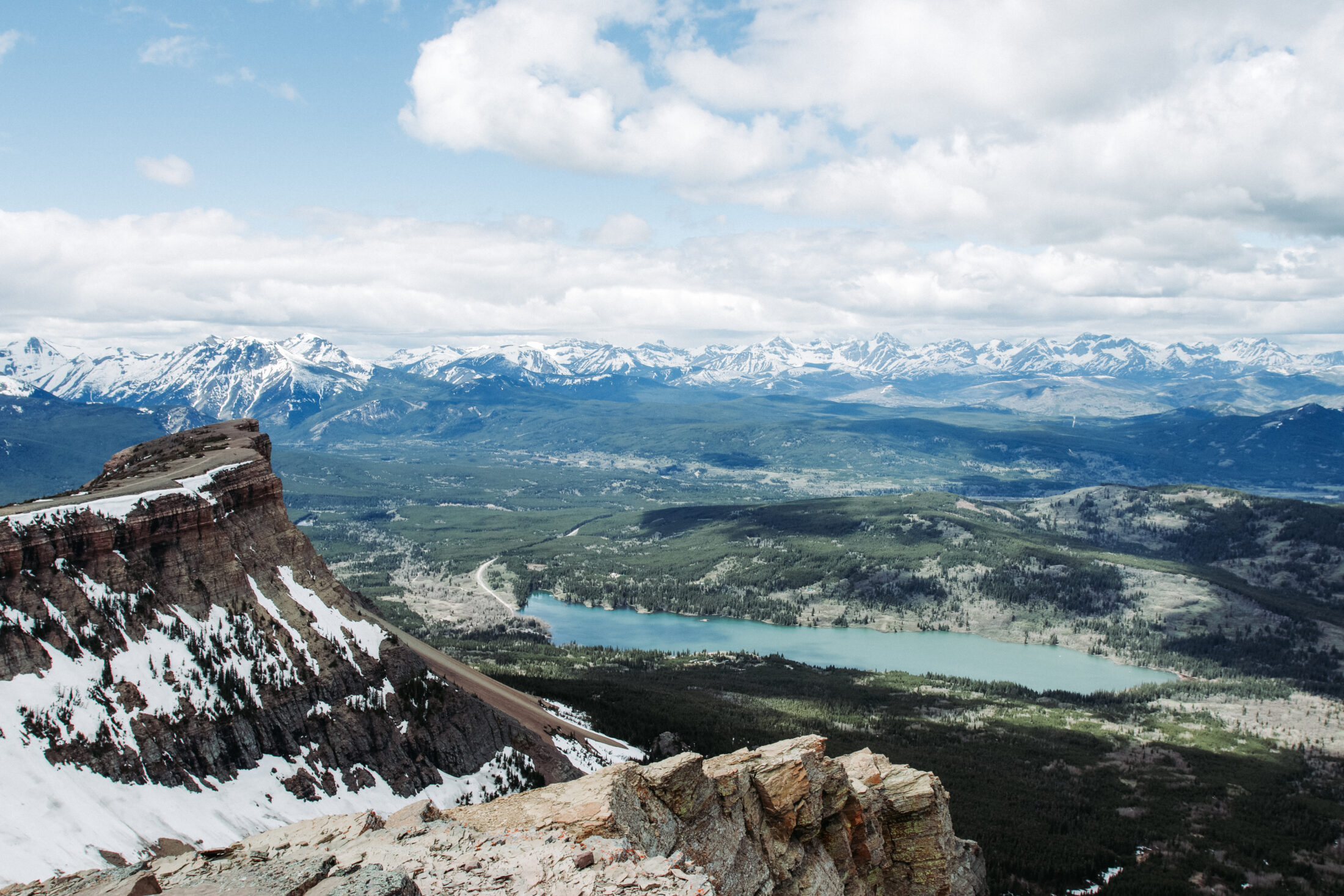 The latest figures show that as of December 2019, just over 12 per cent had been protected (the COVID-19 pandemic has delayed the publication of updated numbers). But Grant Hogg, executive director of conservation partnerships at Environment and Climate Change Canada, told The Narwhal in November the government was on track to meet the 17 per cent goal by the end of 2020.

There are around 80 different types of protected areas that can contribute to those targets, ranging from a national park to a sustainably managed ranch. Choosing a type depends on factors such as the conservation objective, the social, economic and cultural interests of the area, the cost and the desire of local communities, Hogg says. They are selected based on criteria like size, connectivity and ecological integrity, as well as their ability to protect ecosystem services and preserve biodiversity. Better information about where the most important ecosystem services are can help conservation managers choose the best places to protect.

“All of us interested in protected and conservation areas want to ensure that they provide measurable benefits,” Hogg says. “This kind of map could help in that conversation.”

Having a good understanding of the ecosystem services provided by a protected area can also help generate funding to support its long-term management, Hogg says. Darkwoods conservation area and the Great Bear Rainforest in British Columbia generate income from their carbon stores on the carbon market, he says.

The map has identified several areas that are important hotspots for ecosystem services that are not currently protected. The eastern slopes of the Rocky Mountains in Alberta, for example, are one of the most important places in the entire country for fresh water, providing water to people across the Prairies from Alberta to Manitoba, while also being a major hotspot for nature-based recreation. The Alberta government recently rescinded a decades-old policy that opened up more than one million hectares of the eastern slopes to mountaintop-removal mining for coal. 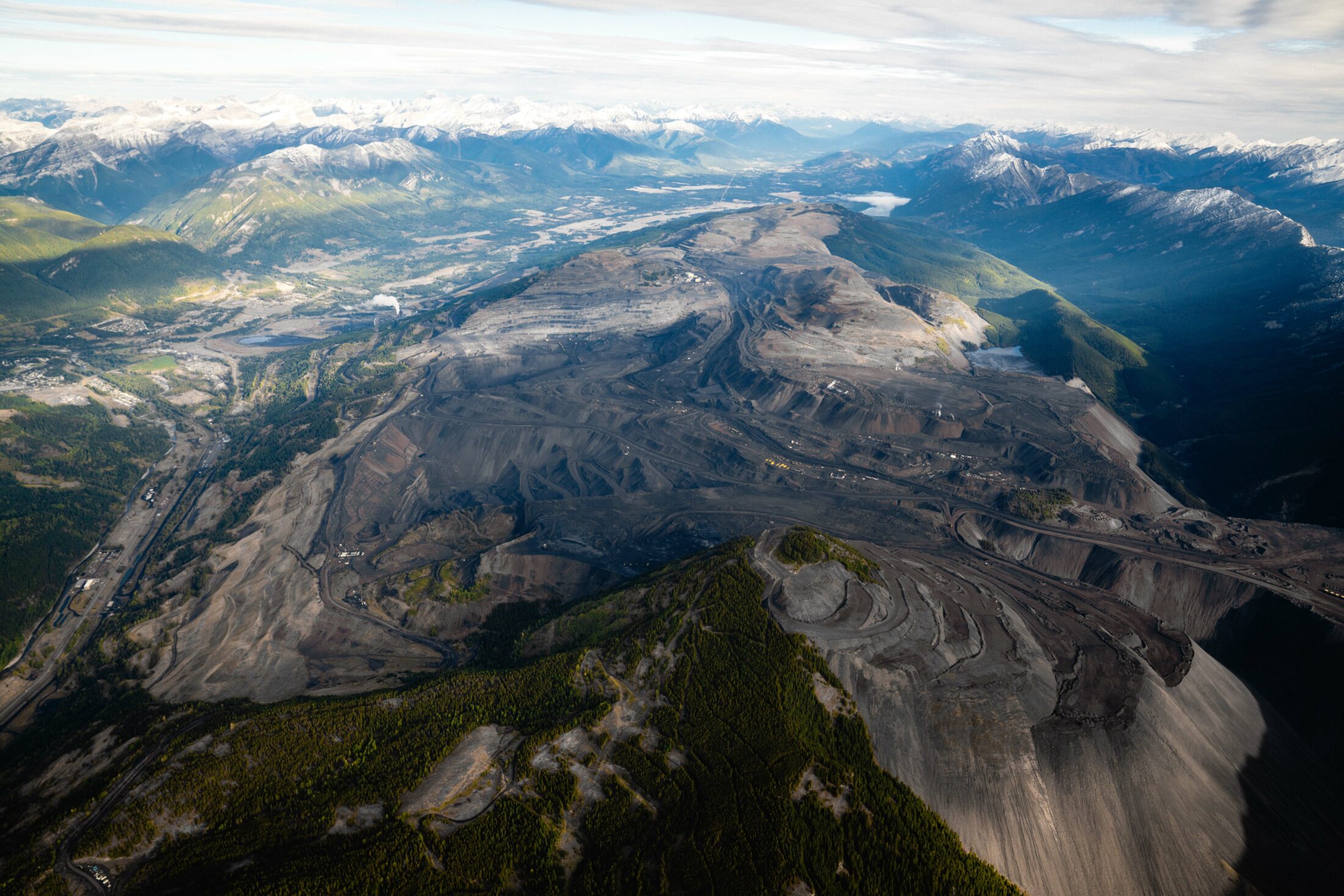 The Alberta government recently opened up the eastern slopes of the Rocky Mountains to mountaintop-removal mining, pictured here in B.C.’s Elk Valley near the B.C.-Alberta border. Photo: Callum Gunn

Alison Woodley, senior strategic advisor at the Canadian Parks and Wilderness Society, says efforts to protect the headwaters of the North Saskatchewan River in that area, including the longstanding campaign to have the Bighorn Country region designated as a wildland provincial park, could get a boost from having access to solid information about the benefits the area provides.

“If we’re going to achieve the goal of conserving biodiversity and the benefits it supplies to people, then we need to guide our planning for those areas through science and Indigenous knowledge,” she says.

Other important hotspots identified include the north shore of Lake Superior for fresh water and recreation, an area that Jacob says is not currently on anyone’s radar for conservation in Canada or internationally, and the massive carbon storage hotspot of the Hudson Bay lowlands, which outstrips all other carbon sinks in Canada and is at risk from road building and proposed mining projects. A group of Indigenous Peoples is working to protect an undeveloped part of this area in northern Manitoba by preserving the Seal River watershed as an Indigenous Protected Area.

Jacob says while the map highlights how many ecosystem services hotspots overlap with planned or existing resource development, she stresses that many human activities may be compatible with greater protections.

“Natural resources extraction is not incompatible, but this map should give us pause about how and where we do it,” she says. “Especially in the hotspots we want to tread very carefully.”

Banner: Conservation scientist Aerin Jacob is part of a team that mapped Canada's ecosystem hotspots that should be prioritized for protections. Photo: Tristan Brand

Brian Owens
Brian Owens is an award-winning freelance journalist based in St. Stephen, New Brunswick. He writes on scientific and environmenta...

Governments are investing billions into carbon capture in the Prairies. Here’s what you need to know

As carbon capture, utilization and storage becomes more prevalent, some advocates question whether it amounts...