Charities and Self-Censorship: Is Canada Going the Way of the UK’s Crumbling Charitable Sector?

Prior to the release of the Canada Revenue Agency’s 2003 guidelines on charities and political activities, individuals from Canada’s voluntary sector expressed the belief that Canada’s policy should look a lot more like England’s.

The rule that says Canadian charities must limit political activities to 10 percent of their time and resources should be scrapped, they said, and a Canadian charitable commission, similar to that which exists in the UK, should be set-up to regulate the sector.

Charitable organizations in England have historically enjoyed both government support and the legal right to speak out, and the Third Sector (voluntary sector) has a track record of making social change. The past decade, though, has been one of massive change for law and policy on charity in England. In some respects, Canada does seem to be taking some cues from England when it comes to the voluntary sector, but probably not in the way those who asked for it back in 2003 had hoped.

As Australian legal scholars Kerry O’Halloran and Myles McGregor-Lowndes have written, philanthropic activism was a fact of life in Victorian England.

[view:in_this_series=block_1]
The children’s charity, Dr. Barnardo’s, which remains in operation today, led protests against the conditions of young children forced to work as chimney sweeps. An organization known as the Infant Life Protection Society provided services for babies born into workhouses, while simultaneously campaigning for an act forcing people taking in infants for more than 24 hours to report them, and report deaths of such infants within 24 hours. This didn’t change until the 1917 case, Bowman v. Secular Society, when it was deemed that: A trust for the attainment of political objects has always been held invalid… the law has no way of judging whether a proposed change in the law will or will not be for the public benefit…

In the UK, this decision translated into the policy that charities can undertake campaigning activities and political actions aimed at securing, opposing, or changing the law or policy or decisions by government so long as the purpose of those activities further the charitable purpose for which the organization exists. So, when, in 2012, the organization Save the Children called on the British government to stick to its targets on child poverty as part of a campaign to help children in the UK, the organization was well within its established charitable rights. Save The Children was attacked by Conservative MPS and the right-wing press, and so was the right of charities to engage in political campaigning.

The Institute for Economic Affairs (IEA) published a paper called Sock Puppets: How the Government Lobbies Itself and Why. The author, Christopher Snowdon, said that the changed relationship between the Third Sector and government amounted to a Labour Party strategy that ensured the left would maintain political power even given a change in government. Financial support for charities (in the last 15 years, the report says, government funding of UK charities increased dramatically) and relaxed regulations on political campaigning meant that the former Labour government had essentially turned the voluntary sector into a public relations mouthpiece.

The ideas in the IEA’s sock puppet paper were quickly picked up by government, notably, the Department of Communities and Local Government which published a paper titled, “50 Ways to Save: Examples of Sensible Savings in Local Government" in December, 2012.

Among the recommendations is number thirty-seven: stop funding sock-puppets and fake charities that call for more state regulations and more state funding.

The IEA, it should be noted, is itself registered with the UK Charity Commission as an “educational charity.”

Founded in 1955, this think-tank’s stated purpose is to “promote the intellectual case for a free economy, low taxes, freedom in education, health and welfare and lower levels of regulation.” It is not funded by government, but does accept corporate donations, and free-market philosopher Milton Friedman has stated that the influence of the IEA’s founder, Anthony Fisher, during the Thatcher administration was so strong that "the U-turn in British policy executed by Margaret Thatcher owes more to him than any other individual."

The IEA also has funded the writing of a long list of books, such as Climate Alarmism Reconsidered, which describes environmentalists as climate alarmists who use global warming as a 'justification for failed socialist policies' and Life’s Adventure: Virtual Risk in a Real World, a book that lists ozone depletion, climate change, tobacco, pesticides and nuclear power as 'junk science-based scares.'

The Labour governments led by Tony Blair and Gordon Brown did indeed make their mark on the UK’s charity laws.

Following a five-year review of the Third Sector and more than 80 hours of parliamentary debate, Tony Blair’s government passed the 2006 Charities Act.

For the first time since Queen Elizabeth passed the Charitable Uses Act in 1601, the meaning of charitable purpose was given a statutory definition including a list of 13 examples, including new additions such as the advancement of human rights and the the pursuit of impartial investigative journalism. Under this law, there are no limits to the amount of campaigning for political change a charity can undertake, so long as the political actions 'remain incidental or ancillary to the charity's purposes.'

Following the campaign against poverty in the UK launched by Save the Children, the right-wing press picked-up on the themes of the sock-puppet paper and accused the former government led by Gordon Brown of “changing the rules so charities could join political campaigns” in 2008.

However, the guidelines do explicitly state that a charity can use most or all of its resources on a political campaign, so long as political campaigning does not become the sole reason for the organization’s existence.

As Alison Dunn states in her article Charities and Restrictions on Political Activities in the International Journal for Non-Profit Law, the guidelines are perhaps an imperfect attempt at clarifying a very confusing body of law and of defining terms which are determined by the courts on a case-by-case basis, but the guidelines “overall are more encouraging to trustees, emphasizing that political conduct can be a legitimate and beneficial course of action for a charity.” 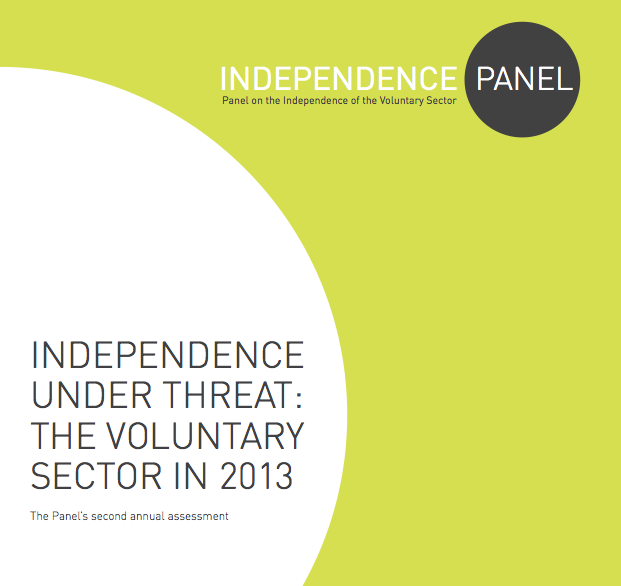 That said, even with these seemingly encouraging guidelines, studies from within the charitable sector claim the sector is losing its independence. On January 22nd of this year, the Panel on the Independence of the Voluntary Sector released its second annual report investigating the willingness of charitable organizations to speak freely. The panel’s main finding is that the independence of the sector has become increasingly threatened, and the source of that threat is the government.

The stated purpose of the “Big Society” project launched by David Cameron’s government has been to “re-invigorate civil society” in part by promising a bigger role to nonprofits in the delivery of public services.

This has indeed happened, as government has cut back on public services and contracted the work out to whoever wants the job – non-profits, social enterprises, and even corporations – creating a situation which has been described by some as a “race-to the bottom.”

According to the Panel’s recent report, this has led to a situation in which the voluntary sector “is increasingly being treated as interchangeable with the public and private sectors.” The loss of identity has led to less support from individual donors, and self-censorship on the part of organizations that fear the loss of contracts if they criticize the government.

Many of those contracts come with “gagging clauses,” and the report by the Panel on the Independence of the Voluntary Sector provides an example of one such clause:

The problem of being hindered by government funding is echoed in an article titled, “Unchaining the Wolf,” written by Dil Daly, director of Age Concern, an elderly assistance organization. Daly explains that medium-sized charities like his have come to rely on government contracts for their income. Today they faced reduced funding from all sources, and higher demands from a population in need. He offers no solution to the financial challenges but does assert that reduced public sector funding could actually be a good thing:

"In the recent past, a certain element of self censorship has existed as charities have been wary of 'biting the hand that feeds.' In essence we have tended to become a little too cosy with our funders and respond like lap dogs, doing our master’s bidding on demand. In future, the golden chains of funding won’t be there to make us think twice and I can foresee charities being far more prepared to challenge statutory authorities more vigorously."

So it seem that the IEA has support for its view from within the voluntary sector, on some level at least.

It is doubtful the organizations working on poverty relief and environmental protection would agree with the reasons the IEA seems to find the diminishment of independence so appauling, the reason being, as surmised by one writer:

"charities daring to point out that the often vulnerable people they represent might be suffering and that governments (of any stripe) might have a role in ameliorating or avoiding such harm. Instead, the IEA seems to prefer that charities work to clear up the mess created by ‘free markets’ but without making a fuss.”

With ongoing cuts to public services, England’s charities are struggling more and more to do even that. According to a 2012 survey, 90 percent of charities in the UK say their futures are at risk due to cash-flow problems and the uncertainties of results-based contracts.

It is this model that Canada seems keen to follow.

The 2012 budget was called a re-shaping of Canada’s social policy, with inspiration taken from Britain’s “Big Society.”

This is happening, moreover, in the wake of government attacks charities for political action, and tightening of the rules.

Our “Big Society” (otherwise described, in the UK context, as the biggest wave of outsourcing since the 1980s) will take its own form, but its hard to imagine that our voluntary sector will actually be strengthened by it.

That might sound just about right for the Conservative government, who likes to paint politically active charities as representatives of special interest groups.

If charities are made incapable of carrying out their essential tasks – holding government to account or demanding the relation between business and environmental protection is in the public interest – then their ability to bring benefit to the public will be severely limited.