Former TransCanada employee and engineer Evan Vokes, who released thousands of pages of records after he was dismissed by the corporation in 2012, believes that a newly acquired internal email shows his managers tried to discredit him for raising the alarm on their safety practices.

Vokes obtained the email in Feburary 2014 through access to information legislation, reports Mike De Souza for InsideClimate News. Most of the message was censored by TransCanada before release, but the first line clearly mentions "managing the EV [Evan Vokes] credibility issue."

"My understanding is that we have been reasonably successful at influencing authorities [redacted] and pointing out EV is disgruntled, and actually had the responsibility to correct these same matters and did not," reads the email, dated July 26, 2013.

TransCanada has not disclosed the identity of the employee who wrote the email or the "authorities" referred to in it. "We are not going to debate interpretations of the wording used by TransCanada staff members in old emails or private records," spokesman Davis Sheremata told InsideClimate News.

The previous records released by Vokes document internal safety issues raised within the energy company over its operations in Canada, as well as in the United States, where it hopes to build the proposed multibillion-dollar Keystone XL pipeline project. Vokes submitted the records as evidence when he appeared before a Canadian Senate committee hearing on energy policies in 2013.

Vokes believes TransCanada's management tried to discredit him because they got "fed up" with his allegations that the company was saving money by skimping on safety inspections and repairs. 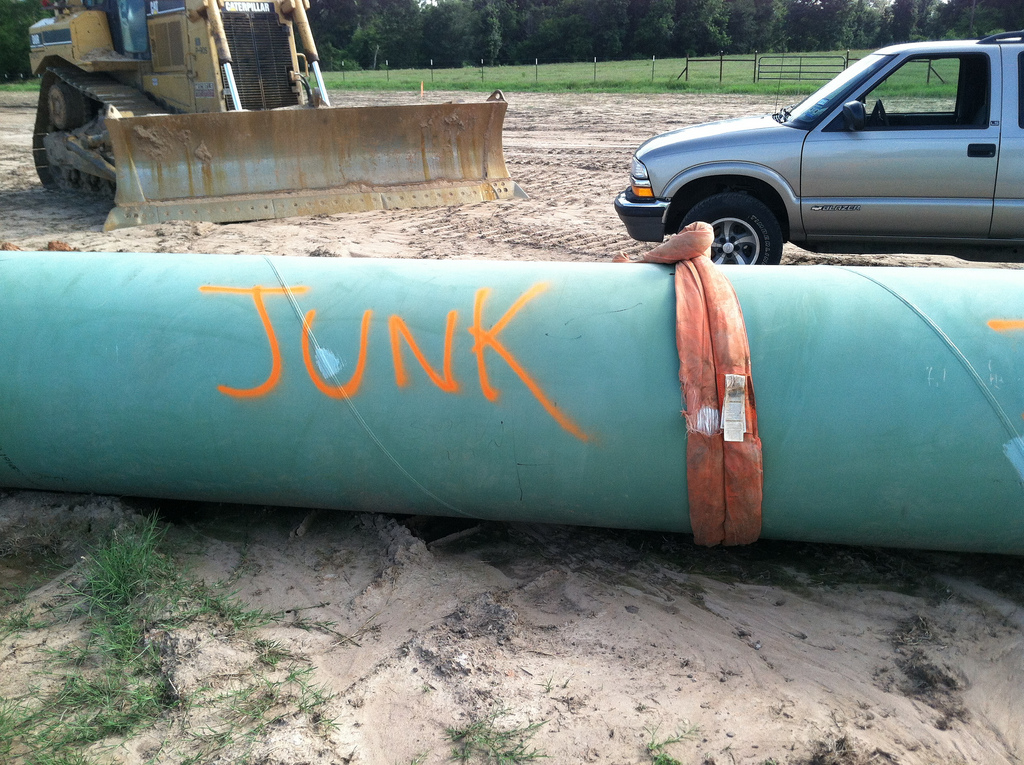 A pattern of dismissal

"There are literally thousands of cracks in the system but they sit there until somebody disturbs them," Vokes told InsideClimate News in an interview. "Whether it's the ground or frost, construction in the area, or a farmer doing work, suddenly all these substandard construction techniques can become a major problem because they were never dealt with during construction."

Vokes's records include discussions that took place within TransCanada about safety concerns that management dismissed. In a January 2011 email exchange, an engineering technologist, Russell Wong, was told by management to "stop these e-mails" when he warned them not to hire a welding company based on its poor performance history. Another engineering technologist asked whether the company would provide inspectors to examine the Keystone pipeline in a June 2011 email. Manager Tom Hamilton, in charge of quality and compliance for Keystone, wrote "Ha ha ha" in his email response.

Another series of internal emails from June 2011 between Vokes and other engineers and managers documents how TransCanada employees were unable to find records on the company's welding procedures for months, after they were reqested by provincial regulator Alberta Boilers Safety Association.

In another June 2011 email, Vokes himself was told by David Taylor, a manager of materials and engineering, to stop raising concerns and "accept where we are and become aligned with where we are going as a company."

TransCanada said that it could not comment on Vokes' eventual dismissal or whether the managers in the emails were disciplined, because of privacy and confidentiality issues.

Vokes collected most of the records over his five years working at TransCanada, where he specialized in "non-destructive" examination of pipeline infrastructure using tools and visual inspections. His complaints about pipeline safety led the National Energy Board (NEB) to conduct an audit of TransCanada's operations, released February 2014. The NEB found no immediate safety concerns, but concluded that TransCanada was breaking Canadian pipeline regulations in areas including "Hazard Identification, Risk Assessment and Control…Inspection, Measurement and Monitoring; and Management Review."

When asked by InsideClimate News about the email concerning Vokes, the NEB said that TransCanada did not try to interfere with the audits.

"At no time during numerous interactions between board staff and TransCanada staff did the company attempt to influence the board on the character of Mr. Vokes," NEB spokeswoman Erin Dottor said in an email. "The source of any complaint or issue identification in no way impacts the NEB's commitment to take action to mitigate or prevent potential hazards to public safety or environmental protection."

The controversy surrounding the proposed Keystone XL project has brought TransCanada's safety record under close scrutiny. The company's existing Keystone pipeline, which runs from Alberta to Oklahoma, has suffered at least 35 leaks or other incidents since it opened in June 2010. If built, the Keystone XL pipeline would transport 830,000 barrels per day (bpd) of oilsands crude from Alberta to refineries on the U.S. Gulf Coast, crossing several sensitive U.S. water sources. Oilsands development is currently the fastest growing source of greenhouse gas (GHG) emissions in Canada.

The Obama administration's decision on Keystone XL has been continually delayed since the project was first proposed in 2008, and has met with opposition in both the United States and Canada. The final decision on the project isn't expected till November, owing to the latest hurdle–an ongoing court case over the pipeline's route through Nebraska.

Dave Domina, a lawyer representing Nebraska landowners challenging the Keystone XL pipeline's route, said that "TransCanada has a tug-of-war going on between environmental safety and profit." He said that the emails acquired by Vokes probably couldn't be used in the court case, however, though they come into play if the state is forced to restart the approval process.

Meanwhile, Vokes has been notified by the federal privacy commissioner's office that it is reviewing the censored portions of the documents released by TransCanada to him, after the company agreed to an audit. The privacy commissioner's investigator will be meeting with TransCanada management face to face after the materials are reviewed, though the company has asked that Vokes not be present.

Indrapramit Das is a freelance writer, critic and artist. His work has appeared in Slant Magazine, Vancouver Weekly, Strange Horizons…