Walter M. Miller Jr.’s classic sci-fi book "A Canticle for Leibowitz" tells the story of a post-apocalyptic future in which a small group of monks strive to preserve the remnants of humanity's scientific knowledge. After the destruction of civilization, in the absence of physical records of its history, humanity repeats the worst of its mistakes.

There have been many tales over the years of the destruction of books. Sometimes, as with the sacking of the library of Alexandria, it was out of sheer thoughtlessness. Other times, it was with the clear intent of the reigning regime to banish knowledge that didn’t fit its worldview. However it happened, it was only in hindsight that we understood to what extent the loss set humanity back.

It’s hard not to think of these things when reading stories of the closure of seven of the eleven Department of Fisheries and Oceans libraries across Canada. Local media outlets have reported dumpsters full of books. The Winnipeg-based North/South Consultants brought a flatbed truck to the closure of the library at the University of Manitoba’s Freshwater Institute and packed it full with the history of Canadian water.

“There's a treasure trove of stuff there,” Don MacDonell, a spokesperson for North/South, which does field research and environmental impact assessments for government and corporate clients, told the Winnipeg Free Press. “In our field, aquatics, the library was quite valuable. It serviced the whole central and Arctic region.”

When word first broke that the Department of Fisheries and Oceans was closing the libraries, government officials promised that there would be no loss of vital historical material. Today many are skeptical of those claims.

In an interview with the CBC, former fisheries minister Tom Siddon called the move “Orwellian, because some might suspect that it's driven by a notion to exterminate all unpopular scientific findings that interfere with the government's economic objectives.”

Several scientists spoke anonymously to the Tyee’s Andrew Nikiforuk. "I was sickened," said a research scientist who had worked for the federal government for 30 years. "All that intellectual capital is now gone. It's like a book burning. It's the destruction of our cultural heritage. It just makes us poorer as a nation."

Green Party leader Elizabeth May, whose constituency of Saanich-Gulf Islands is home to one of the four remaining libraries, also condemned the move. “Consistent with their policy of muzzling scientists, the Conservatives have now moved on to trashing libraries,” she said. “This administration seems to be deliberately undermining our ability to make good policy decisions by limiting access to scientific evidence.”

On December 7, in response to the landslide of criticism, Fisheries and Oceans Minister Gail Shea sent out a press release ensuring that it is “absolutely false to insinuate that any books were burnt.”

“The decision to consolidate our network of libraries was based on value for taxpayers,” she said in the release. “The primary users of DFO libraries, over 86%, are employees of the Department. An average of only five to 12 people who work outside of DFO visited our eleven libraries each year. It is not fair to taxpayers to make them pay for libraries that so few people actually used.”

The scientific community did not find the argument convincing, including Jeffrey Hutchings, Canada Research Chair in Marine Conservation & Biodiversity at Dalhousie University.

“A logical extension of this argument proffered by DFO spokespersons is that it would not be fair to make taxpayers pay for the libraries and associated resources of the Supreme Court of Canada, the Bank of Canada, or even the Library of Parliament because ‘so few people actually used’ the libraries in question,” he told the Tyee.

Many of the research libraries facing closure are meant to act as resources for the federal government rather than the public, such as the library at the Maurice Lamontagne Institute. On the Institute's website, the research facilities are described as providing "the federal government with a scientific basis for the conservation of living marine resources, the protection of the marine environment, and safe maritime navigation, as well as to ensure the application of legislation designed for the integrated management of the marine environment and the protection of fish habitat." 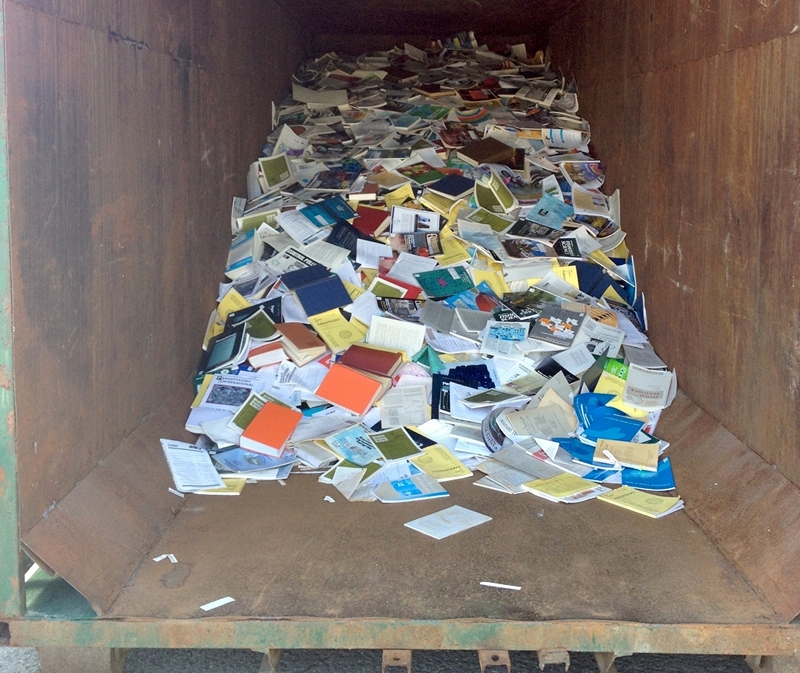 Contents from the Maurice Lamontagne Institute library fill a dumpster in July 2013. File from www.cpcml.ca.

A memo uncovered by Postmedia’s Mike De Souza said that the closures would only save the taxpayers about $443,000 per year, after millions of dollars had recently been spent renovating the St. Andrews Biological Station in New Brunswick.

It referred to the removal process not as digitizing, but as “culling” materials to make room in the remaining four libraries.

Shea did not address widespread concerns regarding the technical aspects of the digitization process.

In response to a request for more information regarding the culling process, DFO media spokesperson referred to the Fisheries and Oceans Canada Library Collection Development and Management Guideline released February 2013.

“The Department withdrew obvious duplicates from its collections and approached universities, academics, museums, community and non-government organizations, and other libraries and offered materials in the collection that were outside of the department’s mandate,” the department told DeSmog via e-mail.

At the time, scientists expressed skepticism regarding the logic behind the withdrawal of materials and feared that important historical documents may be lost.

“It is information destruction unworthy of a democracy,” said Peter Wells, an ocean pollution expert at Dalhousie University in Halifax, told the Vancouver Sun. He called the potential loss of materials a “national tragedy.”

Biologist and researcher Pamela Zevit worked on an early effort to digitize government research in the mid-1990s when she served the British Columbia’s Ministry of Environment. She remembers the excitement around providing searchable, easily accessible databases quickly falling away to the enormity of the task.

The biggest issues, she says, are quality control and maintenance. How do you assure the sensitive historical documents are properly scanned and who will maintain these archives over time and changes in technology?

It would be a mistake, Zevit believes, to think of digitized archives as infallible guardians of data. A recent article by University of British Columbia researcher Timothy Vines found that as much as eighty percent of data is lost over a period of two decades because changes in technology make storage formats obsolete.

“What happens if you lose information digitally and you have no hard copy resource or archive to go back to?” Zevit says. “All trace of it is eliminated from the planet unless somebody’s actually downloaded something at some point in time.”

As a researcher, Zevit doubts the federal government’s ability to follow through on its promises to maintain quality of service at the remaining libraries. “When I worked for government, I worked under the premise that disclosure and transparency were very important responsibilities,” Zevit says. “There’s no point in investing tens of thousands, if not millions, of dollars in curating information if it’s never accessible to anyone.”

As a freelance writer, Erika Thorkelson is dedicated to showcasing compelling stories that illuminate our world and how we live.…

As the First Nation considers an egg incubator to increase the Klondike River's Chinook population,...

Kelly Andersen’s resignation from the Canadian Groundfish Research and Conservation Society follows an investigation by...