In an unprecedented move, the Dzawada’enuxw nation is claiming in court that farming Atlantic salmon — which often carry disease — in their traditional waters constitutes a violation of Aboriginal rights

Willie Moon’s family used to catch hundreds of salmon a day on B.C.’s Kingcome River, ensuring a winter supply of smoked fish for members of the remote Dzawada’enuxw First Nation.

“This year I had my net in for the winter dog salmon [chum] and I believe I only caught 13 in the month of November,” Moon, a hereditary leader, told The Narwhal.

“That’s drastic and scary for our people.”

Moon and other members of his community were in Vancouver Thursday to file an Aboriginal rights lawsuit against Canada that challenges federal fish farm licenses within their traditional territory in the Broughton Archipelago — the latest action in the nation’s escalating bid to revive shrinking Pacific salmon and eulachon stocks.

If successful, the lawsuit would not only close fish farms that affect the Dzawada’enuxw nation but could potentially be used by other First Nations to shut down salmon farms throughout B.C.’s coast, according to lawyer Jack Woodward, who is representing the Dzawada’enuxw [pronounced ‘tsa-wa-tay-nook’].

“Somewhat unfairly, the focus has been on the provincial government’s role in this,” Woodward said in an interview. 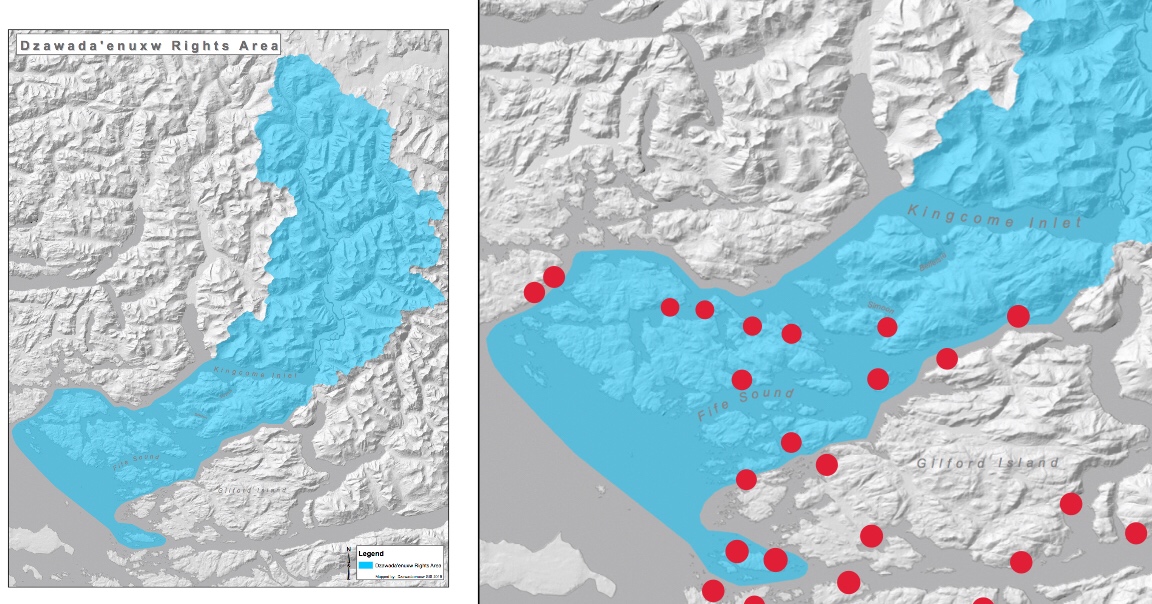 Left: A map of Dzawada’enuxw traditional territory, filed as part of the First Nation’s claim. Right: location of fish farms in the Broughton Archipelago.

Last May, the Dzawada’enuxw First Nation took its quest to shut down fish farms to a new level when it filed a claim of Aboriginal title in B.C. Supreme Court, claiming that tenures granted by the province to several companies — the leases that give the farms a place to operate — are not authorized because they are in Aboriginal title areas.

But the lawsuit filed Thursday marks the first time a First Nation has ever challenged fish farm licenses granted by Ottawa based on the assertion of Aboriginal right, said Woodward, who represented the Tsilhqot’in Nation in a landmark case that determined the nation holds title to about 1,900 square kilometres of its traditional territory in B.C.

“These challenges to the federal permits are different,” Woodward said in an interview. “They are challenges to the idea, in contravention of the Dzawada’enuxw’s Aboriginal rights, that you can introduce Atlantic salmon to Pacific waters. That’s the fundamental problem here.”

It states that viruses, including piscine orthoreovirus (PVR) are known to occur in farmed salmon raised in open net pen farms on the B.C. coast and can be transferred to wild salmon and eulachon populations.

It also claims there is a credible body of scientific evidence indicating a direct link between PRV and heart and skeletal muscle inflammation (HSMI), noting that both PRV and HSMI are known to have deleterious effect on fish.

Fish farms pollute and degrade the marine environment around the net pens and underwater lights can attract wild eulachon and salmon and expose them to increased risk of harm and predation, the statement of claim also says.

“I believe they’re doing a lot of damage to our seafood,” Dzawada’enuxw member Melissa Willie told The Narwhal. “I work in fisheries and I see the damage.”

All five species of salmon are usually found in the Kingcome River, although chum, coho and spring are the most common, Willie said. But last year salmon were so scarce that her smokehouse sat unused. She and other community members had to fill their freezers with sockeye caught outside of their community, said Willie, the DFN fisheries community coordinator.

Fish farms could remain in Broughton

In December, following negotiations with some First Nations but not with the Dzawada’enuxw, the B.C. government announced what it called a “ground-breaking” process.

The government said new recommendations would allow for an orderly transition of 17 fish farms, operated by Marine Harvest Canada and Cermaq Canada, from the Broughton area by 2024 and establish a “farm-free migration corridor in the Broughton in the short term to help reduce harm to wild salmon.”

But seven of the fish farms would be permitted to remain if aquaculture companies reach agreements with First Nations, and displaced salmon farms would be able to set up shop elsewhere on the coast.

Woodward also pointed out a different government may be in power in B.C. before the farms move.

And even though most of the tenures included in the phase-out are in the traditional territory of the Dzawada’enuxw, the nation was not part of the agreement, Woodward said.

“So it’s a bit audacious of all the parties to that agreement including the provincial government, to make an agreement about the timing and location of those tenures without consulting the party most affected.”

‘We’re looking at the bigger picture’

The Dzawada’enuxw First Nation doesn’t want to wait five years for fish farms to leave its traditional territory, said Moon, who took part in a Vancouver press conference an hour after the lawsuit was filed along with Woodward, elected Dzawada’enuxw chief Farron Soukochoff and Eddie Garder, president of the Wild Salmon Defenders’ Alliance.

“We still don’t feel it’s enough yet,” Moon said in an interview. “We’re looking at the bigger picture…protecting our territory.”

The Dzawada’enuxw says it has an Aboriginal right to harvest eulachon and salmon for food, ceremonial and social purposes in the “Dzawada’enuxw Rights area” which encompasses both land and sea and stretches from west of Fife Sound near Gilford Island, through the Kingcome Inlet fjord near Broughton Island, and up the Kingcome River.

Woodward said legal experts and First Nations will be watching carefully to see if the federal government adheres to its new policy of ‘respectful litigation’ on matters concerning Indigenous peoples, and to see “if they adhere to their stated embracing of the United Nations Declaration on the Rights of Indigenous Peoples and whether they are going to fight this one or concede.”

A 2018 report by Canada’s commissioner of the environment and sustainable development found the federal government has put wild salmon species in danger by not adequately managing risks associated with salmon farming.

Moon said his nation is determined to remove fish farms to protect wild salmon and eulachon – also known as a candlefish because of its oily composition – and a traditional way of life.

That way of life is showcased in a new exhibit that opened Thursday at UBC’s Morris and Helen Belkin Art Gallery, titled Hexsa’am̠: To Be Here Always. The exhibit features the work of Dzawada’enuxw artists and addresses threats to the land and waters of Kingcome Inlet through film, video, weaving, animation, drawing, language and song.

“I see the beauty, the quietness, and being able to be free there,” Moon said. “All the fish farms having an impact on our resources, that’s what scares us. Once that’s out of the way we’d feel at peace again and at one with our territory.”

Banner: Venture Point fish farm off Sonora Island, B.C. Photo: Tamo Campos
We hear it time and time again:
“These are the stories that need to be told and you are some of the only ones telling them,” John, a new member of The Narwhal, wrote in to say.