“[TransCanada] should reconsider its positions and show more transparency by revealing its real intentions behind its project in Quebec. The company should stop showing disregard to Quebecers and give us the real facts,” Christian Simard, director of Nature Québec said in a statement.

Earlier this week the Montreal-based news outlet La Presse reported that several sources in the Quebec government had confirmed TransCanada is no longer considering Cacouna, a port on the St. Lawrence River, as the site of an export terminal for the 4,600 kilometre west-to-east proposed pipeline.

TransCanada quickly denied the report. The Calgary-based pipeline company insists it will make a decision on Cacouna at the end of March.

The port is near the breeding grounds of endangered beluga whales and the proposal to build a terminal and subsequently increase oil tanker traffic through beluga habitat has been at the centre of controversy for months in Quebec. Ignoring the risks to belugas would likely enrage a Quebec populace already skeptical about the TransCanada project. 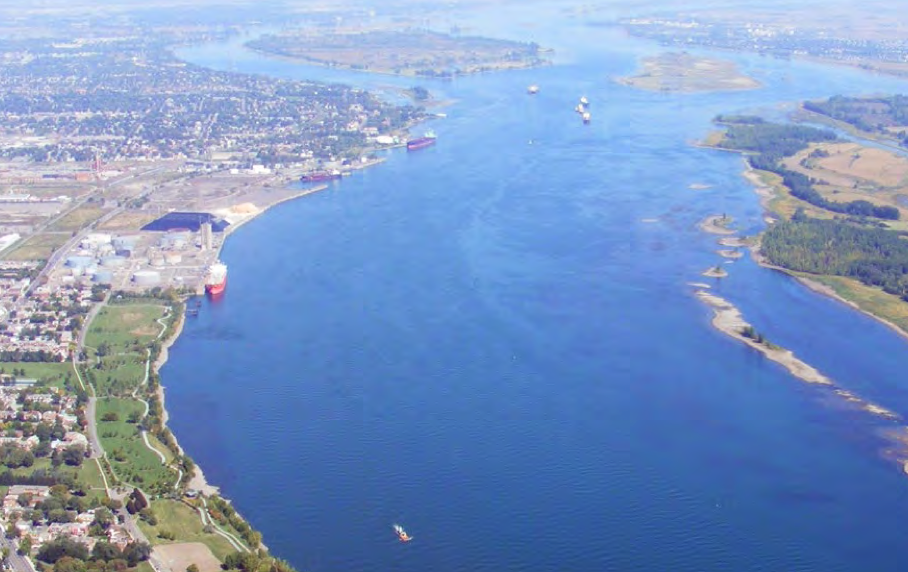 “TransCanada must confirm it has abandoned its plans in Cacouna and concede that such a platform cannot be built without having a great impact on the beluga population. Considering the fragile ecosystem of the region, which is already subject to intense pressures, we believe that the company should drop its plan to build a tanker terminal in the St. Lawrence River,” Karel Mayrand of the World Wildlife Fund Canada, stated.

Last December the Committee on the Status of Wildlife in Canada warned the St. Lawrence’s belugas are at even greater risk of extinction than they were ten years ago. The committee concluded the belugas should be on Canada’s species-at-risk list.

“The company refuses to admit that the Cacouna terminal project is dead and that there is no plan B. The company is trying to buy time and save face among its stakeholders,” Patrick Bonin, a Climate and Energy campaigner at Greenpeace Canada, said in joint press release on Wednesday.

Public concerns in Quebec about Energy East substantially increasing oil tanker traffic on the St. Lawrence may make it impossible for TransCanada to construct a terminal in Quebec if the project is approved. TransCanada has plans for a second export terminal Saint John, New Brunswick.

“The environmental consequences on both the land and the water associated with tanker accidents are usually catastrophic for the directly affected ecosystems. Cleanup and remediation efforts are always very expensive and often ineffective,” Émilien Pelletier, Professor Emeritus and Canada Research Chair in Molecular Exotoxicology in Coastal Areas at the Université du Québec à Rimouski, writes in the “Doubling Down on Disaster” report. 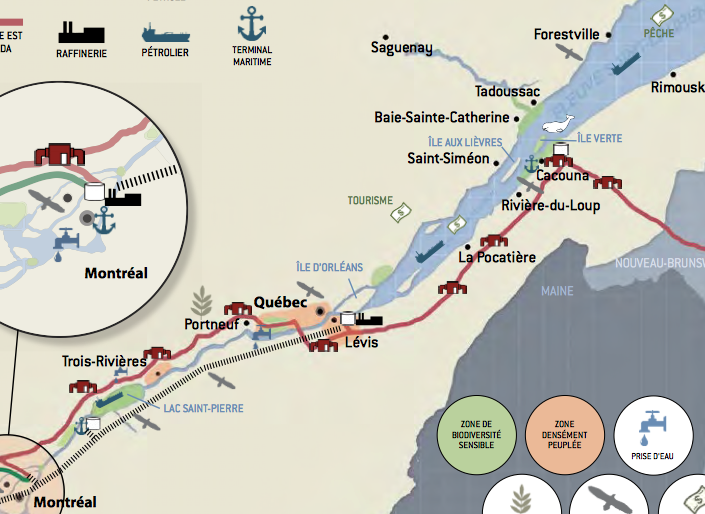 Illustrative map of Energy East's proposed route along the St. Lawrence in Quebec

The private company responsible for responding to an oil tanker spill on the St. Lawrence, Eastern Canada Response Corporation, is “vastly under-resourced” with only thirteen employees in Quebec. In its own study on Energy East, the emergency response company estimates it would take them twelve hours to respond to an oil tanker spill.

“Navigation professionals generally recognize the St. Lawrence as one of the most difficult waters to navigate in the world,” the second report on oil tanker traffic through the St. Lawrence states.

Frequent changes of current, sudden weather changes, the presence shoals and ice cover in the winter are some of the factors the report cites making piloting through the 1,600 kilometres of the St. Lawrence no easy task. The river’s ecosystem is home to 1,700 wildlife species.

“After mapping out the risks and threats entailed by the proposed strategies for transporting oil through the already-weakened St. Lawrence ecosystem, our organizations do not see how these projects can be compatible with biodiversity protection, human safety and economic activities that rely on the St. Lawrence,” the report concludes. The David Suzuki Foundation, World Wildlife Fund Canada and Société pour la Nature et les Parcs (SNAP) authored the report.

Groups in Quebec once again called on the National Energy Board (NEB), federal regulator of interprovincial pipelines, to suspend the regulatory process on Energy East until TransCanada clarifies where and if there will be an export terminal in Quebec.

“Dropping plans in Cacouna will have a significant impact on the pipeline route, on the people who are directly affected by it as well as on the expert assessment on the project. It would be unfair to keep the same deadlines for the NEB public hearing process, especially since many crucial aspects of the project remain in a state of uncertainty,” Karine Peloffy, director of the environmental group Centre Québécois du droit de l’environment (CQDE), said.

The NEB restricts public participation in the regulatory process on new pipeline projects to Canadians who are “directly affected” or possess “relevant information or expertise” on a project. Without major project details like the site of an export terminal, the board will be weaker and uncertain ground when determining who is an expert or directly affected by Energy East.

Canadians must apply to the NEB to participate in the Energy East regulatory process no later than March 3rd. TransCanada says it will make its final decision on Cacouna by March 31st.

Derek Leahy
Derek was born and raised in Brooklin and now lives in Ottawa. He worked in Germany for eight years as a historical tour guide. He...