In his first interview on the Site C dam, the chair of the federal-provincial panel appointed to review Canada’s largest current infrastructure project said the B.C. government was unwise to green-light the project without a review by the B.C. Utilities Commission and would have been better off to delay the decision by a few years.

“There’s a whole bunch of unanswered questions, some of which would be markedly advanced by waiting three or four years,” Harry Swain told DeSmog Canada. “And you’d still be within the period of time, even by Hydro’s bullish forecasts, when you’re going to need the juice.”

Swain, a former deputy minister of Industry Canada and Indian and Northern Affairs Canada, spoke to DeSmog Canada on his own behalf, not on behalf of the panel. In a wide-reaching interview, Swain also described the province’s failure to investigate alternatives to the dam as a “dereliction of duty.”

The B.C. government gave the go-ahead for BC Hydro’s Site C dam in December and construction is scheduled to begin this summer. If built, it will be the largest public infrastructure expenditure in the province’s history. The dam is facing six legal challenges, including one that alleges that Cabinet erred in dismissing key portions of the joint review panel’s findings on the project.

The dam — which was first turned down by the B.C. Utilities Commission in the early 1980s — would be the third on the Peace River and would flood 83 kilometres of the Peace Valley, impacting 13,000 hectares of agricultural land. The project is opposed by B.C.’s Treaty 8 First Nations, several of which have filed lawsuits.

Swain’s panel made 50 recommendations to the provincial and federal governments, but stopped short of recommending for or against the project.

“The decision on whether the project proceeds lies with elected officials, not with the panel,” the 471-page report read.

“I’m still strongly of the view that review panels are advisors and governments get paid to make the decisions and live with the consequences at the next election,” Swain told DeSmog Canada.

But that didn’t stop him from outlining how he believes the government has acted prematurely.

“You shouldn’t take decisions before you need to,” Swain said. “That means you’ll have much more information when you finally have to take a decision. Building electricity facilities in advance of need only costs money.”

‘Wisdom Would Have Been Waiting’

The panel’s report predicted that in the first four years of production, the Site C dam would lose at least $800 million because BC Hydro would generate more power than the province needs at a cost of $100 per megawatt hour — when the market price for that power is currently $30 per megawatt hour.

“Wisdom would have been waiting for two, three, four years to see whether the projections they were making had any basis in fact,” Swain said. “And they would have been able to make a better-informed decision and not necessarily a more expensive one.”

In its report, the panel wrote that it couldn’t conclude that the power from Site C was needed on the schedule presented, adding: “Justification must rest on an unambiguous need for the power and analyses showing its financial costs being sufficiently attractive as to make tolerable the bearing of substantial environmental, social and other costs.”

Some of the questions that still need to be answered, according to Swain, include the real cost and availability of alternatives, how B.C. should use its Columbia River rights, how British Columbians will react to increased electricity prices (which could decrease demand) and how the province’s liquefied natural gas industry will develop.

Panel Instructed Not to Pass Opinion on First Nations Rights

Asked why the panel didn’t render a “yes” or “no” answer on the Site C dam, Swain responded: “We weren’t asked to.”

Further to that, Swain — who wrote a book on the Oka crisis — outlined the limitations of the review process as it related to First Nations rights.

“They said that we were to catalogue the assertions of First Nations regarding treaty rights and aboriginal rights. But we were not to pass an opinion on them. We were not to say whether consultation had been adequate and so on and forth. If you are forbidden to talk about that, you can not come to a conclusion about the overall project,” Swain said.

“The question is: well, if we had recommended anything, what would we have said? And I think the conclusion is probably pretty apparent from the text. We would have said something to the effect that it might be wise to wait for a couple years and see if some of the projections on which the project rests eventuated. However, they didn’t ask — nor did they wait.”

In its report to the government, the panel said it did not have the information, time or resources to look at the accuracy of cost estimates and recommended that, if the project proceeds, costs should be examined in detail by the province’s independent regulator, the B.C. Utilities Commission.

“Knowing that the province had decided to exempt the project from the scrutiny of the utilities commission, we nonetheless felt that that was not good public policy and recommended otherwise,” Swain said. “They of course gave us the back of their hand.”

What did he think of the province ignoring that recommendation?

“I expected it entirely and I don’t think it was wise,” he added.

There were big financial questions — related to the borrowing of nearly $9 billion, the cost estimates for the project and the effect of rates on consumer demand — that the panel could not examine, Swain explained.

“That requires much, much more time and expertise,” he said. “Moreover it is a job that the utilities commission is specifically set up to be able to do.”

In documents obtained by DeSmog Canada via a freedom of information request, government spokespeople were prepped to respond to questions about why the project wasn’t referred to the utilities commission. The speaking notes were prepared for the Dec. 16 press conference announcing the B.C. government’s decision to move ahead with Site C.

“The BCUC does not actually have the capacity to do the kind of work that has been done by BC Hydro in analysing and reviewing the project, particularly the costs,” the speaking notes read.

“Well, whose fault is that?” Swain responded. “How about the owners of the utilities commission? It is their legislation that set it up to do specifically that job and if it hasn’t got the resources to do it, I think you’ve got to look back to the government.”

Swain noted that the government is essentially arguing that the proponent of the project, BC Hydro, should be relied on to review its own project.

“Is the answer therefore that such projects are only to be examined by the proponent?” Swain said. “Recall about the first thing that happened after they approved it was that they confessed, ‘Oh golly, the price is about a billion dollars higher than we thought.’ ” 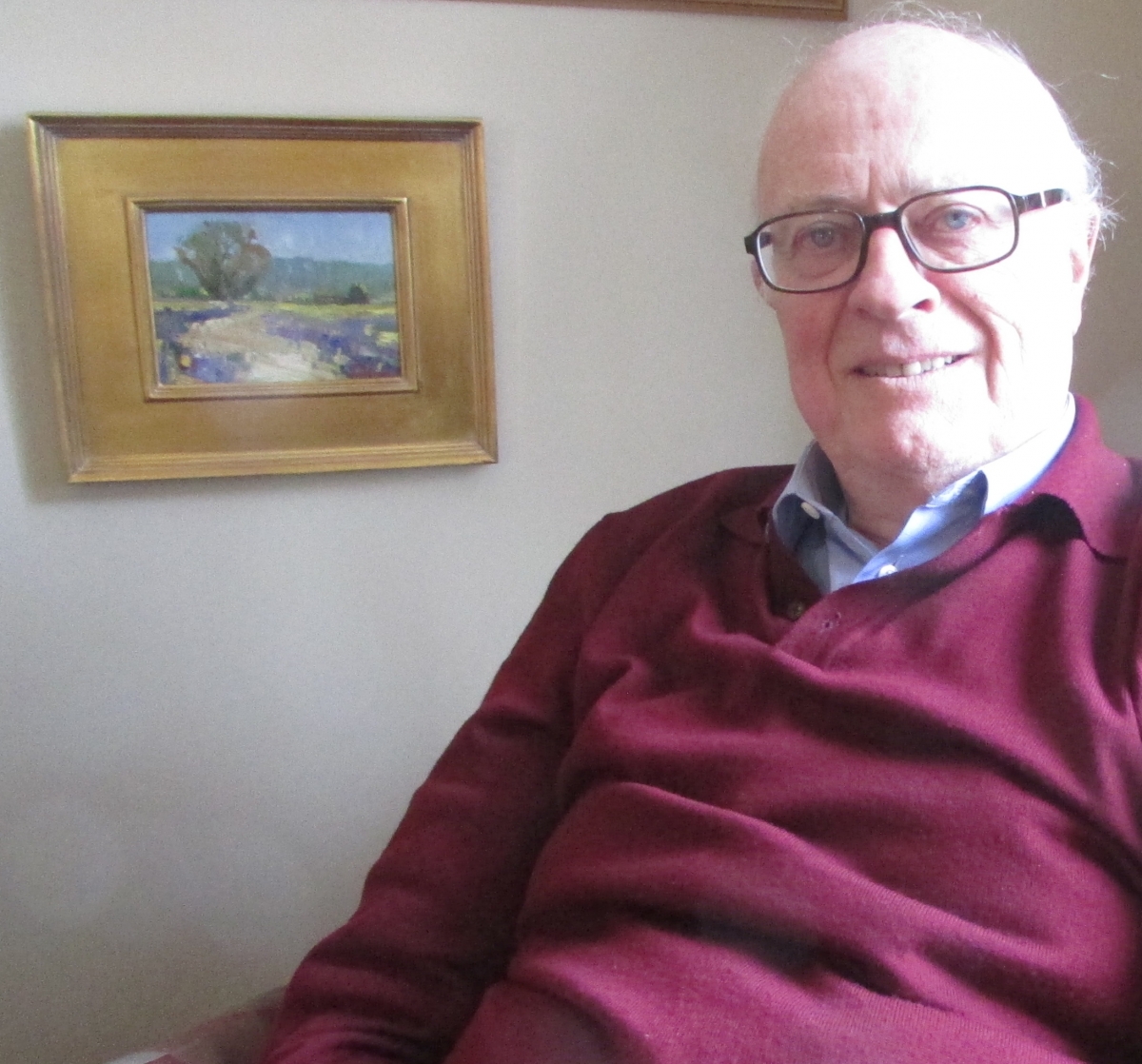 Harry Swain in his Victoria home during an interview with DeSmog Canada. Photo: Emma Gilchrist.

The speaking notes obtained by DeSmog Canada also said: “The costs of Site C have been independently reviewed by KPMG and an independent panel of contractors — work that the commission would have contracted out itself regardless.”

When asked why, despite being well aware of the KPMG review, the panel still recommended a review by the utilities commission, Swain responded: “If you ask Lockheed Martin what the cost of the F-35 is going to be, they — the proponents — will give you a number. And if you believe that number, I have a bridge in Brooklyn that I’d like to sell you.”

He noted that accounting firm KPMG was hired by the project proponent, BC Hydro.

“Consultants hired by the project proponent are being hired in part to demonstrate the reasonability of the work being done by the proponent,” he said. “The last thing that you’d expect would be for the consultants to BC Hydro to say ‘Oh golly, what an interesting error you’ve made.’ It just isn’t going to happen.”

And that’s at the crux of why the panel recommended the project be reviewed by the independent B.C. Utilities Commission — because its mission is “to ensure that ratepayers receive safe, reliable, and non-discriminatory energy services at fair rates from the utilities it regulates.”

“I think projects of that nature where the public purse — and the public interest much more broadly — is involved deserve a degree of scrutiny,” Swain said.

“I think the province was determined to go ahead with the project from the beginning.”

‘She was absolutely adored’: Iranian scientist spent her life fighting for Indigenous voices in conservation

A petite Iranian woman stands before a roomful of hundreds of experts in an Egyptian auditorium, wearing a flowing purple dress her mother sewed for...

A revealing update from BC Hydro says the project’s budget — which has grown from...

A significant shake near the Site C dam in 2018 seemed like reason enough to...

‘They are erasing our history’: Indigenous sites buried under Coastal GasLink pipeline infrastructure

As the hereditary chiefs of the Wet’suwet’en fight to stop the controversial $4.7 billion natural...