Exclusive New Photos: The B.C. Government’s Frantic Push to Get Site C Dam Past ‘Point of No Return’

Just two years ago only four in 10 British Columbians had even heard of the Site C dam. Now, the project — one of the most expensive and environmentally destructive in B.C.’s history — is making international headlines.

With construction ramping up, the high cost of the Site C dam is becoming more visible, and not just on the landscape.

Residents are being forcibly removed from their land. More than 100 kilometres of river valley — much of it agricultural land — is slated for flooding. Independent review processes, meant to ensure the project serves the public interest, have been circumvented and indigenous rights have been trampled.

B.C. Premier Christy Clark has vowed to get the $9 billion Site C dam past the “point of no return” before the May 2017 provincial election, despite a torrent of experts questioning the demand for the power.

Aided by permits issued by the Trudeau government, construction on the project is rushing ahead, while First Nations wait on a court ruling that could stop construction.

Thanks to donations from you, our readers, DeSmog Canada was able to send celebrated photographer, Garth Lenz, to the Peace to capture the ongoing construction and the landscapes and lives that stand to be affected by the Site C dam.

While the destruction may alarm some readers, it’s worth noting that most of the work so far has been isolated to in and around the site of the proposed dam and more than 80 kilometres of river valley remains untouched at this stage.

A road winds up the north bank of the Peace River near Fort St. John, where a work camp has been constructed on the river bank. Photo: Garth Lenz.

A temporary bridge has been built across the river near the proposed dam site. Photo: Garth Lenz.

The $470 million work camp on the dam’s north bank could house up to 2,000 workers. It will feature a movie theatre, licensed lounge, running track and basketball court. Photo: Garth Lenz.

An injunction notice at the site of the Rocky Mountain Fort, the first white settlement on mainland B.C. Protesters camped out at the site for two months last winter to stop construction, until BC Hydro won an injunction to have them removed. BC Hydro is now suing six Peace Valley residents for conspiracy, intimidation and trespass as a result of the protest camp, in what has been called a SLAPP suit. Photo: Garth Lenz.

Bridge construction on the Moberly River, which will also be flooded by the Site C dam. Photo: Garth Lenz.

Crews attempt to repair sloughing as a result of heavy rainfall that destabilized hills along the north bank of the river. Photo: Garth Lenz.

Ken and Arlene Boon’s farm has been in the family for three generations. Like others in the 100-kilometre flood zone, the farm will effectively be destroyed by the Site C dam. Half of the farm will be under water, with the other half — including the Boons’ family home and farm buildings — sacrificed to build a new highway. BC Hydro wants to begin construction on the section of highway that will pass through the middle of the Boons’ farm as early as Christmas. Photo: Garth Lenz.

Arlene Boon picks what may be her last harvest on the land her family has farmed for three generations. Photo: Garth Lenz.

The Site C dam will impact 13,000 hectares of agricultural land, including flooding 3,800 hectares of farmland in the Agricultural Land Reserve, an area nearly twice the size of the city of Victoria. Photo: Garth Lenz. 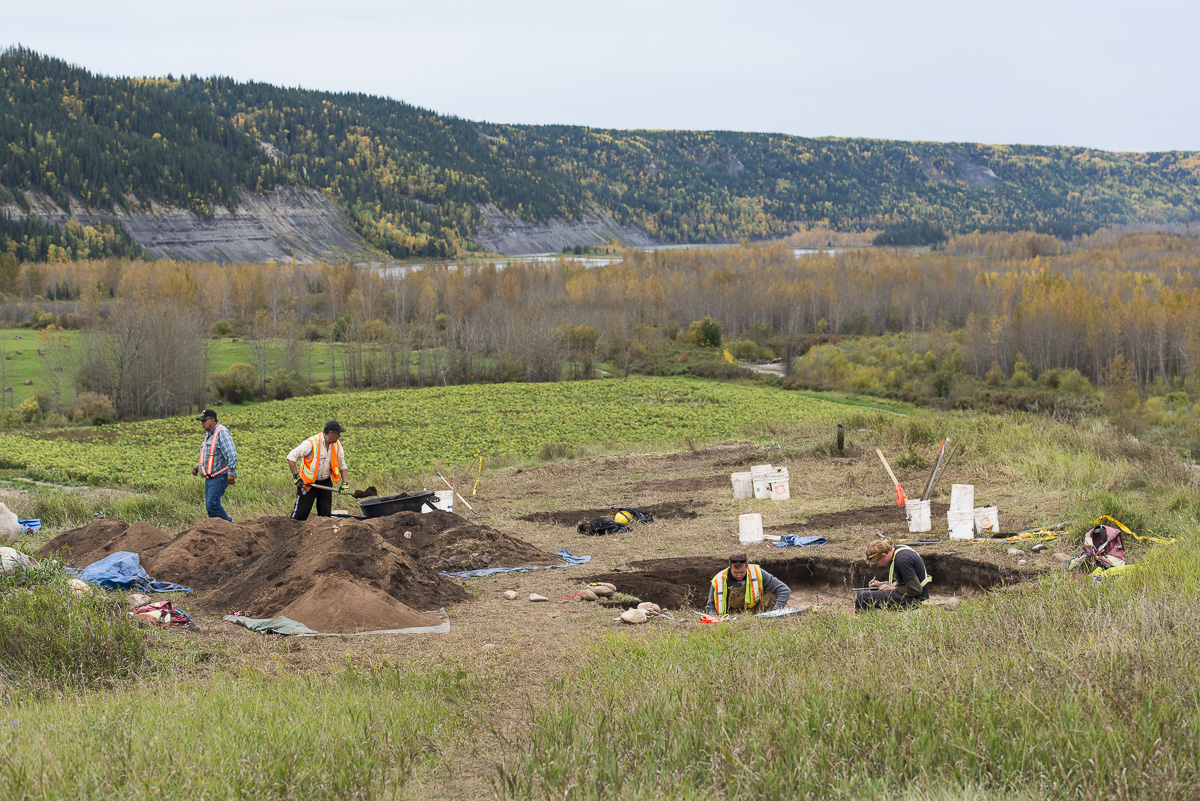 Archaeologists dig for artifacts on the Boons’ farm. The arrowheads found here indicate a long and rich history of indigenous habitation in the area, dating back at least 12,000 years. Photo: Garth Lenz.

Ken Boon in the kitchen of the Boon family home. Ken and Arlene have been told they must vacate their land by Christmas. Photo: Garth Lenz.

All of the low-lying areas seen here are slated for imminent destruction. Photo: Garth Lenz.

A rare limestone formation called a tufa seep, which took close to 10,000 years to form and covers the hillside with clear pools, rare mosses and calcified trees. This area is destined to be bulldozed and clear-cut as soon as this winter. Photo: Garth Lenz. 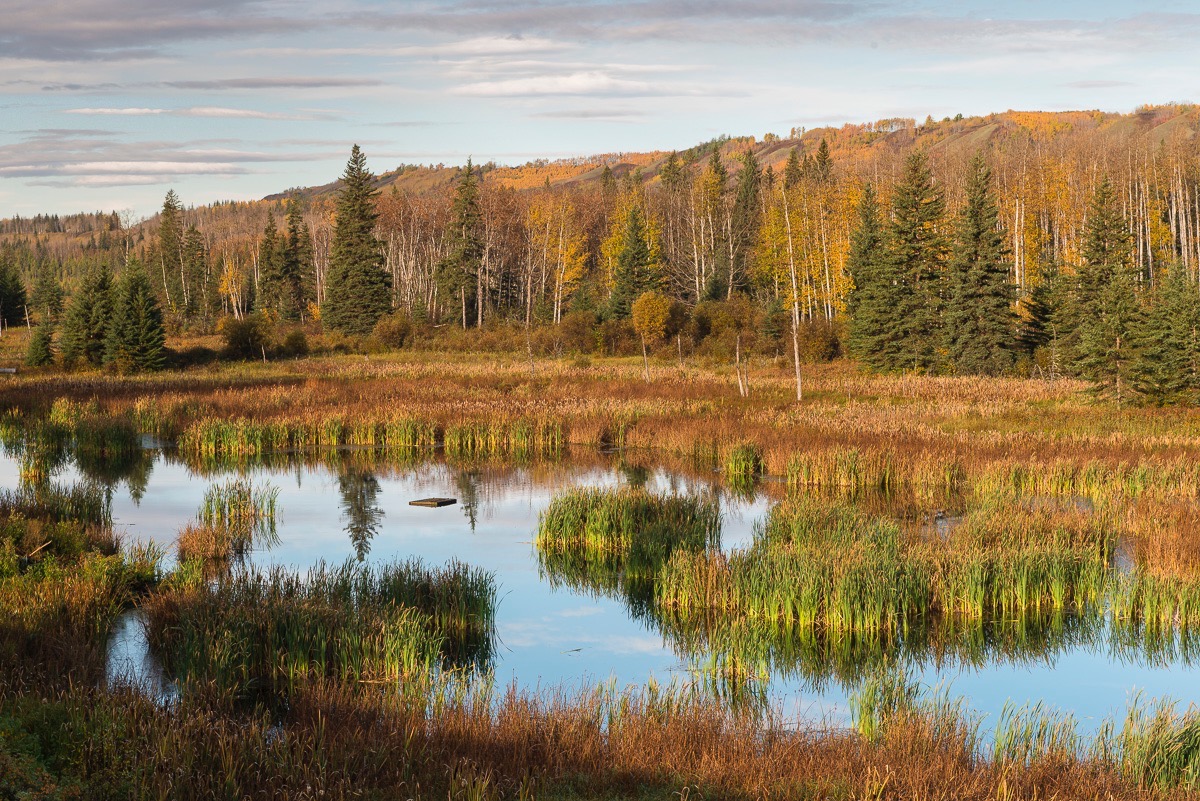 The Watson Slough, an important wetland conservation area, that will be flooded by the Site C dam. Photo: Garth Lenz.

This critical old-growth forest habitat along Moberly River is slated for destruction by the Site C dam. Photo: Garth Lenz.

The Bear Mountain Wind farm is located near Dawson Creek, B.C. With a newly installed solar hot water system at city hall and the proliferation of solar panels on the roofs of businesses, the city plans to become the renewable energy capital of B.C. The Site C review panel didn’t have the mandate to consider alternatives to the Site C dam but criticized B.C. for failing to investigate alternatives like wind, solar, run-of-river hydro and geothermal power generation. Photo: Garth Lenz.

After looking at these photos, you may be asking yourself: “So is the Site C dam ‘past the point of no return?’ ”

“It’s clear even more so as each day goes by that there really is no business case for Site C, especially with Hydro’s own electricity demand decreasing significantly,” Marc Eliesen, former CEO of BC Hydro, told DeSmog Canada this summer.

Eliesen pointed to examples from other provinces where failed projects have been halted mid-way.

For instance, in the 1970s, Manitoba Hydro began to build a large dam on the Nelson River, yet after 2.5 years of construction, it became apparent that the long-term power forecasts had changed and construction was suspended.

“Can you postpone, can you suspend, can you cancel Site C? Basically the experience in other jurisdictions shows that you can if the end result shows that the cost to the ratepayer will be more than if you postpone or suspend.”

B.C. Premier Christy Clark has vowed to get the $9 billion Site C dam past the “point of no return” before the May 2017 provincial election. Here’s what that looks like.

Police made arrests Monday on the Morice River bridge, the sole entrance point to the...