Internal documents released via Freedom of Information laws show that, while the B.C. government was publicly apologizing to the Fort Nelson First Nation for exempting natural gas plants from environmental assessments without consultation, the province quietly used a loophole to allow the exemptions to continue — a loophole that persists to this day
Ben Parfitt
Jan 30, 2019
7 min read
This article was originally published on Policy Note.

On April 16, 2014, the B.C. government was forced to rescind a controversial piece of legislation just two days after it came into force.

It was a change fossil fuel companies and major donors to the then-ruling BC Liberals had been clamouring for as they ramped up drilling and fracking for natural gas in the northeast of the province.

Yet 48 hours after the exemption was put in place through an Order in Council, B.C.’s Environment Minister, Mary Polak, was forced to issue a mea culpa that hinted at an embarrassing lack of consultation with First Nations.

Nearly five years later, the events surrounding Polak’s jaw-dropping turnaround are worth revisiting in light of the current government’s overhaul of B.C.’s Environmental Assessment Act — the same piece of legislation that Polak so ill-advisedly set out to change.

Thanks to documents the Fort Nelson First Nation obtained through a Freedom of Information request, we know more about what happened back in Polak’s day. 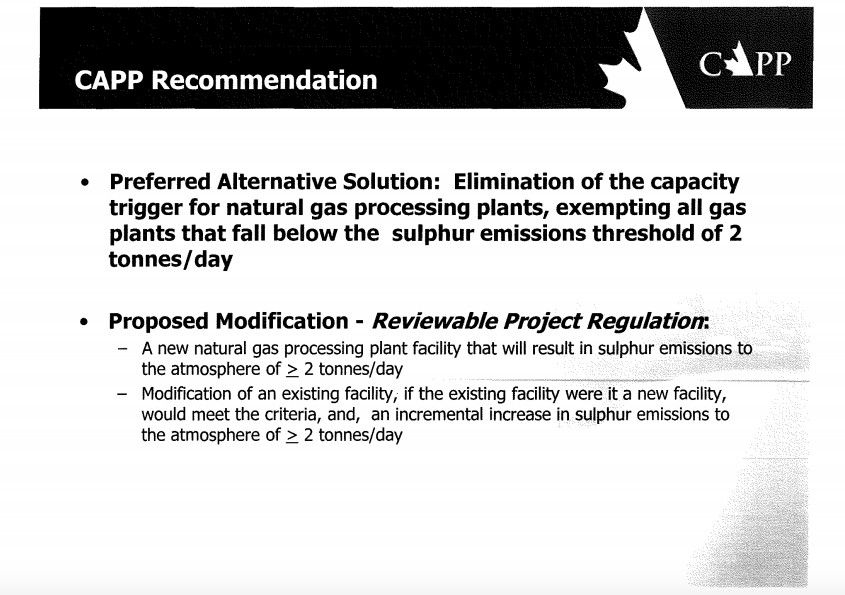 A slide from a CAPP presentation to the B.C. government. The industry lobby group recommended certain gas plants be eliminated from provincial environmental assessments.

So did Encana Corporation — one of the province’s top natural gas producers and a substantial political donor, primarily to the BC Liberals but also to the NDP.

With the stroke of her pen, Polak formally ended the requirement that “upstream” natural gas processing plants must undergo provincial environmental assessments.

The change paved the way for speedy approval of such plants, of which Encana was known to want to build three. The plants, now built, owned and operated by Veresen Midstream LP, were designed to take raw gas from the growing network of drilled and fracked natural gas wells in northeast B.C., strip the gas of valuable liquids such as condensate, and then send the processed gas on its way to customers.

The same documents also show that Polak’s staff and others in government knew that what they were doing would be vigorously opposed by First Nations, whom they had pointedly failed to consult.

When the Fort Nelson First Nation found out, it was furious.

Making matters worse for Polak and her cabinet colleagues, the First Nation was scheduled to host an “LNG Summit” only two days after the regulatory change came into effect.

The matter quickly blew up in the government’s face, forcing Polak to rescind the regulatory change on April 16, 2014.

“Our government is committed to a strong, respectful and productive relationship with First Nations,” Polak said in a prepared statement. “That is why we will rescind the amendment that would have removed the requirement for an environmental assessment…”

That same day, Fort Nelson First Nation Chief Sharleen Gale stood on the stage at the LNG Summit and asked provincial government delegates in attendance to leave the hall.

Video of the meeting shows those delegates walking out of the hall to the steady beats of a line of First Nation drummers.

Meanwhile, behind the scenes, provincial officials tried to lessen the damage by writing to Gale.

A draft of the letter, contained in the FOI package released to the Fort Nelson First Nation, was written by Laurel Nash, then-chief negotiator for B.C.’s LNG and Strategic Initiatives in the Ministry of Aboriginal Relations.

“We take full responsibility for not engaging with you on this change or even advising you that it was going to occur prior to making the public announcement. This is not how we want to work together now and in the future,” stated the letter, which circulated in four different government ministries as well as the provincial Oil and Gas Commission.

An internal e-mail shows former B.C. deputy minister of the environment arranging a call to discuss managing the reaction of Treaty 8 First Nations, referred to as “T8” in this message, in advance of the government’s announcement to exempt proposed natural gas plants from environmental reviews. The Fort Nelson First Nation was not consulted on this exemption.

But if anyone thought this signalled a change in direction, they were mistaken.

Polak may have been forced to backtrack, but she and her cabinet colleagues fully intended to continue exempting natural gas plants from environmental assessments, thereby saving the likes of Encana undisclosed amounts of time and money.

How do we know this?

Because Encana built not one, not two, but three massive gas processing plants in a row in northeast B.C. and each one of them was exempted from assessments.

The first of those plants — the Sunrise plant — was the largest of its kind built in western North America in 30 years. It was exempted from assessment shortly before the government’s short-lived regulatory change was made.

Then two other plants — the Saturn and the Tower plants, both of which are of a similar scale to the Sunrise plant —  were subsequently exempted by the B.C. Environmental Assessment Office after Polak was forced to back down and rescind the regulation.

These approvals happened despite the fact all three plants gobbled up land in B.C.’s allegedly protected Agricultural Land Reserve, and over the objections of local First Nations who were alarmed by the “cumulative” threats posed by multiple energy industry developments in their territories.

What the province failed to achieve by the blunt force of scrapping the regulation all together, it achieved through the back door.

Under Environmental Assessment Office rules, any company building a “major” or “reviewable” project can request that the office waive the requirement for a formal assessment. More paperwork is involved than if the regulation didn’t exist, that’s all.

Encana asked three times to be exempted, and each time its wish was granted.

Those decisions did not happen in a political vacuum. The FOI record clearly shows that the government of the day was committed to getting those gas plants built with no environmental assessments getting in the way.

This is the legacy that the current government inherited.

It knows that allowing the Environmental Assessment Office to retain broad discretionary powers to exempt major projects from formal environmental assessments is an affront to the very idea of free, informed prior consent — a cornerstone of the UN Declaration on the Rights of Indigenous Peoples, which the current government has sworn to uphold.

The problem with exempting major projects from environmental assessment

Unfortunately, the government’s recent revisions to the Act would see the Environmental Assessment Office retain the same sweeping discretionary powers as before, with the only caveat being that if the office recommends a project be exempted from review, then the minister would have to sign the actual exemption order itself.

This minor change marks a tiny step forward by placing the onus on the minister, but it is hardly one that should comfort First Nations or the general public.

We have a law in place that’s supposed to ensure a modicum of environmental protection by requiring that all such projects are assessed before being built. When governments allow — or indeed encourage — one industry to get around such rules, we have a problem.

The cleanest way to resolve that problem is to end the Environmental Assessment Office’s discretionary powers to exempt projects. No exceptions.

Ben Parfitt is a Victoria-based journalist and has written on water, energy, forestry and climate issues for many years. He…