Share
The Nuchatlitz Inner Basin on Nootka Island in the Nuchatlaht First Nation's traditional territory. The nation is currently engaged in legal proceedings to claim title to their land. Photo: Troy Moth
In-Depth

The province is arguing the Nuchatlaht, who have never ceded control of their traditional territory in Nootka Sound on Vancouver Island, abandoned their land — while the nation reminds the court their land was stolen
Judith Lavoie
Dec 13, 2019
10 min read

On the same day the B.C. government passed legislation embracing the UN Declaration on the Rights of Indigenous Peoples (UNDRIP) in late November, lawyer Jack Woodward was in court representing the Nuchatlaht First Nation in a historic land title case.

“I was on my feet the day it came into force, so I could present it to the court,” Woodward told The Narwhal.

“It had its first test before the ink was dry.”

But Woodward — renowned for his role in drafting Section 35 of the Canadian Constitution, which enshrined Indigenous rights in the 1980s — said the newly minted law has meant very little to the Nuchatlaht case and arguments being used by B.C.’s lawyers in courts.

The province claims the Nuchatlaht do not have legal claim to their lands because the nation abandoned its territory, Woodward said.

“The province is completely wrong on the facts … They did not abandon Nootka. The lands were stolen and they were forcibly ejected,” Woodward said.

“I said to the judge that not only are these pleadings disgraceful, objectionable and distasteful, they are now illegal.”

B.C.’s new law acknowledges that UNDRIP’s principles are specifically written with concern that “Indigenous peoples have suffered from historic injustices as a result of … their colonization and dispossession of their lands, territories and resources.”

The declaration also recognizes the “urgent need to respect and promote the inherent rights of Indigenous peoples … especially their rights to their lands, territories and resources.”

Article eight of UNDRIP says governments must use “effective mechanisms” to prevent the dispossession of Indigenous lands and resources.

The Nuchatlaht’s traditional territory lies on the west coast of Vancouver Island, encompassing  a large part of Nootka Island, Nuchatlitz Inlet and part of Esperanza Inlet. While the nation argues it maintained strong ownership over its traditional territory once European settlers arrived, in more recent history the land was parceled out under B.C. laws, giving industry — and in particular, logging companies — access to the land. 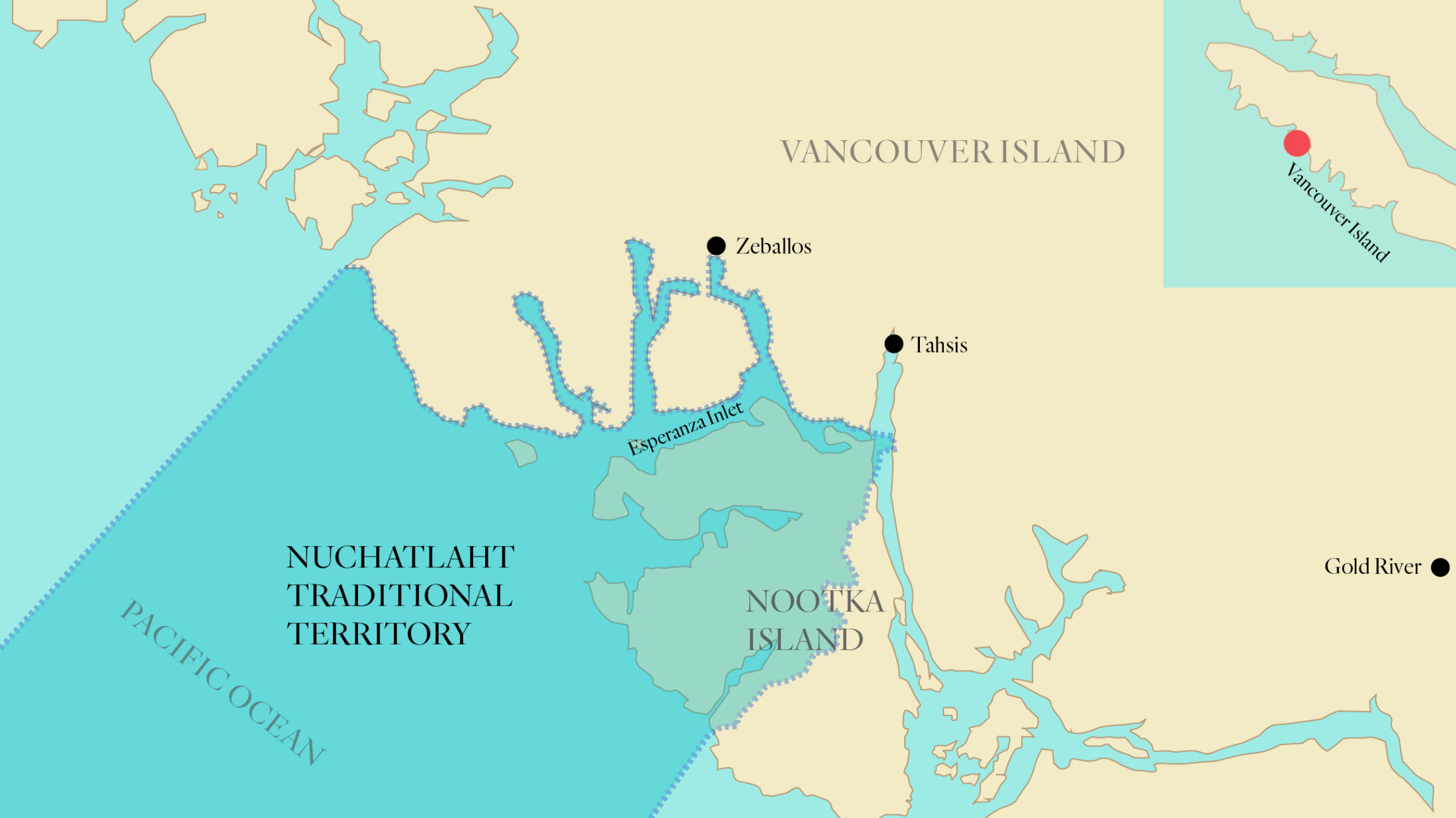 It is the first title case to be heard since a precedent-setting decision in 2014 granted the Tsilhqot’in First Nation rights to 1,750 square kilometres of its traditional territory near Williams Lake. That case, fought by Woodward, marked the first time in Canadian history that Indigenous title to land was granted.

“Tsilhqot’in was decided five and a half years ago and we haven’t had any new cases. I thought with the Nuchatlaht … we have a new court, new government, new Supreme Court ruling — and I thought this could be done,” Woodward said.

But the case has been caught in pre-trial limbo for nearly three years as the province seeks to establish the Nuchatlaht’s abandonment of its territory, Woodward explained.

“There has been every possible resistance” to the claim the Nuchatlaht maintained its territory, Woodward said, “including some that are, in my view, improper and distasteful.”

Government lawyers even argued that the Nuchatlaht nation, which has 164 members, no longer exists, Woodward said.

Nuchatlaht territory a ‘place of love’

In the late 1980s, when logging of Nootka Island began in earnest, significant water problems developed. Many Nuchatlaht members moved to the main reserve of Oclucje, about 12 kilometres from Zeballos.

Wealth from the ocean has always supported the Nuchatlaht people who, for centuries, have harvested food from the water surrounding their traditional territory.

“It is unique. It’s a place of sharing and a place of love,” he said.

That’s why the Nuchatlaht Nation must win title over the land, before the wealth is destroyed, Little told supporters at an event to raise funds for the court challenge, hosted by Sierra Club BC and Wilderness Committee in early December.

Old-growth logging by Western Forest Products has destroyed salmon spawning streams on Nootka Island, leaving little for the people who lived on the land for countless generations, Little said.

“We believe, we strongly believe that we must fight until we own it and with that ownership comes the responsibility to protect … We are trying to regain all our wealth and start managing it properly,” Little said.

Jordan Michael, Nuchatlaht hereditary chief, said the fish-bearing creeks and rainforests of Nootka Island are vital habitat but governments seem to care only about economics.

“There has been industrial clearcut logging. There’s no thought about tomorrow. It’s take everything now,” he told The Narwhal.

“Salmon are in decline. We are just trying to hang on to the last of the habitat and it’s all slated to be logged. That’s the last of the good fish streams that they haven’t decimated already,” he said.

“It doesn’t matter if we put up opposition. They pretty well do what they want.”

However, it now appears Western Forest Products, which is dealing with a lengthy strike, has agreed to delay logging on Nootka until completion of the court case, Michael said.

The company told The Narwhal it could not comment as the case is before the courts.

As far as Woodward knows, this is the first time B.C. has deployed the argument of abandonment to challenge a land claim.

The legal tack has led to a strangely twisted situation for the Nuchatlaht, with provincial lawyers requesting the nation provide documents proving they did, in fact, abandon their territory.

“In a civil case, nobody can conceal documents,” Woodward said. “So if you have a document that helps a case, you have to produce it.”

“This is getting to the point of not just absurdity — it’s not just silly — it’s oppressive. It’s an extremely hostile act for the province.”

The Nuchatlaht case is not the first time provincial lawyers have been accused of using inappropriate arguments to battle First Nations in court. Last year, the Union of B.C. Indian Chiefs took the unusual step of writing an open letter to Premier John Horgan denouncing legal arguments made by BC Hydro as a form of “neo-colonialism” and demanding a formal apology from the provincial government. BC Hydro’s lawyers made the arguments during a B.C. Supreme Court hearing for an injunction application by West Moberly First Nations to halt work on the Site C dam on B.C.’s Peace River, pending a full civil trial to determine if the project violates treaty rights.

A letter Michael sent last month to Attorney General David Eby about the Nuchatlaht case says Crown lawyers “continue to make our case far more expensive than it should be, using every possible tactic of procedural delay.”

“This is not the honourable conduct of litigation. We ask you to investigate,” says the letter.

“We are happy to face resistance to our assertion of rights based on principle, but we do not think the Crown is acting honourably when the main impediments to justice are caused by Crown lawyers unreasonably forcing great cost and delay upon us, for no principled reason.”

An email from the Ministry of the Attorney General, in response to questions from The Narwhal about tactics used by government lawyers, said “it would be inappropriate to make further comment” as the matter is before the courts.

Woodward said the province’s lawyers have now also pulled in two neighbouring First Nations, the Ehattesaht and the Mowachaht, into the fray, asking them to also produce documents proving the Nuchatlaht’s land abandonment. When the nations declined, the province initiated legal proceedings against them.

Woodward said B.C.’s Attorney General acts on behalf of all British Columbians and he suspects most people would be dismayed to know the province is conducting itself this way.

“It’s a repulsive pleading for a modern government. It harkens to the early half of the 20th century. It’s distasteful. And I’m using these words — distasteful, oppressive, offensive — intentionally,” Woodward said.

Change is going to take political action from the top, he added. “It’s going to have to take the courage of the Attorney General to say ‘back off.’ I know he’s a busy man and he has a lot on his plate but he cannot remain passive on this.”

Nuchatlaht’s living record of occupation is on the land, in the trees

About one-third of Nootka Island has been continually occupied by Nuuchatlaht people, with the remaining area occupied by the Mowachaht First Nation, Woodward said.

“They, along with the Mowachaht, have the longest continuous record of European contact in B.C. and the most well-documented presence on the territory because all these Europeans made journals and diaries and logs and noted them there,” Woodward said.

Evidence dating back to the first European contact in 1789 shows Nootka Island and land around the surrounding inlets was occupied by Nuchatlaht people.

“It is spine-tingling how clear the evidence is.”

Some of that evidence continues to remain at risk due to logging, Woodward said, because the presence of culturally modified trees act as some of the starkest evidence of territorial occupation.

“By and large these trees are culturally modified,” Woodward said. “It was and continues to be a living museum of their existence in that forest.”

There is a spectacular collection of nearly every kind of cultural modification you can think of, he added.

“It’s quite moving, actually. Except that 80 or 90 per cent of it has been cut. So then you look at the stumps and you can see there were culturally modified trees that were cut down.”

Nuchatlaht visions to heal the land

Efforts are already underway to restore salmon habitat, using the innovative idea of creating salmon parks around the watersheds of Nootka Sound.

The parks would recognize that the entire coastal ecosystem is interconnected, meaning the forest habitat and stream banks must be protected along with the stream channels, said Roger Dunlop, biologist with the Nuu-chah-nulth Tribal Council’s Uu-a-thluk Fisheries.

Salmon production has dropped about 80 per cent over the last 20 years, Dunlop said.

However, experience has shown that restoring habitat damaged by logging, when stream banks have eroded, sedimentation persists and 500-year-old trees have been removed, is an almost impossible task costing billions of dollars, Dunlop said.

Instead, salmon parks would encourage the land to heal itself with the help of an Indigenous guardian program and partnerships with other agencies, he said.

– With files from Carol Linnitt

The Nuchatlitz Inner Basin on Nootka Island in the Nuchatlaht First Nation's traditional territory. The nation is currently engaged in legal proceedings to claim title to their land. Photo: Troy Moth
Published By

9 things you need to know about the proposed open-pit coal mine near Smithers, B.C.

Telkwa, B.C., is a small town at the confluence of the Telkwa and Bulkley rivers,...

In our latest newsletter, we examine how nature-based climate solutions could be a game-changer in...

Baffinland owns Canada’s northernmost mine. Now Greenland has a say in its expansion plans

A proposal to double production at the Mary River iron ore mine is currently under...