Kinder Morgan officially submitted a 15,000-page application for the Trans Mountain pipeline expansion to the National Energy Board (NEB) today, triggering what will no doubt be a lengthy and heavily scrutinized review of the controversial project. The submitted file stands over two metres tall and fills 37 binders.

According to a Kinder Morgan press release “the application filing follows over a year and a half of engagements with pipeline and marine communities, a detailed environmental and socio-economic assessment, route assessments, and other various marine and terrestrial analyses and studies.”

Karen Campbell, staff lawyer with Ecojustice, says it is difficult to say what exactly the application documents include. “Now that the application is out, we will be looking at it carefully and we expect to be involved in the process in some way, shape or form,” she said.

If approved, the expansion project will nearly triple the capacity of the 1,147 km Trans Mountain pipeline from 300,000 barrels per day to 890,000 barrels per day. To accommodate the increased oil, Kinder Morgan is proposing to build a new pipeline from Edmonton, Alberta, to the Burrard Inlet in Burnaby, B.C., create new and modified facilities and add three berths at the Westridge Marine Terminal in Burnaby. The pipeline carries a variety of hydrocarbon products including diluted bitumen from the Alberta oilsands.

The expansion project is expected to result in a seven-fold increase in tanker traffic in the Burrard Inlet. Currently the Kinder Morgan terminal services five tankers a month. If the project is approved that number could jump to 34 per month, or more than 400 annually. 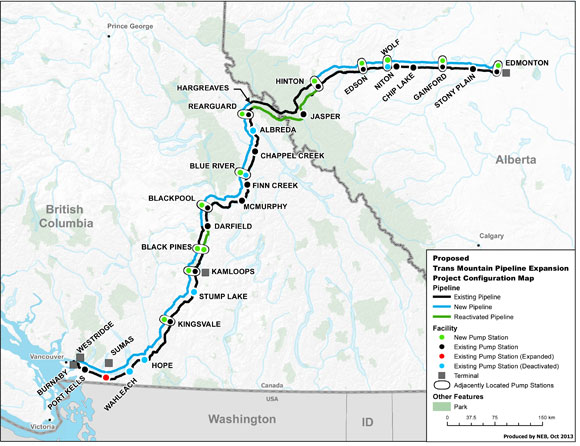 “The proposed tanker route is a ‘high risk’ area," says Sierra Club BC's campaigns director Caitlyn Vernon, "and the provincial government has acknowledged that effective oil spill clean-up is impossible under many scenarios on the B.C. coast. Instead of investing in the possibility of toxic jobs in oil-spill clean-up, why not invest in green jobs instead? Building retrofits, renewable energies and low-carbon transportation options provide more jobs than the oil and gas industry.”

More than 130 First Nations have signed the Save the Fraser Declaration opposing oilsands pipelines, and the Union of BC Municipalities passed a motion opposing oil tanker expansion on the B.C. coast in 2012.

According to the National Energy Board, a review of Kinder Morgan’s application will consider the economic need and feasibility of the project as well as potential environmental and socio-economic effects. The federal review will also consider appropriateness of the general route, land requirements, and design of the project.

In addition, First Nations’ interests will be taken into consideration as well as safety, spill response and preparedness.

The National Energy Board will also hear from various intervenors throughout the hearing process. Recent changes to environmental assessment legislation severely limit who can participate in the hearings and what issues those participants can speak to. Environmental group ForestEthics Advocacy recently filed a suit against the federal government for the changes, stating the new rules limit the legitimate participation of the public in the hearing process and prevent participants from discussing critical issues such as climate change or expansion of the Alberta oilsands.

Vancouver city councillors are considering a motion that would direct city staff to register as intervenors in the hearings. A motion filed in early December by Vancouver Mayor Gregor Robertson proposes staff seek intervenor status to argue against the “unacceptable risk” the project poses to “Vancouver and the region’s vibrant economy, local environment and parks, infrastructure, financial and legal liability, public health, and our international brand as one of the world’s most livable cities.”

The motion also suggests the City of Vancouver officially disagree with the National Energy Board’s refusal to consider the climate impacts of the project as relevant to the public’s interest.

Robertson’s motion states “the City of Vancouver views an increase in the extraction of fossil fuels intended for combustion, and the increase in greenhouse gases associated with this extraction and combustion, as posing a direct risk to the city and a result of sea-level rise and extreme weather impacts associated with anthropogenic climate change.”

The motion also voices concerns around the lack of appropriate emergency preparedness and the question of financial loss to local residents and businesses in the event of a spill.

City council is hosting a public hearing on the motion Wednesday December 18th. So far no members of the public have registered to speak at Wednesday’s city council hearing.

In 2007 a construction crew damaged the Trans Mountain pipeline spilling nearly 250,000 litres of oil into a local residential neighbourhood and the Burrard Inlet. At least 50 homes were evacuated.

If approved, the expansion could be in operation as early as 2017.