Notley vs. Kenney on how to deal with Alberta’s 167,000 inactive and abandoned oil and gas wells

NDP promises to implement clean-up timelines and clamp down on liability dumping, while UCP vows a ‘rapid acceleration of approvals’ for new drilling

What’s less certain is when all these wells are going to be cleaned up.

According to the Government of Alberta, there are an estimated 343,000 wells in this province. Half of those — roughly 50 per cent — are no longer active.

The government estimates 77,000 wells have been plugged — known in the industry as “abandoning” — and another 90,000 are sitting inactive. Those inactive wells are not yet plugged, and neither category has been reclaimed.

The vast majority of these are wells that still have a rightful owner who is supposed to pay for their clean up.

But in Alberta, there’s currently no requirement as to when they do that — in theory, a company could leave a well unreclaimed, indefinitely.

As for the hope that inactive wells are just temporarily idle, and might one day be put back into production, a paper from the University of Calgary predicts that “most inactive wells will likely never produce oil or gas again.”

With estimates published last year that put the total price tag on cleaning up Alberta’s wells at $100 billion, the issue is on the minds of many Albertans — as well as politicians — as Albertans get ready to head to the polls on April 16.

We took a look at what Alberta’s two major parties have to say about the province’s well-liability issues.

The NDP’s platform, released on Sunday, promises to implement timelines for reclamation of oil and gas sites, saying it “will implement clear timelines for when companies need to clean up their abandoned oil and gas wells and require them to justify delays in reclaiming sites.”

States like Texas, North Dakota, Alabama and Nevada have timelines in place to ensure oil and gas companies clean up their sites in a set amount of time. According to a report by Lucija Muehlenbachs, an associate professor of economics at the University of Calgary, “in the U.S., the time limit on suspension ranges from six to 300 months.”

The UCP platform, on the other hand, makes no mention of timelines, other than to note that it will speed up the approval of new well sites.

On Tuesday, Kenney stood in front of a pumpjack and a herd of cattle in Turner Valley and told reporters there would be a “rapid acceleration of approvals,” noting the UCP would “establish legislated benchmarks for approval times” on new wells, but did not specify if timelines would be imposed on cleanup of the hundreds of thousands of old ones.

The party’s platform does note that a UCP government would “increase the rate at which wells that will not be used again are officially ‘abandoned,’ ” though it remains unclear what this might entail.

Alberta’s current system relies on a cost-benefit analysis for the company. The company is required to pay rent to landowners when a site sits unreclaimed on their land. Once the company obtains a reclamation certificate, that obligation is over.

The trouble is, many companies have simply stopped paying rent to landowners, forcing the government to step in and pay it for them. The Narwhal reported earlier this year that government payments to landowners on behalf of delinquent companies are up 840 per cent since 2010.

In the meantime, inactive wells languish on the landscape, posing risks for soil and water contamination, release of greenhouse gases, air pollution or explosions.

The UCP has two specific ideas for incentivizing reclamation, though they both come in the form of requests to the federal government.

First, the party says it will ask the federal government to provide tax incentives and “financial support,” including what they call “green flow-through shares.” A flow-through share would apparently allow an investor to purchase shares that would pay for reclamation, then claim the cost as a federal tax deduction.

The UCP also plans to “urge the federal government to establish alternative financial vehicles that focus on environmental reclamation in the oil and gas industry, such as adapting Qualifying Environmental Trusts (QET) to include well decommissioning costs.” Essentially, this would allow companies to claim a federal tax deduction for any money set aside for future reclamation.

The NDP does not specify any tax incentives it would propose the federal government make for this purpose.

An end to sloughing off liabilities?

The National Observer reported last fall that the Alberta Energy Regulator had privately estimated the cleanup costs of oil and gas wells in the province to be $100 billion.

Many of those liabilities are traded around like sports cards, in what The Globe and Mail described as a “brisk trade in junk assets.”

There have long been concerns with the way companies are able to sloughing off their liabilities to financially precarious companies, who then may in turn go bankrupt and leave taxpayers with the bill.

The NDP is proposing a new way to evaluate a company’s viability prior to approving transfer of assets (and liabilities). It says it will “implement new corporate health measures on asset sales to prevent liability dumping as we continue to work with industry.”

Currently, the regulator relies on what’s called a liability management rating system. In this system, a company’s assets (essentially an estimate of the money it makes from oil and gas production) are measured against its liabilities (the cost to seal and clean up all its infrastructure) to establish a ratio. If the company’s ratio of assets to liabilities is less than one, it must pay a deposit on cleanup. As The Narwhal reported last year, this system has been found to be dramatically exaggerating assets and underestimating liabilities.

A corporate health tool would, in theory, take into account more parameters than the current system.

The UCP makes no mention of a corporate health tool, saying only that  it will “work jointly with the AER and industry to overhaul the liability management framework in Alberta, ensuring liabilities are covered without unduly discouraging new investment.”

Implications for the long-term

Everyone agrees — Alberta has too many inactive and unreclaimed wells, and there’s a potential for disaster if something isn’t done, and soon.

Much has been made of the importance of getting more wells through the reclamation phase. Once a well is certified as reclaimed, it removes the liability from a company’s balance books. At least on paper, it looks like the problem has been solved.

However, concerns have been raised about whether the rush to issue reclamation certificates has been leading to subpar work — and whether that has long-term implications for the Alberta landscape.

Under Alberta regulations, companies have a responsibility to restore sites to something known as “equivalent land capability” — which means the land should be just as productive, ecologically or agriculturally, after reclamation as it was before the well was drilled.

The Narwhal reported last fall that a Government of Alberta pilot project found that the vast majority of certified reclaimed sites studied were not meeting the government’s own criteria — noting that certified reclaimed wells were, in general, in poorer condition than nearby references sites.

Farmers and landowners have told The Narwhal that they have long noticed that many sites are more likely to host invasive species and less productive crops.

On reclamation, the UCP says it will “streamline the process for well and facility abandonment and environmental reclamation to reduce costs.”

As The Narwhal reported last week, previous streamlining efforts have led to a regulatory system in which an inspector visits less than three per cent of sites that receive reclamation certificates, which has led some to refer to the Alberta Energy Regulator as a “bingo-dauber agency.”

On Tuesday, Kenney announced he would commit to a review of the Alberta Energy Regulator within 180 days of taking office, to “identify efficiencies.” It’s no secret that the UCP is committed to cutting red tape.

Albertans are left to wonder how the red-tape reductions would impact the landscape itself.

Both parties are eager to win the favour of a populace that is often portrayed as “defined by the health of our oil and gas industry.”

It remains to be seen how either party would ultimately deal with what’s been referred to as a “brewing disaster” here in Alberta.

Banner: Left: UCP leader Jason Kenney. Photo: Daily Xtra / Flickr. Right: Premier Rachel Notley. Photo: Premier of Alberta / Flickr
We hear it time and time again:
“These are the stories that need to be told and you are some of the only ones telling them,” John, a new member of The Narwhal, wrote in to say. 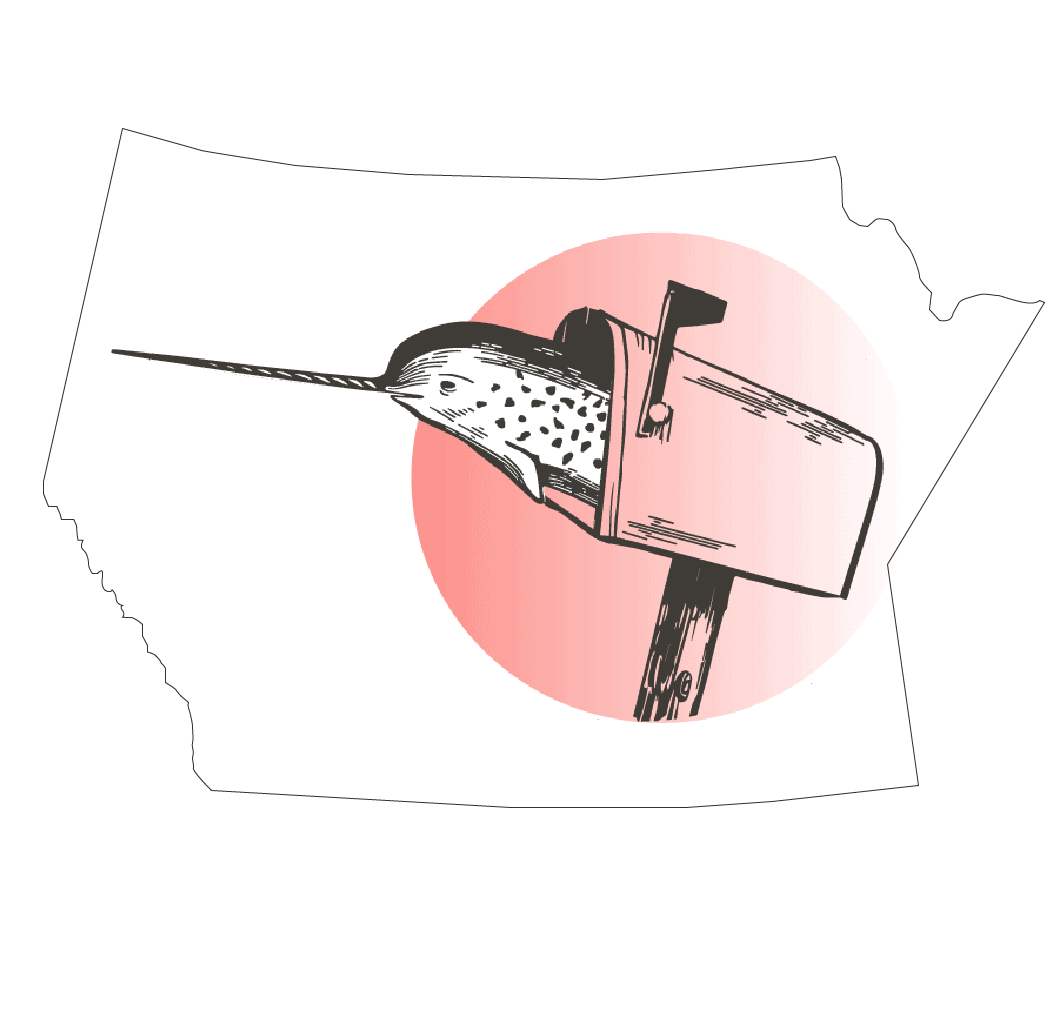