Companies in Alberta’s oilsands are scrambling to find a way to reclaim tens of thousands of kilometres of seismic lines cut into the boreal forest before regulations that mandate the recovery of endangered caribou habitat are implemented in late 2017.

But while crews experiment with planting black spruce in piles of dirt during minus-25 degree weather in a bid to repair the forest, the Alberta government continues to lease massive segments of the region for further exploration and still hasn’t mandated reclamation of seismic lines.

The controversy over caribou habitat and wolf culls in Alberta has stewed for years, but the issue of seismic lines has been largely overlooked. It’s these linear corridors cut through the forest (used to set off explosive charges to locate oil and gas deposits) that encourage predators like wolves to infiltrate what remains of fragmented caribou habitat.

“I don’t think a lot of people thought these seismic lines were a big deal,” said Scott Nielsen, an Alberta Biodiversity Conservation Chair and University of Alberta professor. “But … there are these cascading effects that you can’t anticipate.”

In a century of oil and gas development, hundreds of thousands of kilometres of these wolf freeways have been cut through Alberta’s forest. In one section of the Lower Athabasca region alone, south of Fort McMurray and extending out to Cold Lake, there are 53,000 kilometres of seismic lines.

“We still face the legacy of a tremendous amount of linear disturbances from the initial phases of exploration in the oilsands,” Nielsen said. “So it’s become a major conservation concern — or crisis — really.”

“Trying to recover things after they’ve happened is a heck of a lot harder than preventing habitat disturbance in the first place,” Nielsen said.

Some industry players are already voluntarily putting their minds to finding a way to piece the fragmented forest back together — even though restoration costs roughly $10,000 per kilometre.

“With caribou being listed [as endangered] and these areas being defined as critical habitat — that’s why there’s a bit of a mad rush to deal with the legacy of disturbances that we have,” Nielsen said.

Companies Push Ahead with Restoration Despite Lack of Government Requirement

Devon Energy, an oilsands company involved in seismic line restoration since 2011, is trying to make it harder for wolves to move around in caribou ranges.

“Seismic lines, not just seismic lines but roads and trails out in northern Alberta, make it easier for wolves to travel and hunt more efficiently,” Amit Saxena, senior lands and biodiversity manger with Devon, told DeSmog Canada. “They are increasing the spatial overlap between wolves and caribou, more than pre-disturbance levels.”

Saxena said while most companies are doing what they can to ensure new seismic lines come with a lighter footprint — by reducing their width and straightness — there is still a lot of work to do to inhibit wolf movement on the thousands of kilometres of legacy lines crisscrossing the province.

“Sometimes we actually put up wooden or snow fences at 500 metre intervals along the line, and sometimes we’ll do log rollback and brush clearing, making big piles,” he said. “That not only impacts wolf movement on the line but also human movement on the line so that limits the amount of ATVs and quads that go down those lines that will ultimately negatively impact the recovery of the line.”

Devon is working toward the federal government’s target of 65 per cent undisturbed habitat in caribou ranges and prioritizes line recovery based on their habitat value for caribou. The company is also working to offset disturbance in new ranges with conservation in others.

But Saxena pointed out that since there is “no carte blanche requirement” from the province for seismic line restoration, companies are trying to find ways to balance the restoration with other priorities.

“We have to be realistic about it also,” Saxena said. “Industry priorities do play a role in there.” 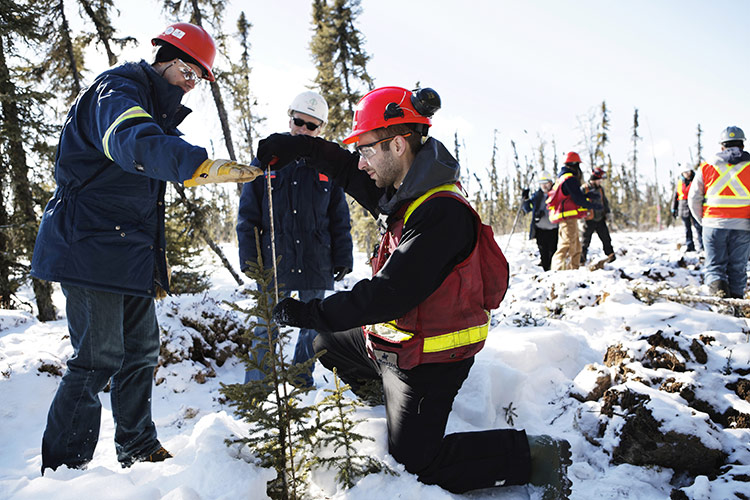 “We’re looking at an area nobody is currently active in. There are no oilsands leases within that area and what we’re testing is how can we restore [seismic lines] faster, what are the appropriate treatments, and what are the tactical plans specifically for managing forest fragmentation from seismic lines,” Geekie said.

Geekie said Nexen, along with other oilsands companies like Statoil, Shell and ConocoPhillips, are working on 390 kilometres of seismic lines throughout the Algar region.

Alberta Environment and Sustainable Resource Development (ESRD) is currently formulating the province’s caribou recovery plan, according to public affairs officer Duncan MacDonnell — although it’s too early to tell what role seismic line restoration will play in the plan.

“We must have caribou recovery plans ready to go by the end of 2017,” MacDonnell said. “It’s our responsibility to meet those plans according to the [federal] criteria.”

None of the provinces have filed their caribou recovery plans yet, he said, adding the variety of caribou ranges in Alberta alone has contributed to the delays in the draft plan’s release.

“How far [ESRD goes] in terms of restoration schedules or plans, we have no idea yet,” MacDonnell said.

He added ESRD is carrying out a wolf cull in the Little Smoky and A La Peche caribou ranges as an interim measure while the province prepares its recovery plans. Those plans are expected to include some restriction on new development in caribou ranges. 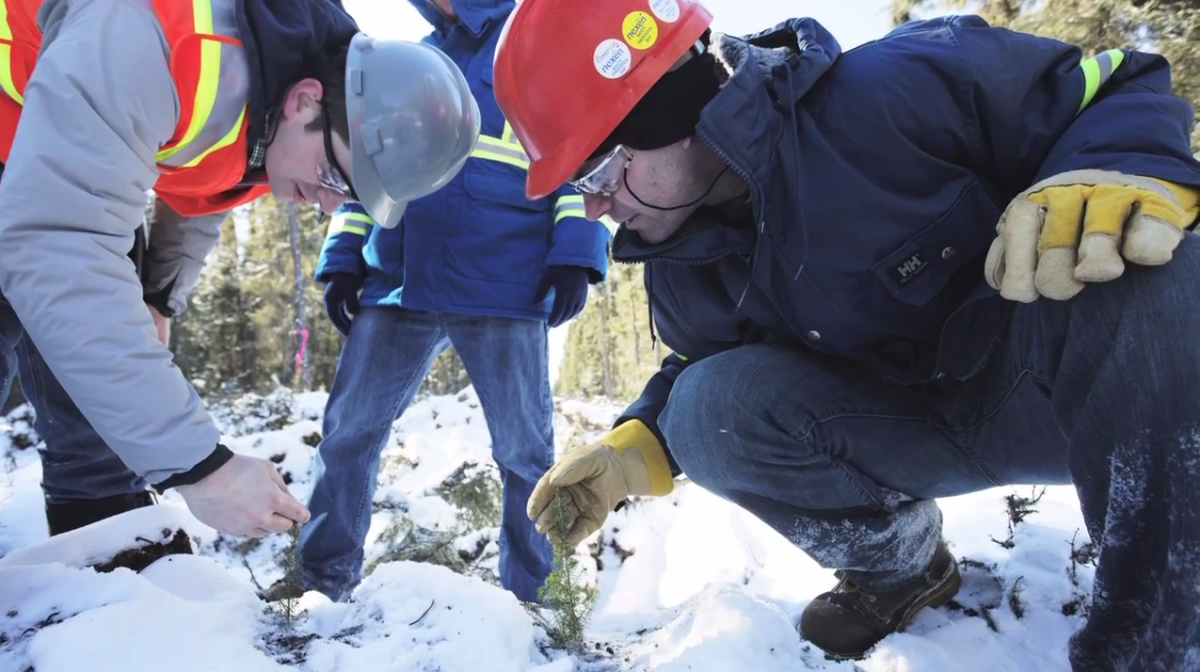 Yet the Alberta government’s recent sale of energy leases in caribou range has onlookers concerned not enough is being done to protect caribou habitat despite government promises.

Carolyn Campbell from the Alberta Wilderness Association said the government is “sending mixed messages” when it comes to caribou recovery.

In early March, the province came under fire for putting 21,000 hectares of energy leases in caribou habitat up for auction. Campbell said the day after her organization issued a news release on the auction, the government quietly announced the sale would be delayed.

Since then, several new small lease sales in that range have been announced.

“The problem with new leasing is it creates new rights holders — energy companies — who have a time limit to prove up those leases and under weak rules that enables them to put down new well-sites, new roads, new pipeline infrastructure.”

Campbell said new energy lease sales continue while the government is perpetually delaying the release of range-specific recovery plans. She said Alberta initially committed to releasing the first plan, for the Little Smoky and A La Peche herds, in 2014.

“Time is running out for these caribou. It would be pretty inappropriate to try to run the clock out to 2017,” she said.

She added the current rules for habitat disruption are “unacceptably weak for an endangered species” even when paired with recent efforts to restore disturbed land.

“Even though some companies are getting interested in reclamation, the net effect with all the new leases and activity is ongoing degradation,” Campbell said.

“New lease sales should be totally deferred until there are strong range plans in effect.”