The National Energy Board (NEB) ordered high-pressure testing of a segment of Enbridge’s Line 9 pipeline before the line, a west-to-east oil pipeline, can begin operating according to a press release issued Thursday.

“Before Line 9B becomes operational, hydrostatic testing results of three segments of the pipeline must be provided to and approved by the NEB,” the National Energy Board — Canada’s federal pipeline regulator — said.

Enbridge requested permission to reverse the flow of a 639-kilometre portion of the Line 9B pipeline between North Westover, Ontario and Montreal. Line 9B is part of the larger Line 9, which Enbridge hopes will carry diluted bitumen from the Alberta oilsands to Eastern Canada.

Community groups, particularly in Quebec, have long requested the high-pressure, hydrostatic test. A hydrotest or hydrostatic test is a commonly used method of determining if a pipeline can operate safely at its expected operating pressure. Recently a number of groups demanded the NEB explain why it would not order a hydrotest of Line 9. 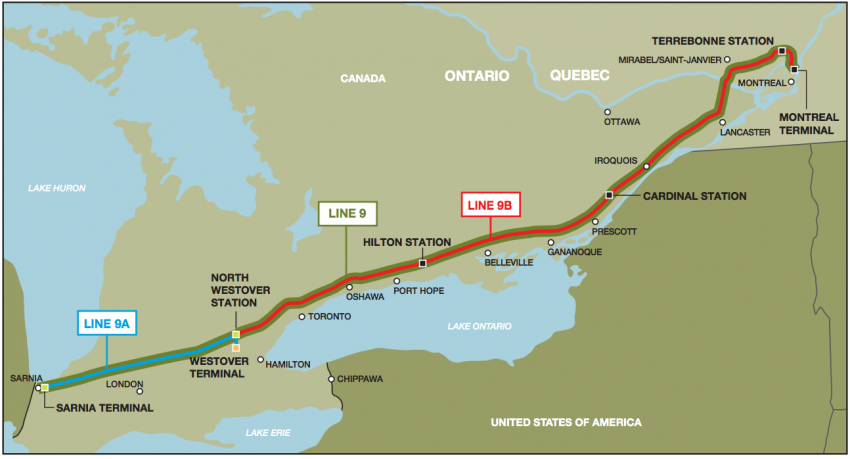 The NEB’s recent announcement appears to be in response to public concern.

The public has expressed concern over the age of the pipeline, its out-of-date design features and the possible effects of transporting diluted oilsands (also called tarsands) bitumen on the pipeline’s integrity.

The entire pipeline will not be hydrostatically tested. Three small sections of the pipeline have been selected for testing by the NEB. In Ontario, the sections between Kingston and Brockville and around Hilton will be tested. One section in Mirabel, Quebec near Montreal will also undergo a hydrotest.

Little detail is given as to why these three sections were chosen for the safety test.

“The number and location of the segments to be tested were identified by NEB professional engineers to provide the best results to validate existing data. The learnings gained will be applied, as appropriate, to the entire pipeline,” the NEB stated.

The NEB also gave the go-ahead or “leave to open” for the 39-year old pipeline to begin pumping oil to Montreal via southern Ontario. Enbridge must comply with the regulator’s conditions first.

“Enbridge is granted leave to open the North Westover ‘B’, Hilton ‘A’, Cardinal ‘A’ and Montreal ‘A’ facilities for the transmission of crude oil,” states an NEB regulatory order dated June 18th. The “facilities” are the pipeline’s pumping stations.

If Enbridge meets the board’s conditions, the Calgary-based pipeline company is free to put Line 9 back into operation despite an unresolved First Nation legal challenge against the project.  The Chippewas of the Thames or Deshkaan Ziibing in the Anishinaabe language had their first day in federal court this week.

"Canada has never consulted us on this project and it's their constitutional obligation to do so. They can't appoint a third party. It should be a nation-to-nation discussion," Myeengun Henry, Deshkaan Ziibing band councilor, told VICE.

The southwestern Ontario First Nation argues in their case before the Federal Court of Appeal the Line 9 project could negatively impact their constitutionally protected aboriginal and treaty rights. The federal government has the legal duty to consult with First Nations, Metis, and Inuit when projects may infringe upon their rights.

No consultations between the federal government and any of the First Nations along Line 9 have taken place to date.

Deshkaan Ziibing asked the NEB earlier this month to delay Line 9’s start up until their legal challenge had reached its conclusion.

“Chippewa of the Thames First Nation is requesting they be granted a stay until after the issue is heard in court. If the NEB moves forward before the legal questions are settled, the legal process will hold no validity and the chance to properly consult and accommodate will be lost forever,” Ontario Regional Chief Stan Beardy said in defense of Deshkaan Ziibing’s request.

“The NEB can grant the stay order and avoid causing irreparable harm.”

How the Wet’suwet’en crisis could have played out differently

Amid escalating tensions and armed RCMP responses, leaders say Canada must abide by the ‘rule...