Officials with the Cariboo Regional District declared a local state of emergency Wednesday after millions of cubic metres of contaminated tailings water from the Mount Polley mine flooded Hazeltine Creek early Tuesday morning, spilling into Quesnel Lake. Water drinking and water use bans have been issued for Quesnel Lake, Polley Lake, Hazeltine Creek, Cariboo Creek, and the Quesnel and Cariboo River systems, up to the Fraser River, according to the B.C. Ministry of Energy and Mines.

The breach, caused by the collapse of a berm supporting a lake of mining waste that spanned four square kilometres, released an estimated 10 million cubic metres of water and slurry that contains toxic processing wastes including arsenic and mercury into salmon spawning and drinking waters.

The tailings pond at Mount Polley mine, operated by Imperial Metals, was used to dispose of 84,000 kilograms of arsenic, 10,000 kg of cadmium, 38,000kg of lead and 562 kg of mercury in 2013, according to company data released to Environment Canada.

Imperial Metals mines both gold and copper on Mount Polley.

A video released by the Cariboo Regional Discrict shows the scope and extent of the Mount Polley Mine tailings breach.

“I apologize for what happened,” Imperial Metals president Brian Kynoch told a press conference yesterday. “If you asked me two weeks ago if this could have happened, I would have said it couldn’t.”

Kynoch said the company can only speculate on the cause of the tailings pond failure and said an investigation is needed.

He said the quality of the tailings is “close to drinking water quality,” adding “there’s almost everything in it but at low levels…No mercury, very low arsenic and very low other metals.” 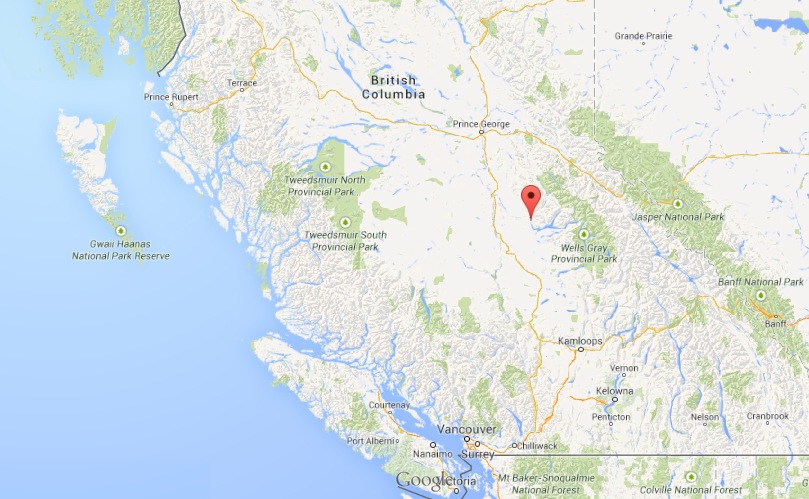 A screen shot from Google Maps shows the approximate location of the breach, near Likely, B.C.

The provincial Ministry of Environment in B.C. said it issued repeated warning to Imperial Metals about the Mount Polley tailings pond, according to the CBC. Ministry spokesperson Kim Franklin to the CBC her office had issued five warnings in May alone, the most recent concerning wastewater height in the pond.

Franklin also said the company requested permits to discharge increasing amounts of wastewater from the mine, which led to an independent overview in 2009.

Brian Olding, an environmental consultant who carried out the assessment, said the company allowed pond levels to get too high. “It means the water is rising so you have to build the walls of the tailings lagoon higher as you go,” Olding told the CBC.

In his report Olding said the company would need to eliminate 1.4 million cubic metres of water on an annual basis to maintain stable levels in its tailings facility.

Gerald MacBurney, a former foreman at the mine, said he warned management at Mount Polley about concerns he had with the tailings enclosure. He said Imperial Metals added five times the amount of water to the tailings pond than was originally planned for after the company decided to expand its operations.

Bill Bennett, B.C. minister of energy and mines, said the spill is a “serious incident that should not have happened.”

Bennett, who is in the area, said the company has been fairly compliant and safe throughout the years.

“From the air it’s a true disaster. It looks like a combination of a serious avalanche, [mixed with] millions and millions of litres of water having gone down a fairly steep grade. It’s changed the creek bottom from about six feet wide to about 150 metres wide, so that gives you some idea of the force of all of this water when it went down.”

“It’s unprecedented in Canada for this to happen,” he said.

Fairy Creek, the RCMP and a win for press freedom

A coalition of journalism organizations, including The Narwhal, has won a court victory over the...

Shaking up the stereotypes about Ontario’s outdoors

All Out Canada is filling a knowledge gap for racialized people who want to experience...