Terminating Site C Dam, Building Alternatives Could Save B.C. Over $1B: Economist

Karen Goodings avoids the Site C dam area on the Peace River because she finds it too heart-wrenching to look at the havoc caused by construction work, but, for the first time in years, she is now holding out hope that the $8.8-billion project will be scrapped.

“I want to see it permanently stopped and now I think there is enough information out there to talk about alternate sources of power that are more economical and less devastating,” said Goodings, a Peace River Regional District director.

Her optimism has been boosted by reports underlining financial uncertainties with Site C and emphasizing that B.C.’s power needs can be met by wind, geothermal and solar projects.

ICYMI: If Saskatchewan Can Build a Geothermal Power Plant, Why Can’t B.C.?

“I’ve not had a feeling that it was looking good for us until the Deloitte report came out, but now I think there is still an opportunity. Someone is going to listen,” she said.

A report by the auditing firm Deloitte LLP, requested by the B.C. Utilities Commission, looked at the economics of the controversial project and BC Hydro’s forecasts of electricity demand — and that information could be a game-changer, Goodings predicted.

Deloitte, which provides consulting services to government, found there were risks that the project could be delayed because of geotechnical and contractor problems and that, if a 2019 deadline for diverting the river was missed, it could add up to $1.8-billion to the cost.

Terminating #SiteC Dam, Building Alternatives Could Save BC Over $1B: Economist https://t.co/RwKoB8U5eX #bcpoli @SavePeaceValley

The estimates join a separate April analysis conducted by researchers with UBC’s Program on Water Governance that found stopping Site C by this past June would have saved B.C. between $500 million and $1.65 billion.

The Utilities Commission is preparing to produce a preliminary Site C report by September 20 and, following a series of round-the-province hearings, will provide final recommendations to government in November.

In addition to the Deloitte report, a submission to the commission by renowned hydroelectric consultant Robert McCullough, who was contracted by the Peace Valley Landowner Association and Peace Valley Environment Association, concluded that renewables could meet B.C.’s power needs at a much lower cost than Site C.

Calls for construction to be halted were buoyed Wednesday when McCullough, in a review of Deloitte’s facts and figures, concluded that terminating Site C and building a renewable portfolio of wind and geothermal would save between $700 million and $1.6 billion.

There is no need for Site C to act as a back-up battery for times when wind and solar are unavailable as the Williston Reservoir already has that capacity, the review found.

“It is not financially prudent to finish the Site C project,” McCullough said at a Vancouver news conference.

“The cost of building a renewable-based portfolio excluding Site C will be much less costly and still meets the province of B.C.’s clean energy goals.”

McCullough was supported by Harry Swain, former chairman of the Site C Joint Review Panel, who said the findings provide solid proof of what experts have been saying for years.

“B.C. does not need this power and, even if we did, we have lots of less expensive alternatives,” Swain said.

The PVLA and PVEA are calling for an immediate end to “reckless spending” on the dam and Goodings is keeping her fingers crossed that the BCUC has enough information to recommend scrapping the project.

Her only disappointment is that BCUC members have not been able to accept an invitation to tour the entire area and, instead were shown the construction site by BC Hydro representatives.

Goodings, who, with Hudson’s Hope Mayor Gwen Johansson, sent an invitation to Utilities Commission panellists to tour the area, said she wanted to show them the surrounding farmland, wildlife habitat and Indigenous sites and how, with the construction, the surrounding land sloughs off.

“We’re not only going to lose what’s under the water, but also the land around it,” she said. 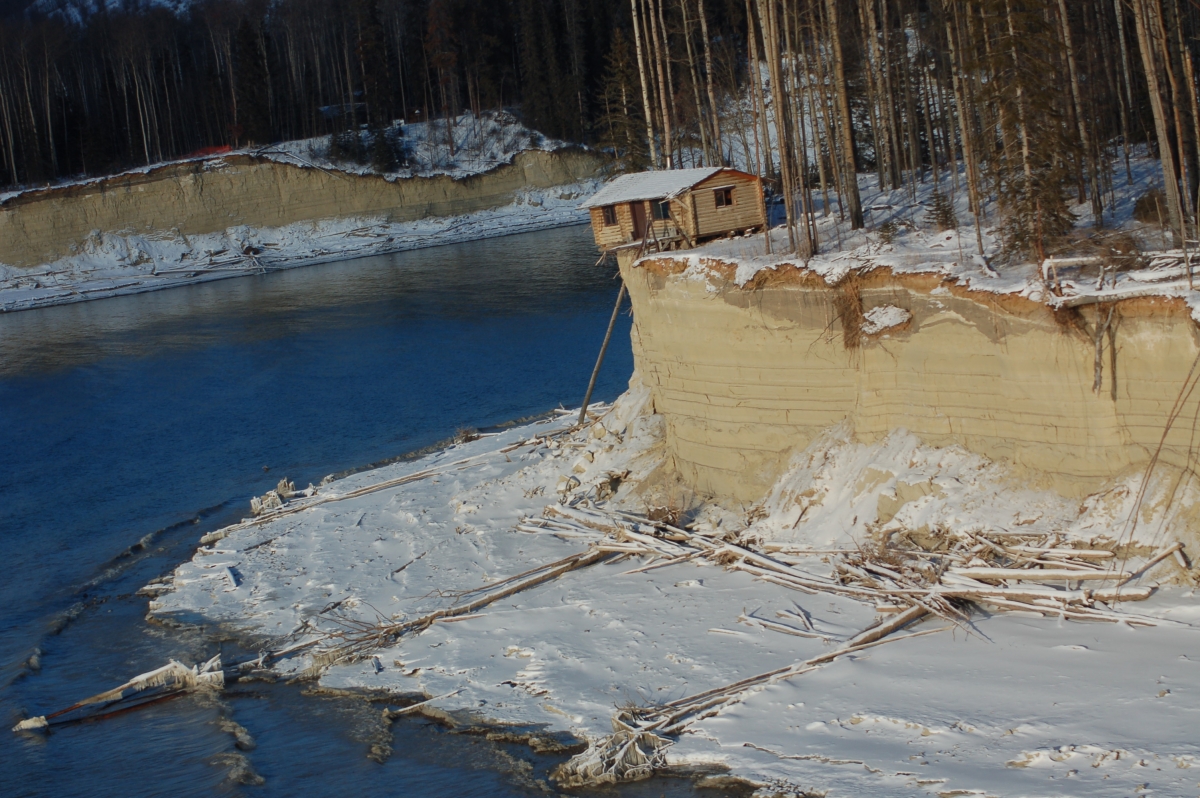 An abandoned cabin sits perched on the edge of a cliff created by unexpected sloughing along the banks of the Williston Reservoir, created by the W.A.C. Bennett Dam,  in 2008. Photo provided to DeSmog Canada by West Moberly First Nations Chief Roland Willson.

Goodings said, despite her disappointment, she understands the commission’s timelines are extremely tight.

Utilities Commission chairman David Morton said in an e-mailed statement that panel members and Deloitte representatives visited the construction site and the Highway 29 realignment area on August 10 and 11 and received a briefing from BC Hydro’s on-site team, but did not receive the invitation from Goodings and Johansson until later that month.

“This inquiry is working under an extremely tight timeline, so the panel was unable to schedule a second trip to the area,” Morton said.

The B.C. Utilities Commission is looking for feedback from as many British Columbians as possible during upcoming community and First Nations input sessions — including two in Fort St. John and one in Hudson’s Hope, he said.

Meanwhile, Goodings and her colleagues have invited Premier John Horgan and several ministers to come to the Peace River region, but have not yet had a reply.

“We were looking forward to sharing with BCUC a balanced view of the losses which have been minimized by BC Hydro throughout the joint review,” Goodings wrote in a letter to Horgan.

However, even if the ministers are not able to come to the Peace, area representatives are hoping to meet with them during the Union of B.C. Municipalities convention later this month, she said.