In the remote north-eastern corner of Alaska, just under 20-million acres have been set aside as a federal protected area since 1960. The Arctic National Wildlife Refuge has recently come under threat, however, with President Donald Trump’s Department of the Interior proposing lifting restrictions on seismic exploration.

The Arctic National Wildlife Refuge coastal plain has been described as America’s Serengeti, and is the year-round or migratory home to numerous species that are uniquely adapted to the conditions found within this rare expanse of undeveloped wilderness along the Arctic Ocean.

Over tens of thousands of years, both the Porcupine Caribou herd and the Gwich’in people have come to depend on the integrity of that coastal plain for their survival.

“It is a keystone in the ecosystems of the Arctic, and the heart that beats outside of the Gwich'in chest.”

Oil and gas lobbyists have had the Refuge in their sights from the outset. For decades now, for every push to open up the wildlife refuge to oil and gas development, multiple generations of Gwich’in have stood up to protect the land and the herd that has sustained their way of life.

Disturbance to the landscape can upset a delicate balance between the wildlife that makes its home on the coastal plain. 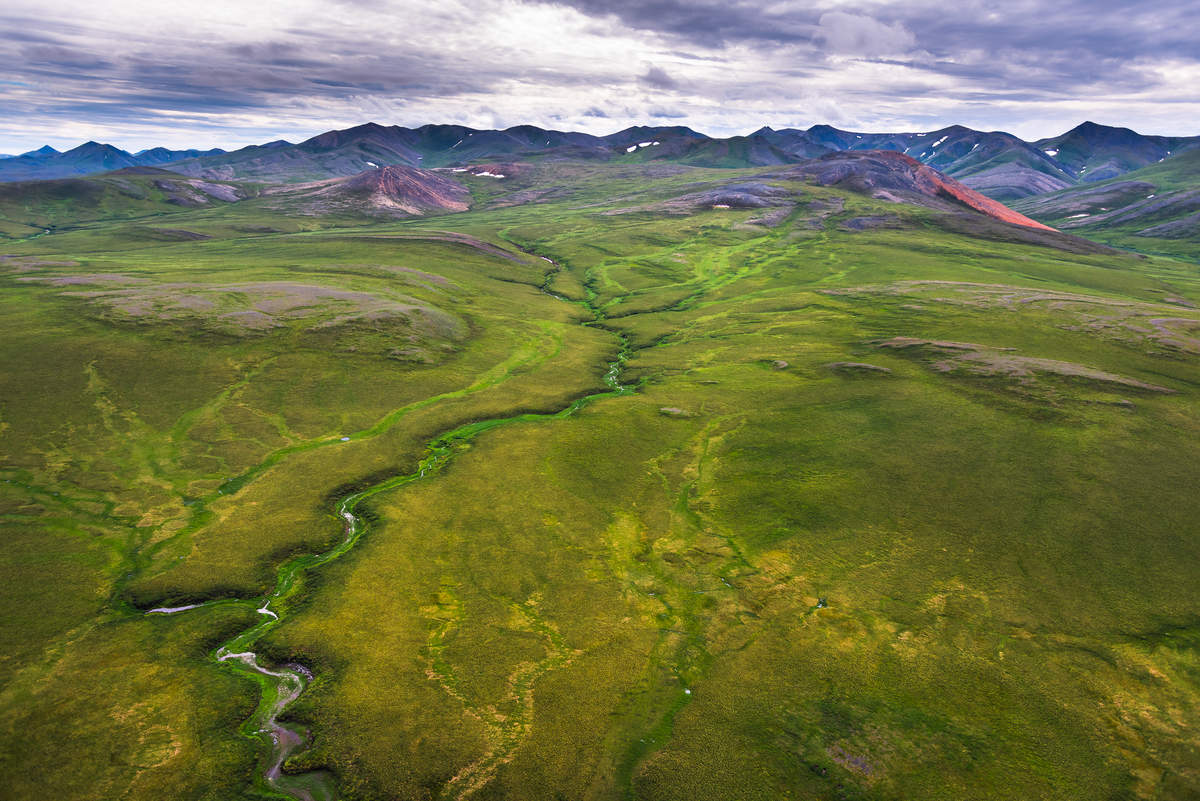 “In a miracle of phenology [the interaction of climate, habitat and plant/animal cycles], Porcupine caribou cows arrive at the coastal plain just as the first flush of spring growth provides a burst of nutrients to them, just as they all deliver their calves at once,” said Yukon Conservation Society energy analyst Sebastian Jones in an emailed response to questions from DeSmog Canada.

“In the first few critical days of a caribou calf’s life, predation is the main hazard. Until they have found their legs, they are easy prey to wolves and bears.”

To the west of the Arctic Refuge, high levels of industrial activity are already taking place, and to the south and east of the narrow coastal plain area where the caribou calving takes place, steep mountain ranges mean less nutrients and more predators.

“There is simply nowhere else suitable for the caribou to go,” said Jones.

There have been numerous victories and setbacks in what has been a sustained effort over that time, but for many, any sense of relief or optimism brought about by President Obama’s 2016 move to freeze arctic oil and gas exploration in the Arctic has now vanished.

President Trump’s 2018 Budget includes instructions to the Senate Committee on Energy and Natural Resources to raise an additional $1B over ten years. Alaska Senator Lisa Murkowski — Chair of the Committee — has used the opportunity to champion a renewed push to open the coastal plain to oil and gas exploration. Earlier this month Murkowski introduced legislation that would give a green light to exploration in the Refuge. Republicans have now taken Murkowski’s bill and folded it into their tax reform bill.

“There is palpable concern among the quiet people of our community of 250 people,” said Tizya-Tramm.

“I've even had children as young as 8 years old ask why this is happening and if we can talk with the President, and what they can do. It is hard to see the sincere concern in our youth’s eyes. I encourage them and tell them that we will beat this, as we must.”

Jones said that since the current proposal is exploratory in nature, the true scope and scale of potential activity in the area remains to be seen.

“It depends on what they find. If the feverish dreams of the oil men come true, it will be another Prudhoe Bay — decades of drilling, all-season roads, pipelines, and oil spills.”

For the Gwich’in, Tizya-Tramm says the development would mirror the expected impact on the caribou herd.

“Our entire existence will dwindle with any presence in their calving grounds, period.”

“People need to understand just how delicate this area is,” says Tizya-Tramm.

“Traditionally we stayed out of the Coastal Plains altogether. Tundra is a very sensitive and even seismic testing will scar the land with permanent trails. These caribou have been seen to purposefully stay far away from a soup can laying on the ground. Caribou populations have fallen exponentially in Alberta and other regions where there is development.”

Arctic cottongrass, mosses, other plants and lichens vital to the Porcupine Caribou can take decades to recover from industrial damage, sometimes taking decades to return.

“The picture that arises here, and well known to our people, is that nature is a fine-tuned system. And up in one of the harshest regions in the world, it is especially delicate like fine china. We cannot limit the options of animals that exist in the narrow opportunities afforded to them, especially one of the healthiest remaining herd of caribou left,” explains Tizya-Tramm

Murkowski and supporters have pitched fossil fuel exploration in the area as a quick solution to the American budget deficit, presenting minimal impacts within the coastal plain calving grounds of the Porcupine Caribou.

Murkowski tweeted in November in defense of changes in oil and gas development since ANWR was established.

The size of development pads has decreased by nearly 80% since the 1970s. New technologies have expanded the subsurface reach of the newest rigs by 4,000% over the same period. Many exploration wells are now built using ice roads and ice pads—leaving no impact to the tundra.

“Many exploration wells are now built using ice roads and ice pads — leaving no impact to the tundra,” she wrote.

Jones dismisses any notion of low-impact exploration or development in the area.

“This exploration is supposed to be restricted to winter on ice/snow roads and drill pads; here are multiple problems with this,” he says. “Drill rigs are massive and require multiple large loads, in turn requiring very robust roads. It is not a trivial exercise building ice roads on the tundra sufficient to deploy an oil rig. In recent years, consistent with global warming, it has become less common to have adequate snow to build winter roads, so it may not even be possible.”

Gwich’in Gearing Up for a Fight

While the momentum to open up the Arctic Refuge to development seems to be gaining, Gwich’in and supporters have been stepping up their activity as well.

The Yukon Branch of the Canadian Parks and Wilderness Society has launched a nationwide petition, lobbying Prime Minister Trudeau to speak up against development in the Arctic Refuge.

A delegation of Gwich’in and other Canadian officials, including Yukon MP Larry Bagnell travelled to Washington, DC earlier this month in the hopes of influencing senate votes on the issue. Upon returning, Bagnell spoke about the trip and raised the issue in the House of Commons.

For Tizya-Tramm and Gwich’in in both Canada and Alaska, the battle has been all-consuming.

“I have been working late into the night and weekends for over a month now simply trying to keep pace,” Tizta-Tramm said.

“This is a time to call upon all of our people and the strong partnerships we have forged over the years.”

“There we once again came together seeking guidance and unity. To be of one mind, one heart, so that we may speak with one voice.”

Matt Jacques is a journalist, photographer and social scientist living in Canada’s Yukon Territory. With a Ph.D. in experimental psychology…

For Raina, coming to The Narwhal was the perfect fit in her commitment to covering...

Local support for the open-pit mine grows, even as industrial projects and remote work camps...

‘Them plants are killing us’: inside a cross-border battle against cancer in Ontario’s rust belt