B.C. delays work to clean up Tulsequah Chief mine due to COVID-19

Northwest B.C. mine has been leaching contaminated water into salmon-producing river on Alaska border for more than six decades

By Matt Simmons (Local Journalism Initiative Reporter)
Share
The wall separating the pond from the Tulsequah River has eroded and wastewater now drains directly into the river. Photo: Colin Arisman / The Narwhal

In a remote corner of northwest B.C., an old mixed-metals mine has been leaching contaminated water into the largest tributary of the salmon-producing Taku River for more than 60 years.

In 2019, the B.C. government said it would have a final remediation and reclamation plan ready at the end of that year. But now, due to delays related to COVID-19, the province says the plan won’t be made public until the fall or later and on-the-ground work won’t start until next year at the earliest.

Salmon Beyond Borders campaign director Jill Weitz is disappointed by the delay but said the work has to be done right.

“Last year, we were all really excited,” Weitz told The Narwhal. “But given that this has been an issue for 60 years, there’s certainly no need to rush the process. It might take as long to clean up as it took to pollute.”

Teck-Cominco abandoned the mine in 1957 after operating it for seven years. Since then, and possibly before, contaminated water has been leaking directly into the watershed. In 2010, Chieftain Metals acquired the property and promised to reopen the mine and address the contaminated water. It failed on both fronts and went into receivership in 2016.

The Tulsequah Chief mine sits on the banks of the Tulsequah River, 10 kilometres from where it meets the Taku River, which flows into the Pacific near Juneau, Alaska. Last year’s government announcement was met with relief by campaigners on both sides of the border, who have been working for decades to get someone to take responsibility for the mess and clean it up.

“The Alaskans have been pissed off for years, and rightly so,” said Nikki Skuce, director of Northern Confluence, an initiative based out of Smithers that focuses on land use decisions in northern B.C. “The Taku River seems pretty remote to British Columbians, way up in the very northwest corner, but it’s not to the citizens of Juneau.”

The location of the abandoned Tulsequah Chief mine in relation to the Taku River watershed. Map: Carol Linnitt / The Narwhal

Last year, the province and the Taku River Tlingit First Nation selected a proponent to develop a remediation plan for the Tulsequah Chief mine.

The plan was developed by SRK Consulting and SNC-Lavalin, a Montreal-based engineering firm that faced criminal charges in 2018 and 2019 for its business operations in Libya and in June was ordered to pay the Canadian government $1.9 million for its role in a bid-rigging scheme in Quebec.

The final plan was submitted to the province in April and is currently being reviewed, Karemaker said. The province declined The Narwhal’s request to review the plan.

There were several reasons the report was late, Kent Karemaker, a spokesperson for the Ministry of Energy, Mines and Petroleum Resources, wrote in an email.

“Due to the complexity of the site, the lack of historical data to support current assessments and the remoteness of the location and associated logistics, the completion of the remediation and reclamation plan was significantly delayed,” he said. “Similarly, due to COVID-19, the anticipated progress on the receivership process was delayed.”

We back-country paddled to the Tulsequah Chief, B.C.’s most infamous abandoned mine

Before the province can commence work, receivership has to be finalized because the government needs the money Chieftain gave it in a bond to pay for the work.

Mines are required to post bonds with the government to cover the eventual costs of reclamation. The province currently sits on $1.6 billion in bonds to cover an estimated $2.8 billion in reclamation costs. When a mining company goes bust, taxpayers pay the difference.

The province has collected just over $1 million from Chieftain and estimates cleanup will cost $1.2 million. However, Chieftain’s unsuccessful attempts to treat the contaminated water cost $5 million, so the final cleanup costs will likely be much higher.

As for when receivership will be complete, Karemaker said that “given that this resides within the authority of the Ontario courts, the province is not at liberty to provide a firmer timeline, but anticipates a satisfactory outcome towards the fall.”

The pandemic has also delayed on-the-ground work. “COVID-19 presents a challenge for operationalizing field plans this season; however, B.C. is planning to undertake work in summer 2020 to support additional studies, which are needed to plan larger-scale remedial activities,” Karemaker said.

That work includes a LiDAR survey to support design work for reclamation plans. LiDAR, or light detection and ranging, uses a system of laser scanners and GPS on a plane or helicopter to acquire accurate topographical data. The data is used to create detailed 3D maps.

The government is also initiating an aquatics monitoring program to measure the alkalinity of the water and its impacts on aquatic life, as well as sample and study fish and other aquatic life. This is just at the planning stage with fieldwork set to start next year.

The last aquatic ecological risk assessment at the Tulsequah Chief mine was done by the Ministry of Environment and Climate Change Strategy in 2016, after it found that an earlier report by Chieftain Metals was insufficient. The ministry couldn’t complete the assessment due to challenging weather conditions but found that contaminants in the water near the mine were at levels that pose high risks to fish and other aquatic life.

The government will also be assessing the existing water treatment plant to determine if it could be rehabilitated. Chieftain operated the plant for less than a year in 2012 before shutting it down, citing high operational costs and technical difficulties. This work will be done remotely.

While preliminary work slowly gets underway, an estimated one million litres of contaminated water flows into the Tulsequah River every day, according to a 2016 report commissioned by Rivers Without Borders.

The water is contaminated due to acid rock drainage, which occurs when rock becomes oxidized and forms sulphuric acid, which leaches heavy metals out of the rock. Acid rock drainage lowers the pH level of the water, making it unsafe for humans and wildlife. The contaminated water includes copper and zinc, among other contaminants, at levels far exceeding safe standards.

Even just two drops of copper in an Olympic-sized swimming pool is enough to affect a salmon’s ability to smell. “That ability facilitates locating spawning grounds, finding food and mates, and detecting predators,” the report pointed out.

Zinc is toxic to fish. At the time of the report, zinc levels at the mine site were more than 2,000 times higher than legal standards. 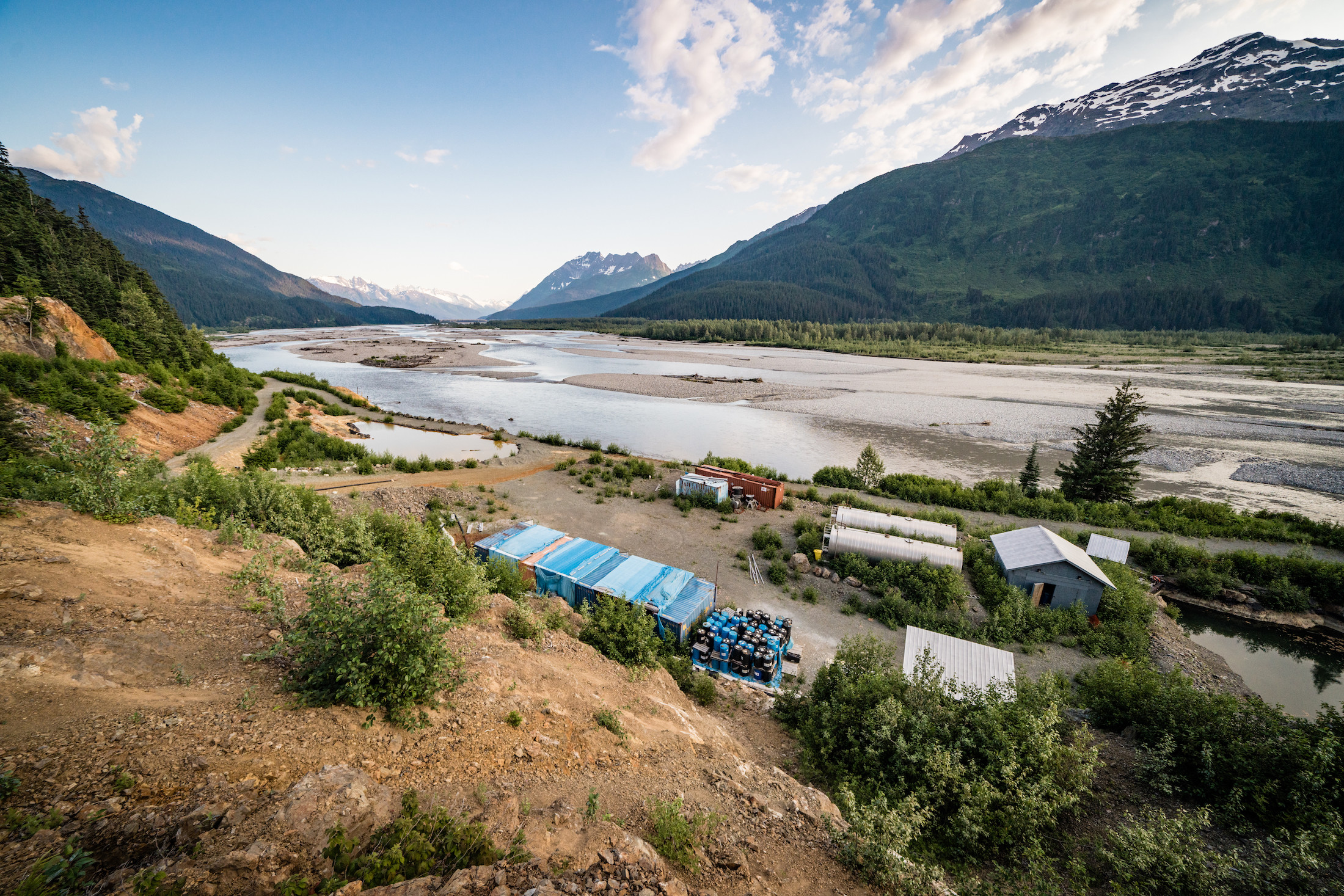 The abandoned Tulsequah Chief mine site is just meters from the Tulsequah River, a tributary of the salmon-rich Taku River. For six decades, B.C. has failed to address acid mine drainage at the mine site. Photo: Colin Arisman / The Narwhal

Skuce said the problems at the Tulsequah Chief point to deeper issues with mining in the province. She referred to Britannia Mine near Squamish, which cost taxpayers $46 million in reclamation costs and requires a further $3 million every year in perpetuity to monitor and treat water at the site.

“We need to make the polluter pay,” she said. “Right now there’s a $1.2-billion liability of what it’ll cost to do reclamation. Other jurisdictions like Alaska and Quebec require full mine reclamation bonds within the first three years. And that’s something that B.C. should do.”

Last year, the Environmental Law Centre and more than 30 mining advocacy and legal organizations called on the B.C. government to reform its mining laws. Suggested changes included ensuring companies are held legally liable for cleanup and setting up requirements for long-term independent analysis of water treatment systems. Even if those reforms are implemented, legacies like Tulsequah will remain a direct cost to taxpayers.

“We need to be treating this water at the Tulsequah site forever,” Skuce said. “But it’s remote and hard to get to, with super-challenging weather conditions.”

Accessing such a remote site for monitoring and treatment is expensive — and that’s not going to change.

On the Alaska side of the border, the Tulsequah Chief is viewed as a frightening example of what can happen to transboundary watersheds if mines are not properly regulated. With numerous larger mines proposed or under construction along the Alaska border, like the proposed KSM mine, near Stewart, B.C., the potential environmental impacts on fish, wildlife and tourism are staggering.

“[Tulsequah] is this little thing, in my opinion, in the shadows of much more daunting problems,” Weitz said. Her view is that the eventual cleanup of the Tulsequah Chief mine can set an example for other B.C. mines — or serve as a warning.

Banner: The wall separating the pond from the Tulsequah River has eroded and wastewater now drains directly into the river. Photo: Colin Arisman / The Narwhal