Canada can reduce its carbon footprint by 90 per cent, play its part in the fight against climate change and grow its economy at the same time according to a recent report by the United Nations Sustainable Development Solutions Network.

“This is a really important piece of analysis for Canada. It shows that we can cut our carbon pollution dramatically by 2050, making a strong contribution to tackling climate change, while growing our economy by over 200 per cent,” Clare Demerse, a senior policy advisor at Clean Energy Canada says.

By powering transportation, buildings and electricity with largely renewable energy (water-power, wind, solar) and biofuels and applying wide spread use of greenhouse gas (GHG) capturing technologies such as carbon capture and storage (CCS) in the oil and gas sector the report argues Canada can cut its GHG emissions production by 90 per cent by 2050 based on 2010 levels.

The catch is none of this can happen unless Canada implements policies effectively regulating the production of GHG emissions, something the federal government has so far been unable to do.

“Many of the major changes described in the Canadian decarbonization pathway will not occur without strong policy signals, which will require public support and in many cases will be driven by public pressure,” the UN network concludes.

Electrification of the Economy Is the Key to Reducing GHG Emissions

Reducing GHG emissions of transportation and buildings sectors by 97 per cent and 96 per cent respectively are the “two of the core foundations of the Canadian deep decarbonization pathway.” The key to reaching these targets is a substantial shift to renewable energy. 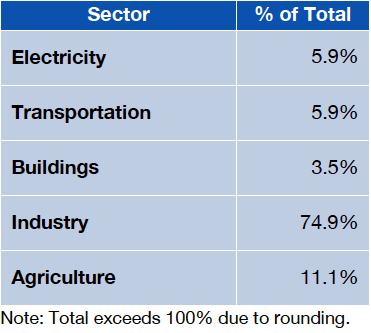 “Decarbonizing electricity production is essential, since it is a precondition to reducing emissions throughout the rest of the economy through electrification,” the report states.

Oil consumption for transportation will need to plummet with the majority of Canadian vehicles running off of biofuels, hydrogen or electricity in the 90 per cent GHG emissions reduction scenario. The report sees a slight shift to mass transit (trains, buses) over personal vehicles and a large transformation from trucks to trains for freight. 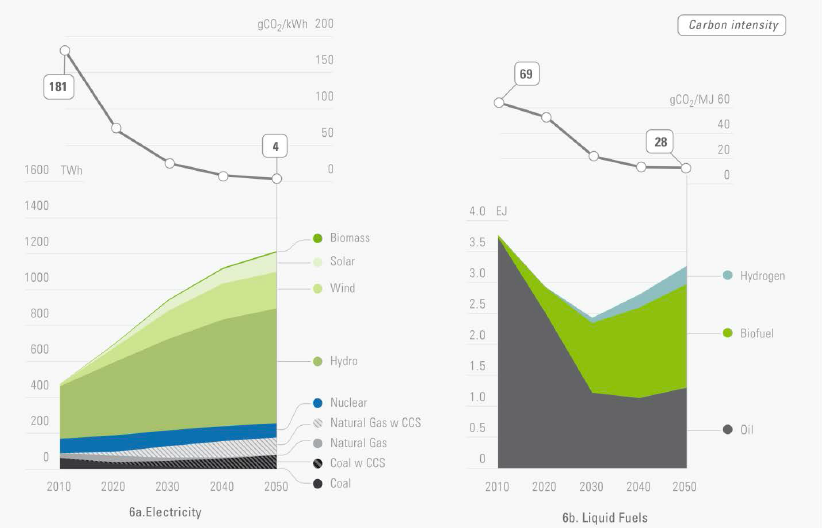 Electricity production (left) and fuel consumption (right) by source by 2050.

“The results the modelers presented are one way to hit the target they were given, but they’re not a prescription. As they point out, Canadians and our governments will need to make policy choices about what kind of low-carbon path makes the most sense for us,” Demerse told DeSmog Canada.

Report Surprisingly Projects Oil and Gas Output Will Double by 2050

The report assumes Canada can remain an oil and gas “energy superpower” in a world that has gone nearly zero-carbon. The report predicts Canadian oil and gas production will double by 2050 as well.

“If Canada is able to power its cars and buildings with virtually zero fossil fuels by 2050, why wouldn’t the rest of the world want to do the same? If global demand for oil drops, oil prices will drop too — and then we would see far lower production than the oilsands industry is counting on today,” Demerse told DeSmog Canada.

To keep the oil and gas sector in play in a near zero-carbon scenario the report recommends Canada employ widespread use of technologies such as carbon capture and storage (CCS) in the sector. CCS captures carbon emissions, and converts them into a dense fuel that can be transported to sites below ground for storage.

“Why would companies adopt expensive CCS (carbon capture and storage) technology if at the moment they can dump waste into our atmosphere for free?” Jaccard says.

The authors of the report admit CCS is not “commercially viable” in Canada at the moment given “current climate policy stringency.” The low price on carbon and lack of regulations on GHG emissions in the Canadian oil and gas sector provide very little financial incentive for companies to invest in expensive technologies that decrease the carbon footprints of their operations.

“Until there are regulations on carbon in Canada technologies like CCS are going nowhere,” Jaccard told DeSmog Canada.

Unclear If the Oilsands Have A Place In A Decarbonized Canada

The UN network behind the report is unable or unwilling to say if the oilsands (also called tar sands) industry, the fastest growing source of GHG emissions in Canada, has a future in a low carbon Canada. The report cites “literature conflicts on whether production from the oil sands can be cost-effective in a deep decarbonization scenario.”

The province's decision increases risks to some of Alberta’s least protected natural regions, which are...

Our young Narwhal fans blew us away with their drawings of the famed unicorn of...