A new fracked gas export facility near Squamish would produce the equivalent carbon emissions of putting 170,000 new cars on the roads each year. The project — owned by an Indonesian billionaire — also raises safety concerns about the transport of flammable gas through a heavily populated region

By Sarah Cox
Share
B.C. LNG may help countries reduce their reliance on coal, but the growing industry threatens the province’s ability to meet its climate commitments. Photo: Shutterstock

Woodfibre LNG, a liquefied natural gas export facility planned for Howe Sound on the southern B.C. coast, is a big step closer to construction following receipt of a key permit from the B.C. Oil and Gas Commission on Tuesday.

The eight-page permit outlines the requirements the facility, owned by Indonesian billionaire Sukanto Tanoto, must meet for design, construction and operation — including a tsunami hazard study, a flaring notification plan and reports on emissions such as noise and black smoke.

The waters of the 44-kilometre long Howe Sound fjord, flanked by the Coast Mountains, are home to fragile glass sponge reefs, salmon, herring, porpoises and whales. Long polluted by industries on its shores, including a large copper mine, Howe Sound was returning to life after extensive rehabilitation efforts when Woodfibre and other new industrial developments were proposed.

Woodfibre LNG president David Keane called the permit “a positive step forward” for the project, which would see LNG offloaded from floating storage tanks near Squamish to LNG carriers as long as six football fields.

The LNG carriers would traverse the island-studded waterways of Howe Sound three to four times a month, accompanied by three tugboats and two pilots familiar with B.C.’s coast, according to the company.

“This permit is a large piece of our puzzle, and with it in place, we are working towards a final investment decision to proceed with this project this summer,” Keane said Wednesday in a news release.

According to the Pembina Institute, carbon emissions from the Woodfibre LNG project would add the equivalent of 170,000 new cars to B.C. roads each year, while the project would use the same amount of freshwater annually as 5,500 households.

Gas for Woodfibre LNG will be fracked in northeast B.C. and sent via pipeline to the coast.

Eoin Finn, a spokesperson for the Howe Sound group My Sea to Sky, said he is concerned that the oil and gas commission’s permit approves the use of two aging LNG tankers that Woodfibre plans to bring from Singapore for floating LNG storage.

According to the company, the permanently moored tankers will be “refurbished.”

The 40-year-old tankers are “way past their best before date,” said Finn, a former partner with the global accounting firm KPMG who resides on Bowyer Island in Howe Sound.

“They would normally have been scrapped by now,” Finn told The Narwhal. “They’re amongst the oldest two per cent of the world’s 400-strong LNG tanker fleet. Both have been in accidents and have been patched up.”

Finn said new LNG tankers have thick hulls but old ones can develop weak spots and rust can affect the stability of the hull and joints.

“If you get a leak from the tanks onto marine steel at minus 160 [degrees Celsius — the temperature to which gas is cooled in the liquefaction process] marine steel becomes really brittle and you could hit that hull with a hammer and break it into bits.”

Finn, who holds a PhD in physical chemistry, said the U.S. does not allow LNG plants or tankers within 3.5 kilometres of significant populated areas.

“That cargo is full of flammable gas with the thermal equivalent of 72 Hiroshima-sized nuclear bombs aboard.”

Carriers picking up Woodfibre LNG will intersect with four ferry crossings in waterways with both freighter and recreational boat traffic, Finn pointed out.

If a collision occurs and a loaded LNG tanker develops a hole, everything within 500 metres will be frozen, Finn said. Should a tanker carrying LNG catch fire, he said people up to 3.5 kilometres away will suffer severe burns.

Woodfibre LNG is a member of the Society of International Gas Tanker and Terminal Operators, an industry organization that has promoted best practices in the LNG shipping and terminal industries for the past 40 years.

Woodfibre LNG did not respond to a request for comment from The Narwhal by our deadline. 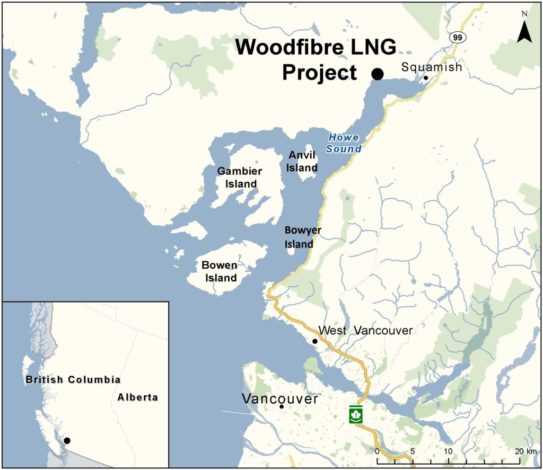 The location of the Woodfibre LNG project in Howe Sound. Map: The Future of Howe Sound Society

Orcas and other at-risk species could suffer from noise, flaring

Finn said he is also concerned the Oil and Gas Commission permit allows the LNG facility to emit noise, light and black smoke and flares.

“This ruling gives them permission to flare any time they want,” Finn said. “A flare is not my definition of a sightly object in the primary tourist route to Whistler.”

The Woodfibre LNG project, on the site of a former pulp and paper mill seven kilometres southwest of Squamish, has already received environmental assessment approvals from the B.C. and federal governments.

Orca whales, grey whales, Pacific white-sided dolphins and harbour porpoises will be subject to potential sensory disturbances from the project, according to Woodfibre’s executive summary for the Canadian Environmental Assessment Agency.

The Oil and Gas Commission permit is the first major authorization for Woodfibre LNG issued by B.C.’s NDP government, which green-lighted the much larger LNG Canada project last year.

Woodfibre LNG, which employs NDP operative and former NDP cabinet minister Moe Sihota as a lobbyist, is a private company owned by Pacific Oil and Gas, which is part of the Singapore- based Royal Golden Eagle group of companies owned by Tanoto. Forbes pegs Tanoto’s personal wealth at US $1.4 billion.

LNG Canada will produce 9.6 megatonnes of carbon per year by 2050, according to the Pembina Institute. B.C.’s legislated target for total carbon pollution is 13 megatonnes a year by 2050.

“We’ve always known that this was coming … the challenge of meeting our climate commitments with this project and LNG Canada’s first phase is coming to fruition,” Wu told The Narwhal.

The B.C. government has said it will devise a plan within the next two years to enable B.C. to meet its 2030 carbon reduction goals. The government’s current plan is a blueprint for meeting only 75 per cent of B.C.’s targets.

“We do still need to see that,” Wu said. “And we have a lot of moving LNG proposals out there. So we need to see how the government will be able to get us on a path to fully meet our climate commitments and reconcile that with LNG projects that are knocking on our door.”

About 10 LNG facilities are still proposed for B.C., according to the group LNG in Northern B.C. As of January 2019, plans for seven additional LNG facilities had been cancelled.

Global LNG investments are “on a collision course” with the goals of the Paris climate change accord and Canada is one of the world’s worst offenders, according to the report.

Like the LNG Canada project, Woodfibre LNG will benefit from a host of public subsidies and electricity rates far lower than what residential BC Hydro customers pay.

Woodfibre has also signed an agreement with the Squamish First Nation that could see the nation receiving $225 million in benefits over 40 years.

Last week, Woodfibre announced it had signed an LNG sales and purchase agreement with BP Gas Marketing, with first delivery expected in 2023.

The National Energy Board issued a 40-year export licence for Woodfibre LNG in June 2017, extending the project’s original 25-year licence by 15 years.

Banner: B.C. LNG may help countries reduce their reliance on coal, but the growing industry threatens the province’s ability to meet its climate commitments. Photo: Shutterstock
We hear it time and time again:
“These are the stories that need to be told and you are some of the only ones telling them,” John, a new member of The Narwhal, wrote in to say.