Yukon University launches study into native plant use for mine remediation

By Julien Gignac (Local Journalism Initiative reporter)
Share
Some of the largest miners operating in Yukon have agreed to participate and help fund the revegetation research project.

Companies looking to use native seeds and plants for mine remediation are getting a boost from Yukon University through a new revegetation study.

The goal of the study is to develop a greater understanding of the best plants to choose, and the conditions they need, to help remediate disturbed lands.

“There’s a lack of knowledge regarding mine revegetation in the North,” said Guillaume Nielsen, the industrial research chair in northern mine remediation at Yukon University who launched the study in collaboration with the University of Alberta.

“We don’t know how to do revegetation in the North because of our specific climate.”

He also noted the lack of a Yukon seed bank for industrial use is part of the challenge.

“Without this research, we might continue to encounter failed attempts to do mine revegetation or continue to do revegetation projects in a way that does not align with First Nations’ expectations,” he said.

The four-year project will focus on the hard rock industry, and some of the largest miners in the territory — both in operation and awaiting the green light from the Yukon Environmental and Socio-economic Assessment Board — have signed on to it, Nielsen said.

Companies such as Victoria Gold, whose Eagle Gold Mine is the largest producing gold mine in Yukon’s history, are funding the research.

Next month, researchers will select parcels of land on the Coffee Gold mine property south of Dawson City to study the feasibility of revegetation there. (Newmont, the company that owns the proposed Coffee project, is also a funder for the study.)

By production value, Coffee Gold could eventually eclipse Eagle Gold Mine’s production and will have a footprint of 22,000 hectares — equal to about half of the City of Whitehorse. It’s currently under review by the environmental assessment board and a production start date hasn’t yet been set. 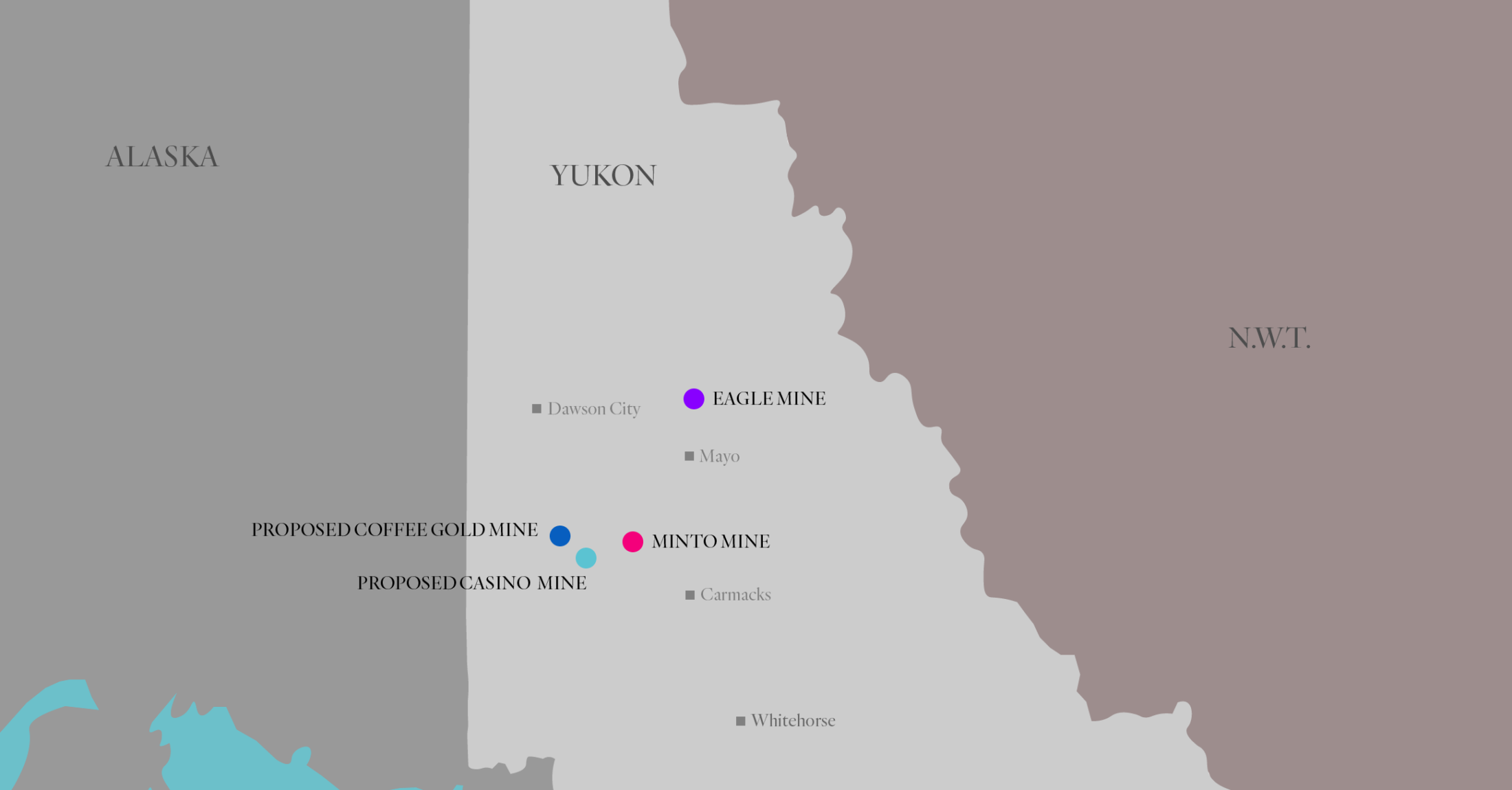 There are two operating mines in Yukon currently — Minto and Eagle. Coffee Gold and Casino are both under review. Map: Carol Linnitt / The Narwhal

“While the Coffee project is still only in exploration, planning for closure allows us to make better decisions in early mine design,” said Lillian Chow, a company spokesperson, in an email to The Narwhal, adding that using native plants is baked into its reclamation plans.

The research project will include two one-hectare test plots at the mine site — one above the alpine treeline and another below it. Green alder, soapberry and white mountain avens may be planted, though the species selected could change over time.

At mine sites, tree cover is often cleared away, meaning there’s no shelter for plants from strong winds and snow, for instance. Researchers are going to look into using native shrubs that could provide that shelter to other plants, which Nielsen said could increase rates of survival.

He said the Coffee Gold site is ideal because it can act as a barometer for future revegetation work across the territory. Exposure to the sun, moisture, soil nutrients and climate change predictions will be assessed to select the plants that are hardened to potentially harsh conditions.

“It’s central Yukon, so it has a climate condition that is kind of representative of the rest of the Yukon,” Nielsen said. “The knowledge we produce has to be usable for the rest of the North.”

There’s a short growing season in the territory, which is compounded by a lack of organic material, dry soils and high concentrations of metal at mine sites, according to a 2017 Yukon Research Centre report. Native plants are the best candidates for revegetating these spaces because they have the right genetics to grow and survive in Yukon and using them ensures that invasive species aren’t brought in.

First Nations input is essential to the research project, Nielsen said, as they supply traditional knowledge regarding the local flora, fauna and changes to their environment. Coupling this with scientific research means the chances of success is higher, he said, adding that variables such as growing plants that sustain caribou herds or fostering the growth of certain medicinal plants will be considered.

While a proposed research plan has been completed, the university’s partners, including the University of Alberta, need to sign off on it before it’s made public.

First Nations are tapping into mine revegetation potential

The community of Ross River, located in southeastern Yukon, is working with the university on a project of its own that involves turning a native plant nursery into a profitable business venture by selling seeds and seedlings to companies and governments charged with cleaning up some of the most contaminated mine sites in the territory.

Stanley Noel, chief executive director of Dena Nezziddi Development Corp., the economic development arm of Ross River Dena Council, told The Narwhal recently that there are billions of dollars’ worth of remediation work to be done on sites such as Faro and Wolverine mines. Native plant revegetation could pose one opportunity to both restore mine sites and provide further financial security for communities.

Yukon Seed and Restoration is another company that the university is working with on mine site revegetation. Launched in 2018, the business, the majority of which is owned by Na-Cho Nyäk Dun Development Corporation, harvests wild, native seeds and sells them to companies — Victoria Gold, for instance. It also provides recommendations for reclamation plans that involve the use of native seed species.

This summer, the company intends to collect between 100 and 1,000 kilograms of wild seeds, said Eri Boye, co-owner of Yukon Seed and Restoration and principal at Core Geoscience Services.

Boye said the company is in the process of building up a stockpile of local seeds and provided the university with upward of 13,000 wild seeds for the research project.

He sees this research as a benefit for Yukon as it provides a template to work from on remediation projects. And, he added, it won’t only apply to mine sites, with other areas such as highways, transmission lines and trails also requiring different scales of restoration.

While this year’s field season was pushed back due to COVID-19, Nielsen said planting on the test sites should begin in the fall or next spring.

Banner: Some of the largest miners operating in Yukon have agreed to participate and help fund the revegetation research project.
We hear it time and time again:
“These are the stories that need to be told and you are some of the only ones telling them,” John, a new member of The Narwhal, wrote in to say.

The Chiefs of Ontario are calling on the Ford government to repeal the More Homes...

In a letter obtained by The Narwhal, a lobby group for builders and developers expresses...

B.C. vows to reverse ‘short-term thinking’ with pledge to protect 30% of province by 2030

Advocates say Premier David Eby’s conservation mandate is an ‘important step’ in the fight against...