Federal partnership to aid Indigenous-led monitoring and research of 24,000 hectares of remote Arctic islands that provide critical habitat for polar bears and other species affected by the climate emergency

A string of 24 remote islands in northeastern Hudson Bay are a step closer to forming a new 24,000-hectare Indigenous Protected and Conserved Area after the northern community of Inukjuak, Que., received $1.43 million in partner support from the federal government earlier this month.

The islands — called Arqvilliit, which means “the place where you see bowhead whales” in Inuktitut — act as a refuge for wildlife whose habitat is increasingly threatened by climate change, polar bears in particular.

Shaomik Inukpuk, town manager of Inukjuak and chair of the Arqvillit protected area steering committee, told The Narwhal the ecosystem will be unable to function without polar bears.

“Although we hunt polar bears, we need the polar bears — they maintain the critical balance of keeping different species in check,” Inukpuk said. “We need polar bears in hunting seals. If there are too many seals, there will be a lot less fish, which can have a tremendous impact on people here.”

Much of the federal funding will go toward research and monitoring efforts on the islands.

This year is on track to be the worst for Arctic sea ice, which has been receding at unprecedented rates in recent years due to climate change and above-average temperature increases in the Arctic. The loss of sea ice prevents polar bears from accessing seal-hunting grounds and is believed to be contributing to the decline of populations and the size of individual bears.

Polar bears will be the focus of preliminary monitoring and research, Inukpuk said.

The islands a ‘safe haven’ for wildlife

The islands, which are technically located in Nunavut but fall within Quebec’s Nunavik marine region, are teeming with wildlife such as seals, walrus, bowhead whales, ducks and shorebirds.

While research and monitoring will initially focus on polar bear habitat, other species such as Atlantic walruses, harlequin ducks and common eiders will also benefit, Inukpuk said.

“It’s very important to control the population of different species,” he said, adding that the islands could receive designated protected status in about three years, if everything goes according to plan.

Protecting the islands, which are also known as the Ottawa Islands, dovetails with the Government of Canada’s national commitment to conserve 25 per cent of Canada’s land, inland waters and oceans by 2025, Cecelia Parsons, a spokesperson with Environment and Climate Change Canada, told The Narwhal in an email.

In total, 68 Indigenous-led projects, including Arqvilliit, were selected this year to receive funding from the Canada Nature Fund, a five-year funding initiative, Parsons added.

“The protection of Arqvilliit is an important step towards reconciliation with Nunavik Inuit, by supporting and respecting their way of life and the wildlife on which they rely for their health, culture and livelihood.

A Rock Ptarmigan sits among the rocks near the shores of Arqvilliit, with Hudson Bay in the background. Photo: Lisa Koperqualuk / Arqvilliit IPCA Steering Committee

The islands have so far been spared from development, leaving the natural cycles of local flora and fauna undisturbed. Putting protections in place now will ensure the islands stay that way for polar bears, Inukpuk said, adding the islands serve as the predators’ home base, where they mate, rear their young and return to after hunting seals from ice floes.

Surrounding the islands, though, is quite literally a sea of change.

“The biggest impact is the thinning of the ice. It’s visible,” he said. “Every year the ice is getting thinner. Even if it will be very thin, we’re hoping at least the polar bears will have a place to go.”

According to a 2018 traditional knowledge report, residents of three Nunavik Inuit communities noted an abundance of polar bears in the Nunavik marine region, despite population declines in other areas surrounding Hudson Bay.

“Participants in all three communities generally felt that the number of bears is healthy, and among the highest numbers they have seen in their lifetime,” the report states.

However, many participants expressed concern that the increase in bears observed in the region is linked to changing environmental conditions, including warmer ocean currents that are contributing to unstable ice.

“For example, in years when there are large areas of open water near communities, more bears are observed,” the report states.

Protecting the islands over the long term could help prevent polar bears being driven onto the mainland, Inukpuk said.

There’s also hope that an increase in monitoring can lead to a better understanding of how the islands are vulnerable to ocean pollution. In Hudson Bay, currents tend to move counter-clockwise, “so the islands actually receive whatever is carried in that water,” said Jennie Knopp, community and science director at Oceans North, a marine conservation organization that works with Indigenous and coastal communities and an adviser and project coordinator with the Arqvilliit steering committee.

“It’s one of the reasons the steering committee wants to do monitoring and protections of the islands to ensure that, in the future, if there’s pollution — microplastics, whatever — that it’s not going to negatively impact the islands,” she said.

The islands already benefit animals that depend on them for much of their survival, Knopp said. The trick is to keep the islands the way they are.

“I guess the best way you can describe [the islands] is that they’re like a safe haven in the middle of the bay,” she said.

Indigenous-led research a priority for Arqvilliit

The habitats that the islands provide, along with a list of species that use them, aren’t well documented, Knopp said, so developing a catalogue of wildlife is a priority. Trail cameras will be set up to estimate the population of polar bears and further research will be done to determine exactly how they use the islands.

“We’re working on a plan to figure out what that looks like because it’s quite a big area,” she said, adding that Nunavik Inuit are going to carry out most of the monitoring efforts. “We’re focusing on areas that will give us the most information.”

Part of the early work will include documenting traditional knowledge, mapping the islands and conducting interviews to identify areas of cultural or archeological value for the Inuit, Knopp said. 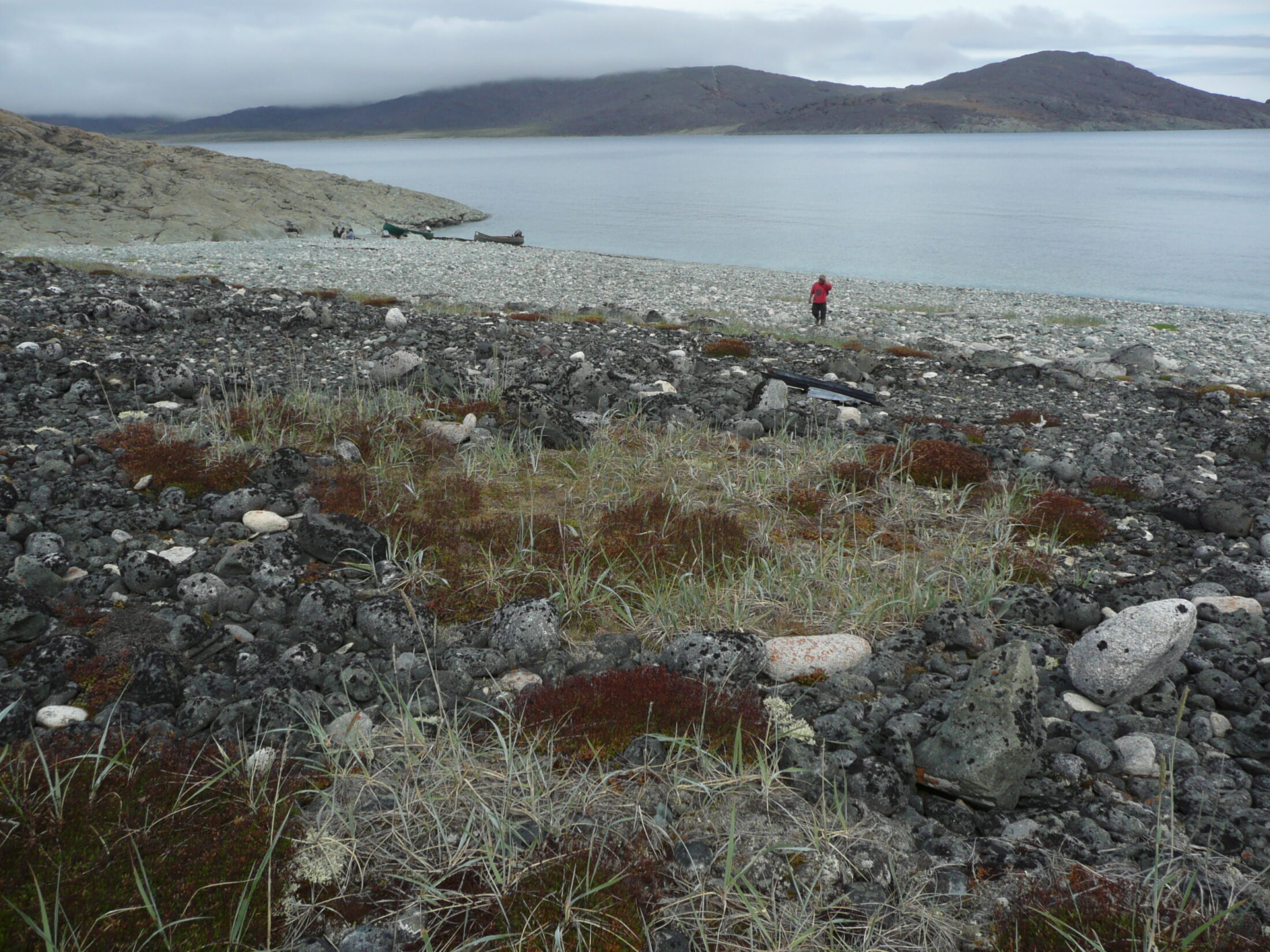 An archaeological site in a bay on one of the Arqvilliit islands. Photo: Yvan Pouliot / Arqvilliit IPCA Steering Committee

“It’s a historically important location for Inuit,” she said, adding that rocks arranged in circles indicate where tents once stood and there are remnants of large caches that likely stored meat at one time. Massive bowhead whale bones are also commonly found on the islands.

“This is a watershed moment that the government is recognizing the ability of Nunavik Inuit or any Indigenous group in Canada to manage and conserve their own lands as they’ve done for a millennia,” she said. “It’s a really nice shift in conservation and Inuit self-determination.”

Banner: Rocky shores on one of the Arqvilliit islands. Photo: Yvan Pouliot / Arqvilliit IPCA Steering Committee
We hear it time and time again:
“These are the stories that need to be told and you are some of the only ones telling them,” John, a new member of The Narwhal, wrote in to say.