On Tuesday, a Cooke subsidiary was found responsible for an August 2017 fish farm mishap that released up to 263,000 Atlantic Salmon into Washington’s Puget Sound — in addition to misleading the public and regulators about the cause, and lowballing the number of fish that escaped.

Those were the key findings of an investigation led by Washington’s Department of Ecology, Department of Fish and Wildlife and Department of Natural Resources (DNR) — which started last fall after a net pen near Cypress Island in Puget Sound (about 50 km east of Victoria) broke up on August 19.

“The collapse was not the result of natural causes,” said Hilary Franz, commissioner of public lands at a press conference Tuesday.  “Cooke’s disregard caused this disaster and recklessly put our state’s aquatic ecosystem at risk.”

On the same day this was announced, the state also fined the company $322,000 for violations of Washington state water quality laws associated with the August incident.

The outcome of the investigation is just the latest setback for Cooke and a nascent Atlantic salmon farming industry attempting to gain a foothold in Washington state — currently the only Pacific U.S. state where Atlantic salmon are farmed in ocean net pens.

In December, the Department of Natural Resources terminated Cooke’s lease of aquatic lands at Port Angeles — one of four sites the company has in the state — alleging multiple violations, and prompting the company to launch legal action that is pending. A month later, a coalition of Washington state tribes demanded that legislators outlaw Atlantic salmon farming in Puget Sound altogether.

But by far the most serious risk to Atlantic salmon farming in Washington state is the threat that lawmakers will phase out the industry for good. A case in point: a bill co-sponsored by Washington Senator Kevin Ranker that would prohibit the state from awarding new (or renewing old) farm leases like those run by Cooke continues to advance.

Could the bad news of this investigation be a final nail in the coffin for Atlantic salmon farming in Washington state?

State investigators say that last August, tidal currents at Cypress Island pushed against a heavy build-up of mussels and other organisms on the nets — weighing 110 tons in all — and overwhelming the pen’s mooring system and crushing the pen. Not only did Cooke fail to remove the mussels and clean the pens as they should have, the investigators concluded, they did not take “necessary precautions” after an earlier July incident that saw the Cypress Island net pens shift under the force of strong currents.

“The results of our investigative report clearly show a significant violation of Washington’s water quality laws,” said Ecology Director Maia Bellon on Tuesday. “Cooke Aquaculture could have prevented this failure.”

“Cooke Aquaculture could have prevented this failure.”https://t.co/sxp7cAAdo4

Based on Cooke’s reports, it was widely reported that 160,000 fish escaped as a result of the incident.

But state investigators on Tuesday said Cooke “misrepresented” the number of fish it harvested when the pen collapsed, which ultimately low-balled the total number of unaccounted fish.

Of the 305,000 fish in the pen, the company claimed to have extracted 145,000 fish, but the investigators concluded that Cooke could only have removed a maximum of 62,000 fish. The state now says the real number of escaped Atlantics could be as high as 263,000.

The issue of escapes has been high profile because wild Pacific salmon continue to struggle and the prospects of competition and disease transmission from escaped Atlantic salmon could hasten the decline.

Since the escapes, fishermen in Washington and B.C. have caught about 2,000 Atlantic salmon while Washington’s Lummi Nation, which declared a state of emergency after the disaster, has recovered at least 20,000. 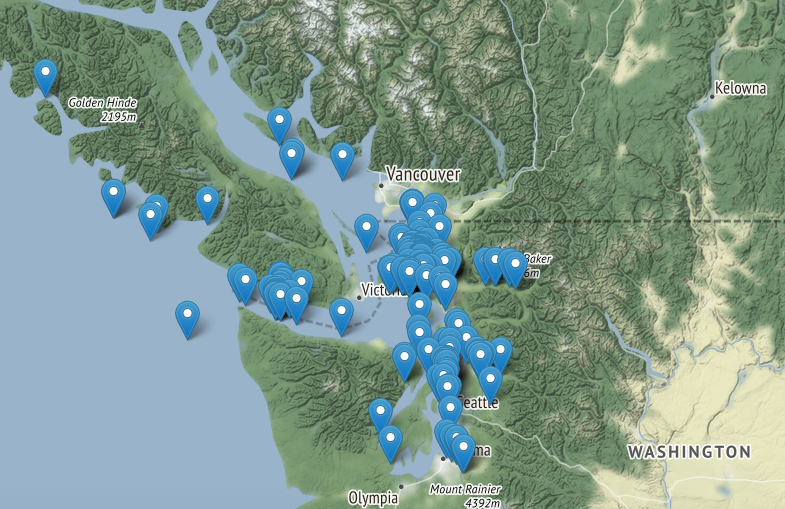 A Washington Department of Fish and Wildlife map details the location of Atlantic farmed salmon caught and reported by anglers.

“Too much is at stake — and the risks are too great — to allow Atlantic salmon aquaculture to continue now,” reads the letter.

This week, a joint statement by four B.C. ministers and five Broughton-area First Nations confirmed discussions were continuing, but no changes were announced.

Troubled waters ahead for salmon farming in Washington?

On Tuesday, Cooke Aquaculture Pacific lashed out against the state investigation. Vice president of public relations Joel Richardson told DeSmog Canada the company did not overestimate the number of fish recovered and rejects the state’s explanation for the cause of the disaster, despite a concession that the company “fell behind in [net] hygiene.”  (Richardson says the real cause of the mishap is likely a combination factors, and cannot be solely attributed to the buildup of mussels on the nets.)

Commissioner Franz, whose Department of Natural Resources is technically Cooke’s landlord on the seabed where it farms, is now reviewing the report and will make an announcement in the coming week regarding the future of the Cypress Island facility. Asked if evicting the company was an option from this site, a spokesman for the department said “all options are on the table.”

Regardless of what comes next, it’s clear that Cooke has made powerful enemies in Washington state.

Christopher Pollon is a Vancouver-based independent journalist who reports on the politics of natural resources, focusing on energy, mines and…