Employees at the LNG Canada work site in Kitimat, B.C., complained multiple times about unsafe working conditions just months before the facility experienced a COVID-19 outbreak, according to WorkSafeBC inspection reports obtained by The Narwhal.

The outbreak at LNG Canada started on Nov. 19 and there are now 54 cases. In the months leading up to the outbreak, workers raised concerns about COVID-19 cleaning procedures in common areas, rooms and work spaces, prompting inspections by WorkSafeBC on Aug. 28 and Oct. 19. However, WorkSafeBC did not find any violations of the Workers Compensation Act or the public health order.

The documents also reveal that a WorkSafeBC inspection of the Site C work camp’s sewage treatment facility in northeast B.C. on March 19 found the facility did not have a plan to sufficiently protect workers from pathogens, body fluids, human waste, mould and COVID-19. WorkSafeBC didn’t say if or how this was resolved.

The first case of COVID-19 at Site C was in July and there have been 17 cases to date. On Dec. 4, BC Hydro reported five active cases and 18 people in self-isolation.

Construction at the Site C dam, where there have been 17 COVID-19 cases to date. Photo: Jayce Hawkins / The Narwhal

More than 180 frontline health workers have signed an open letter to Provincial Health Officer Dr. Bonnie Henry that started circulating on Thursday, calling on her to immediately shut down industrial work camps on Indigenous territories.

“To put the interests of economy and industry ahead of Indigenous lives is not public health,” the letter says. “To put Indigenous Elders and youth at further risk in the midst of a pandemic is to say quite clearly that Indigenous lives still do not matter in B.C.”

On Thursday, the Unist’ot’en Camp said Coastal GasLink confirmed five new cases at its camp 9A on Unist’ot’en territory. Sley’do Molly Wickham, Gidimt’en Camp spokesperson, said at least one Wet’suwet’en worker in a Coastal GasLink work camp recently contracted the virus and is now hospitalized in an induced coma. 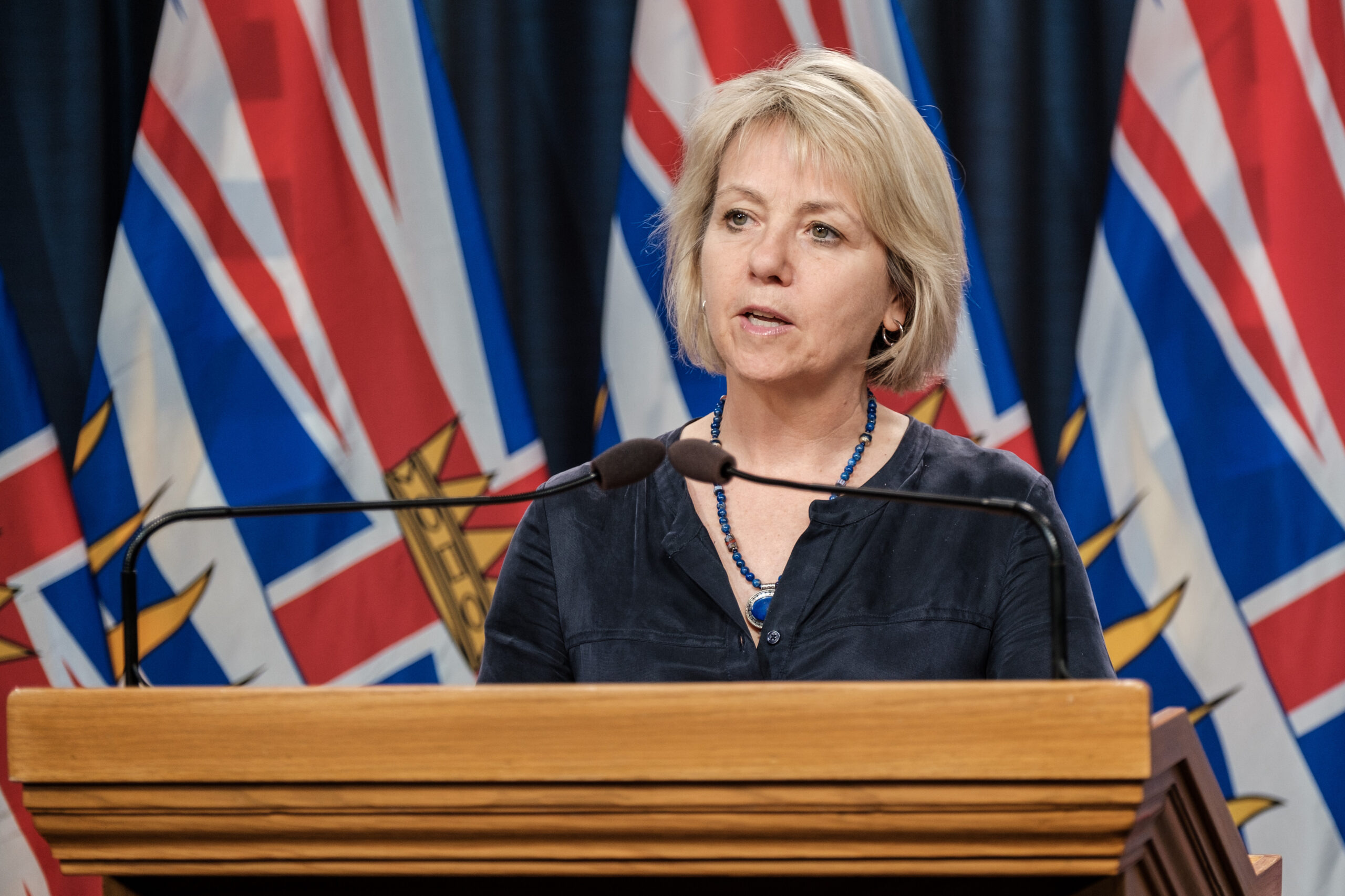 David Bowering, former chief medical officer for Northern Health, said the time has come for the province to shift gears and take a hard look at what it deems essential.

“Is it industry first, or the health and safety of the population in the north first? They need to rethink the essential designation and say it’s not that essential, certainly not at this price.”

Bowering told The Narwhal he’s surprised it took this long for an outbreak in the work camps to occur.

In the early days of the pandemic, he wrote an open letter to Henry urging her to shut down the work camps, calling them “land locked cruise ships” and warning that cases related to these industrial sites were inevitable. He knows what he’s talking about — his first job as a doctor was at a mining camp.

He called the safety plans prepared by LNG Canada and Coastal GasLink “deluxe” documents but says the best plans in the world don’t mean anything if people aren’t following the rules.

“They have luxury-class health and safety plans and luxury-class consultants compared to what the public sector can afford,” he said. “The virus doesn’t respect paper protocols. There’s just too much human nature involved.”

The site of the LNG Canada project in Kitimat, B.C. Photo: Garth Lenz / The Narwhal

Bowering is concerned that capacity at Northern Health hospitals is already stretched thin. In a statement released yesterday, the health authority said it is “experiencing an increase in COVID-19 activity and hospitalizations for COVID-19 patients requiring critical care.”

On Friday, 50 new cases were announced in Northern Health, bringing the total to 270 with 39 people in hospital.

Patients have already been transferred to hospitals outside the region to deal with the increase.

“I think we’re in for a rough ride,” Bowering said. “The worry about our local hospitals and our local staff being overwhelmed, burned out and having difficulty coping, that’s becoming a pretty clear reality. Our communities need help.”

Bowering isn’t alone in his calls to shut down work camps.

The open letter from frontline health workers calls for Henry to take “immediate action” and shut down work camps.

“As health professionals, we have a responsibility to uphold the current and future health of these communities, which are now under threat from the continuing of Coastal GasLink (LNG) work and man camps,” the letter says.

Camp 9A in Wet’suwet’en territory near Houston, B.C. Photo: Amber Bracken / The Narwhal

The frontline health workers’ letter is in support of concerns raised by more than 20 Wet’suwet’en matriarchs, or Ts’ako ze’, in an open letter to Henry dated Nov. 30. In that letter, the matriarchs asked the public health officer to reconsider the essential designation given to the oil and gas industry and close work camps, which have also been shown to increase violence against Indigenous women and children and bring a host of social ills.

“Not only have we witnessed an increase in drugs, alcohol and gang-related violence in our communities, we are now faced with a disease that could kill any one of us,” the matriarchs wrote. “In addition to the risk man camps have on our Indigenous women and girls, we are now facing the loss of some of our most sacred elders and chiefs.”

At the time of publication, the Ts’ako ze’ said they had not received a response from the public health officer.

Indigenous people at higher risk of COVID-19 in B.C. due to systemic racism in health

The calls to shut down work camps come in the wake of a damning independent review that found widespread racism and discrimination against Indigenous people in B.C. health care. The 224-page report released on Nov. 30 found that racism and discrimination negatively affect the treatment and health outcomes of Indigenous people, who are already at higher risk of health issues due to a number of factors related to systemic racism, such a poverty and intergenerational trauma.

“Many Indigenous people have underlying health conditions because of all of the impacts of colonization,” Wickham said. “We have higher rates of diabetes and higher rates of heart disease. Our people are at greater risk of dying.”

Wickham said a particularly alarming aspect of the increase in cases in work camps is the potential impact on Indigenous communities. Most industrial operations have a mandate to hire local and Indigenous workers and those people mix with transient workers and, on their days off, with members of their own communities.

Bowering said the continued presence of industrial activity is contradictory to the goals of the public health office. “I drive by First Nations [communities] and see the barriers and the closed signs — these people are trying remarkably hard to stay safe,” he said. “But at the same time, there are buses coming and going to many of them, up to the mines and back.”

The BC Centre for Disease Control noted in its guidance document for industrial sites that Indigenous people are at higher risk of COVID-19 and recommended that employers limit workers’ interactions in surrounding towns. But Bowering and Wickham said the presence of out of town workers in the region is both common and on the rise.

“We have been concerned about not just the man camps, but the fact that a lot of the workers are living in our communities and hotels,” Wickham said. “They’re going back and forth every day.”

Bowering said the B.C. public health office can easily put the brakes on what could quickly become a serious and escalating crisis in high-risk communities.

“They have to decide whether having everybody else not travelling, but allowing these workers to travel is a reasonable public health decision? Is it even ethically reasonable?”

“The whole territory is just crawling with workers,” Wickham said. She lives with her partner and three children in a cabin near the Coastal GasLink work zone. “They have helicopters flying overhead at least two or three times a day, both surveillance helicopters and industry helicopters slinging materials in and out of the territory. It’s a warzone out there.”

Banner: LNG Canada workers raised concerns about COVID-19 cleaning procedures in common areas — such as worker housing, shown here — prior to the COVID-19 outbreak, which now includes more than 50 cases. Photo: Bird-ATCO
We hear it time and time again:
“These are the stories that need to be told and you are some of the only ones telling them,” John, a new member of The Narwhal, wrote in to say.