Clinton Creek doesn’t get the level of attention other major mine clean-ups in the territory do, but it could become a big problem, especially for a small Alaskan city downstream

By Julien Gignac (Local Journalism Initiative reporter)
Share
The Porcupine Pit at the abandoned Clinton Creek Mine and Hudgeon Lake, in 2012. The artificial lake formed in 1974 by a landslide of waste rock and tailings that dammed Clinton Creek.

An abandoned asbestos mine in a remote corner of Yukon has yet to be remediated 42 years after closing, and could pose a flood risk to anyone downstream, according to the federal government.

“Clinton Creek is literally on the edge of the map,” said Lewis Rifkind, mining analyst for the Yukon Conservation Society. The mine is on the western border of Yukon, about 100 kilometres northwest of Dawson City. “It’s out of sight, out of mind.”

Clinton Creek Mine opened in 1967 and is the only mine on record in the territory to extract asbestos — a mineral often used in construction materials, such as insulation, and fire-proof coating, until it was found to cause cancer when its microscopic fibres are breathed in. Asbestos gradually ceased to be used in the 1970s, though its use was only banned by the federal government in 2018.

Yukon’s former open-pit asbestos mine was decommissioned in 1978 by its then-owner Cassiar Asbestos Corporation.

“That mine was developed way before environmental assessments or economic impact agreements, anything,” Rifkind said. “It’s just there.” 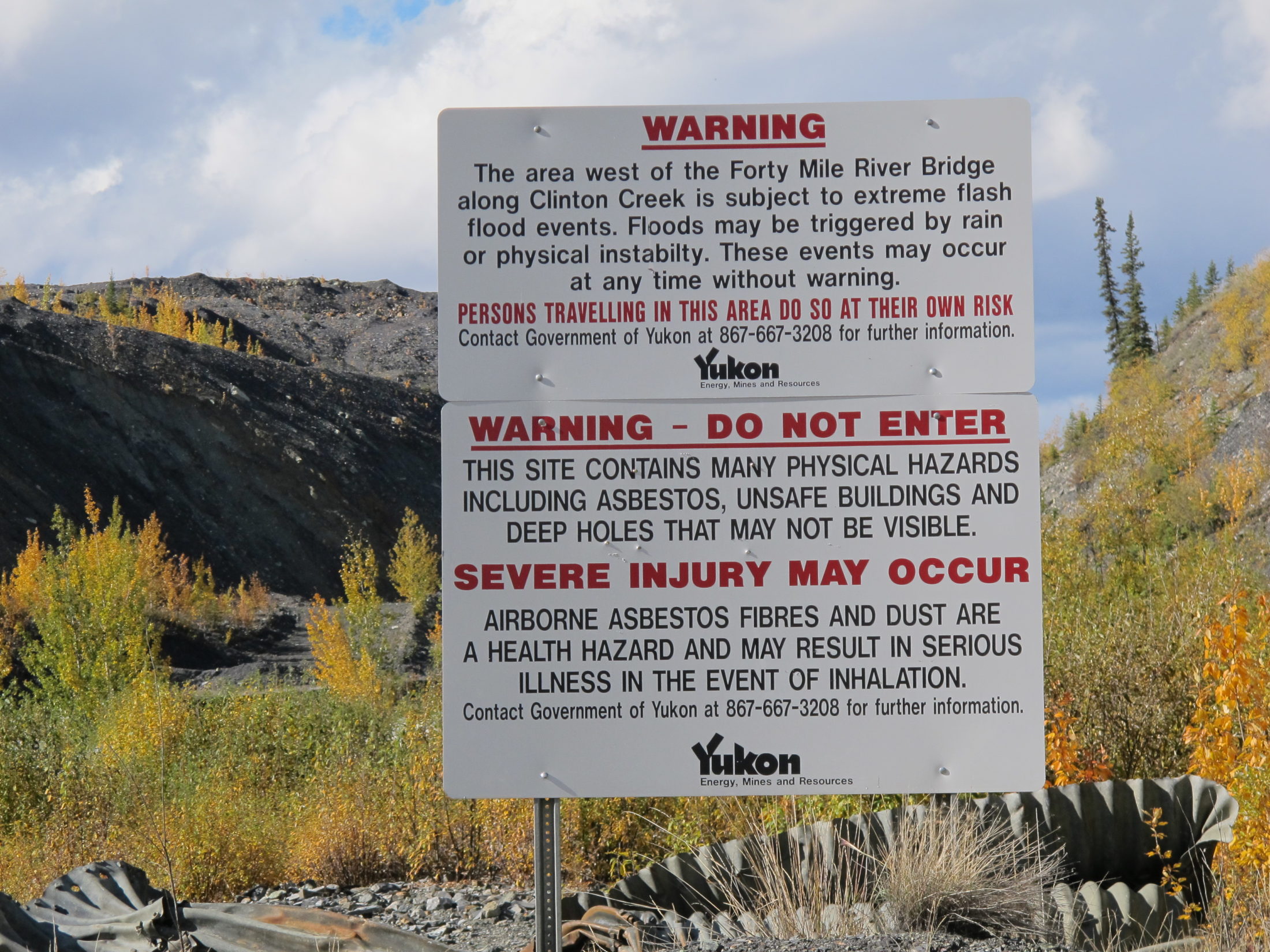 A sign posted at the Clinton Creek Mine site by the Government of Yukon.

The road to Clinton Creek dead-ends at the mine site, about 12 kilometres from the Forty Mile River, which pours into the Yukon River. The abandoned mine gets less attention than others in the territory such as Faro, a former zinc and lead mine — once the largest in the world — which is just 15 kilometres north of the town of the same name. Plans for remediation are much further along at Faro, having been submitted to the environmental assessment board, and anticipated to start in 2024. The cleanup is expected to take around 15 years and cost about $500 million in federal money.

There’s currently no start date for reclamation work at Clinton Creek, since there’s no plan in place, Sue Thomas, a spokesperson with Yukon’s Department of Energy, Mines and Resources said in an email.

The Tr’ondëk Hwëch’in First Nation, on whose territory Clinton Creek is located, the Yukon and Canadian governments, are in the process of developing that remediation plan, but the site remains a risk of uncertain degree until that work is underway. A spokesperson for the Tr’ondëk Hwëch’in was not available by publication time.

The Yukon government has notified the public to stay away from Clinton Creek for years. The ground is unstable, with waste rock and tailings throughout. There’s a risk of inhaling asbestos, and the site is susceptible to “extreme” flash floods.

This is worrying for the nearest community downstream of Clinton Creek: Eagle, Alaska — some 40 kilometres away.

The community of roughly 120 people along the Yukon River is launching a water sampling study in the coming weeks. The study is not being undertaken specifically to identify possible environmental effects of Clinton Creek, Chief Karma Ulvia told The Narwhal, but it could provide a better understanding of the levels of asbestos in the water, as well as metals.

“The asbestos can blow in the air, so of course that can get in the river, which can get in the fish,” Ulvia said. “It definitely can pollute the river. We would be very interested in helping to get it cleaned up. For me, I’m concerned about our people, the fish, our subsistence way of life.”

What happened at Clinton Creek Mine?

In Clinton Creek’s lifespan, 940,000 tonnes of asbestos were mined, according to a report by the Dawson Regional Planning Commission, which is in the process of drawing information together to eventually establish a land use plan in the region.

In 1974, the slope of the mine’s waste rock dump failed, pouring 60 million tonnes of waste rock and tailings into Clinton Creek valley, blocking Clinton Creek, according to the report. The dam that resulted from that slide created a 25-metre-deep artificial lake that remains today. The sprawling 115-hectare Hudgeon Lake runs the risk of flooding under heavy rain or snowfall. After several failed attempts to control overflow from the lake, in 2002, the Yukon government had a channel built from Hudgeon Lake over the waste rock dam, and fortified the entrance to Clinton Creek to limit erosion. The hope is to prevent a full breach of the dam that could empty the lake, sending 500 cubic metres per second of potentially contaminated water down to Forty Mile River.

Despite work to restabilize the channel, there is a continued risk that Hudgeon Lake could overflow as the spring freshet gets more pronounced every year, Rifkind said.

“If you have a lot of water going into that lake you could get erosion issues on the channel,” he said. “Once a channel starts to erode, you could get a catastrophic failure. Impacts downstream would be unknown.”

Some remediation work at the site was completed by the former mine owner, but a full remediation agreement between Cassiar and the federal government was never reached, according to a report on remediation options for Hudgeon Lake. 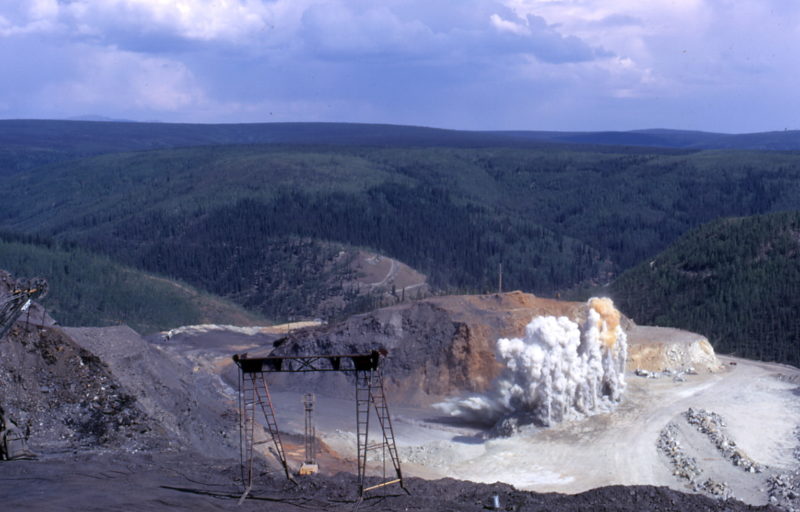 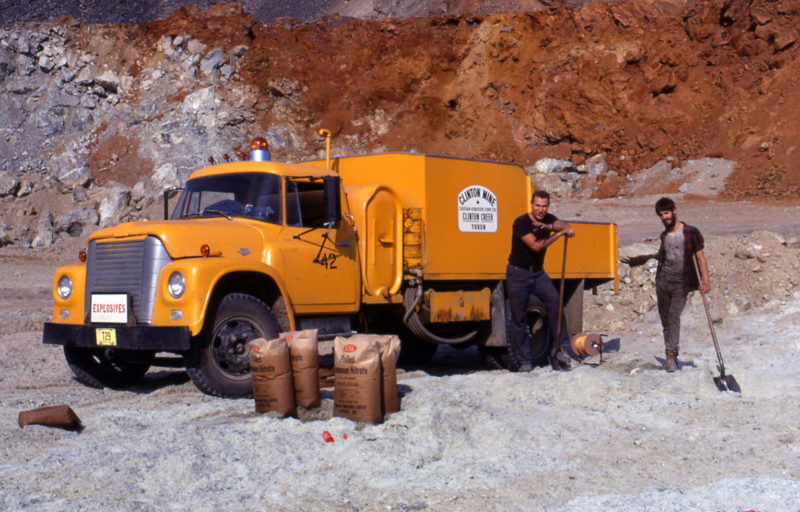 Cassiar, which also operated an asbestos mine and now-abandoned mining town of the same name in B.C. near the Yukon border, was purchased by Princeton Mining Corporation in 1991 and went bankrupt in 1992. A decade later, the federal government sent a directive to the former owners of the company to stabilize the channel, which went unanswered. The site was then labelled abandoned.

In 2003, the Yukon government took over care and maintenance of the Clinton Creek site, working on water diversion, geotechnical stability and environmental monitoring — funded by the federal government, who permitted the mine in the first place.

“Upgrades completed at site thus far have been aimed at stabilizing sections of the Clinton Creek channel that are susceptible to erosion during high flow events,” Thomas of Yukon’s Department ofEnergy, Mines and Resources said.

The Yukon government issued an order in council in 2006 prohibiting the staking of new mineral claims across the majority of the Clinton Creek Mine site, to allow for the reclamation of damages already incurred there.

Public access to the site was restricted in 2012 because of a threat to human health and safety. A bevy of signs are posted along the road leading to the site, notifying the public of the risks should they enter.

Last August, the federal government earmarked $2.2 billion over 15 years for remediation projects at eight sites in Yukon and the Northwest Territories, including Clinton Creek and Faro. According to a spokesperson with Crown-Indigenous Relations and Northern Affairs Canada, the portion dedicated to Clinton Creek has not yet been determined as the site remediation plan is still in development.

Earlier this year, the Yukon government commissioned a report on potential options for remediation of Clinton Creek to help develop a plan that will be made public once submitted to the Yukon Environmental and Socio-economic Assessment Board, according to the federal spokesperson. It’s unclear when exactly that will happen. 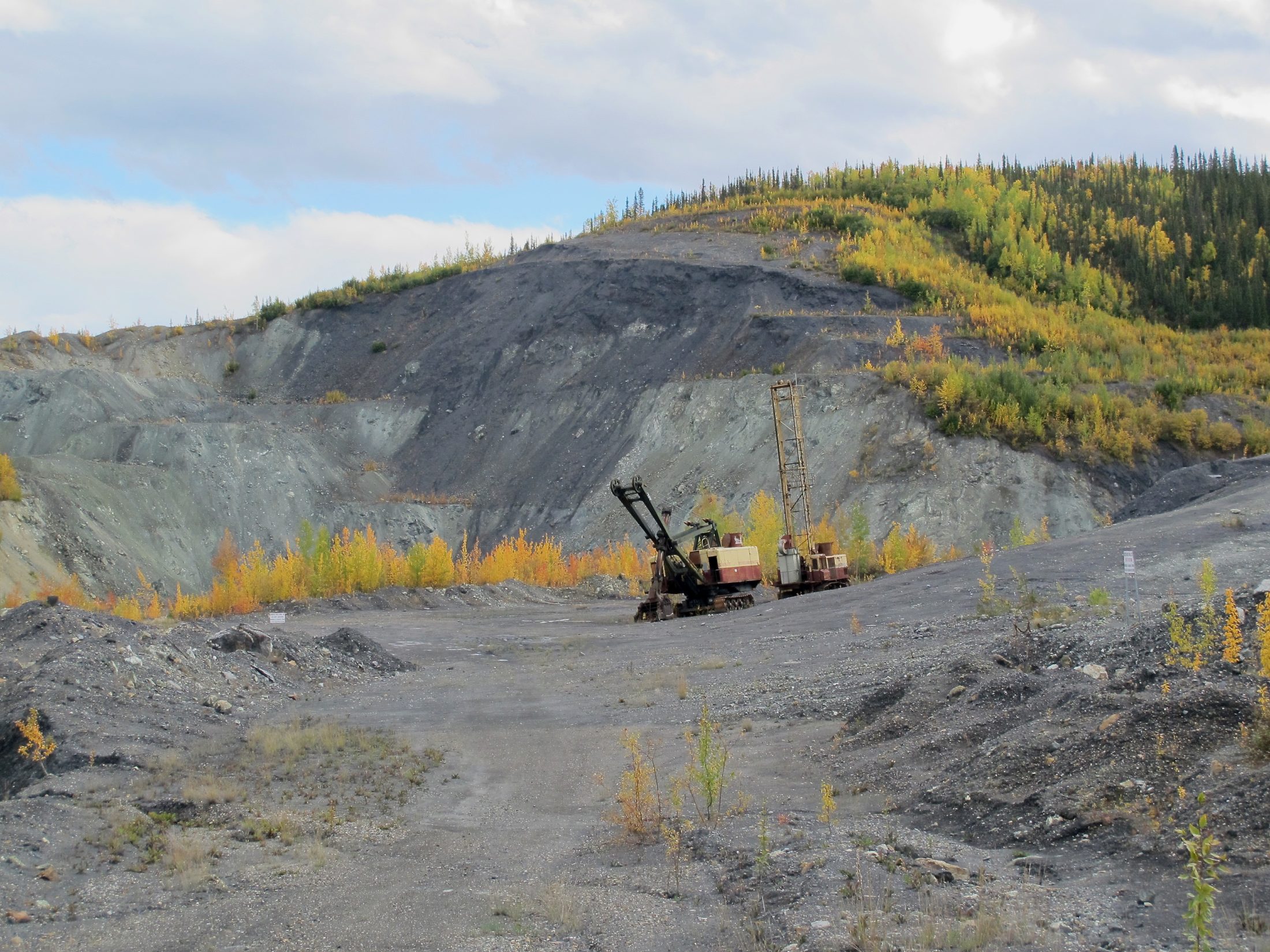 Abandoned equipment at the Clinton Creek mine site in 2012.

The federal government also recognizes such flooding poses a risk to anyone downstream — such as the people of Eagle.

The community experienced severe flooding in 2009, Ulvia said, noting the entire area is prone to the phenomenon.

“We lost our lower village,” she said, adding that she wonders how Clinton Creek may have contributed to the event.

But acid rock drainage and metal leaching at the site are not present concerns, Thomas said. And the department has tested asbestos levels in water at the mine site.

“From an aquatic habitat perspective, asbestos does not appear to be any more harmful than other types of suspended sediment,” Thomas said.

The Government of Canada doesn’t have guidelines for acceptable levels of asbestos in drinking water because there “is no consistent, convincing evidence that ingested asbestos is hazardous.”

But impacts downstream are ultimately unknown, Rifkind said, because they haven’t been studied to the degree they should be.

“If a lot of the issues were remediated, they wouldn’t necessarily go away, but we’d have a greater understanding and know better how to deal with it.”

Update June 24, 2020 at 9:20 a.m. PST: This story was updated to include information provided by a spokesperson with Crown-Indigenous Relations and Northern Affairs Canada that a specific portion of the funding for remediation programs in the North has not yet been determined for Clinton Creek Mine as a remediation plan for the site has not been completed.

Banner: The Porcupine Pit at the abandoned Clinton Creek Mine and Hudgeon Lake, in 2012. The artificial lake formed in 1974 by a landslide of waste rock and tailings that dammed Clinton Creek.