Local support for the open-pit mine grows, even as industrial projects and remote work camps across the province face growing scrutiny for their fly-in-fly-out work forces that increase the risk of COVID-19 transmission
Natalia Balcerzak, Local Journalism Initiative reporter
Apr 7, 2020
10 min read

Despite a growing chorus of concern about the risk industrial work camps pose to remote communities, the Red Chris mine is charting a different course when it comes to industry’s role amid the COVID-19 pandemic.

Owned by Australian mining company Newcrest, the copper and gold mine in northwest B.C. is playing a critical role in providing much-needed resources to the Tahltan Nation, including additional medical services and even grocery deliveries.

Although many regions have called for the closure of natural resource project work camps, which often rely on fly-in-fly-out workers, the Tahltan are eager to keep Red Chris, a major source of employment for the nation, up and running during the pandemic.

“When people are out of work, it stresses our social programs … people who are not working, bring social problems back home and we’re looking at spousal abuse situations that start to arise,” Tahltan band Chief Rick McLean told The Narwhal. “If we can keep people working as long as we can, we can hopefully keep some of those social issues at bay.”

McLean says having the support of an international mining company, which can help source supplies and other forms of aid if an outbreak hits, reassures people they won’t be left behind.

Even as it works closely with Newcrest, the Tahltan Nation COVID-19 emergency management team has voiced concern that individuals have already tested positive for the virus in northern B.C. communities.

“Right now, we are most vulnerable because confirmed cases are both to the north (Whitehorse) and south (Terrace and Smithers) of us,” reads a press release on April 3 from the team, which includes Tahltan leaders, medical authorities and a Red Chris representative.

“By the time a person tests positive for COVID-19 in a Tahltan community, 50 per cent of the community will likely have been exposed. That means we will likely lose most of our elders in that community.”

Ben Wither, Newcrest’s local northern B.C. manager of health, safety, environment, community and people, says it is a privilege to be considered an essential service by the province.

“Our job is to be able to continue to operate in these difficult times and give people financial security by still offering them a job, so that’s our objective,” Wither says. “We’re doing it in a responsible manner that we think meets the expectations of the medical board and also the public.”

Wither says the company encourages all workers at the Red Chris mine to practise social distancing where possible.

“The last thing that seems … reasonable is to have large work camps — that we know will be sources of infection both within themselves and in the local communities, and in the home communities of the workers when they go back,” Bowering said. COVID-19 can be transmitted from individuals who show no symptoms.

As The Narwhal has previously reported, it can be difficult or impossible to adequately social distance at mines with hundreds of workers on site. Employees and contract workers at Teck’s Elk Valley mines in southeast B.C. have come forward to say social distancing protocols and basic sanitation procedures are not being followed at some sites where crews work in pairs, cafeterías and buses are crowded and disinfectants are in short supply.

Local and Indigenous officials have called for the closure of the Site C dam and the White River First Nation in the Yukon is asking the Minto mine to close for at least 30 days.

The tailings impoundment at the Red Chris mine in northwest B.C. Photo: Garth Lenz / The Narwhal

The Red Chris open-pit mine, located about 80 kilometres south of Dease Lake, was initially owned and operated by Imperial Metals, but Newcrest purchased a 70 per cent stake in the project in August of 2019.

Nearly 500 people are employed at Red Chris, including 137 members of the Tahltan Nation, according to Newcrest.

After taking ownership of the project, Newcrest launched a new round of engagement with the Tahltan and local communities, seeking input on how the mine could better serve the region.

As part of those talks, Newcrest committed to employing members of the Tahltan, making consultations with the nation a priority and committing $25 million annually in contracts awarded to Tahltan businesses.

McLean says Tahltans feel proud to be a part of the project and are keen to keep operations up and running during the coronavirus pandemic.

“We’re looking at all the options, understanding that all the decisions made have ramifications so we want to work very closely with [Newcrest] to make sure we’re informed and understood [during this crisis],” he says.

With support from Newcrest’s emergency fund, the company has established “pandemic leave” for Tahltan employees, which will grant two weeks paid leave (accumulating to four calendar weeks), on top of their sick leave.

“If somebody’s impacted because either they have to self-isolate from coming in close contact with someone they knew or they have symptoms, it’s to encourage them to stay at home to respect that social distancing and expectations that we’ve afforded them,” Wither explains.

“One of the main challenges can be that if someone knows they’re not going to get paid, they will potentially hide their detections [of the virus] — hopefully this will eliminate that need.”

The Tahltan Nation Development Corporation announced it will match commitments set by Newcrest, encouraging other local contractors who remain on-site at the mine to do the same for their employees.

In late 2019, Red Chris reached 100 per cent of production, generating 19.5 million pounds copper and 8,419 ounces gold, according to a press release from Imperial Metals, which owns a 30 per cent stake in the mine.

According to Newcrest, that production has not slowed in the wake of the COVID-19 pandemic.

“Our rate of production is not being impacted by these changes and therefore to date we have not experienced any impact to our revenue,” Newcrest’s senior media advisor Rebecca Murphy wrote The Narwhal in an email.

“The additional cost by making COVID-19-related health and safety changes is something we are happy to bear as the health and safety of our people and surrounding communities is the most important consideration.”

Newcrest did not respond to questions about how the pandemic may affect the company’s financial stability or ability to fund emergency measures.

Newcrest continues to fly in workers from across B.C.

Wither says Newcrest plans to continue operating the mine as close as they can to full capacity and is not planning to lay off employees. Non-essential staff are working from home and mine workers have their temperatures checked when entering and leaving, including truck drivers carrying deliveries.

The company continues to fly workers in and out of the Dease Lake Airport in Tahltan territory from “portals,” which include Prince George, Kelowna, Kamloops, Smithers and Williams Lake, Wither says.

According to a company description, buses running Monday to Friday collect workers from the Dease Lake Airport, the Tahltan communities of Dease Lake and Iskut, and a Red Chris pickup location at the intersection of Highway 37 and the mine access gate.

Workers are prohibited from leaving the transport buses to enter local communities, Wither says. “They are a critical control point, so we try on the journeys to decluster [workers].”

The Lower Iskut River, downstream from the Red Chris mine. Photo: Garth Lenz / The Narwhal

The company is considering extending work periods beyond the standard 14 days to decrease the frequency of crew changes, Wither says, adding they may also enforce a period of isolation that exceeds the incubation period of the coronavirus and grant rest days to minimize fatigue.

All mine workers are housed on site, but for local employees who want to return to the communities of Telegraph Creek, Dease Lake and Iskut and live with vulnerable persons, Newcrest will provide access to off-site accommodation.

In an application submitted to the B.C. Environmental Assessment Office on March 16, 2020, Newcrest requested permission to increase capacity at its project work camp to house 650 people.

Limiting the potential for COVID-19 to spread to local communities remains a major concern.

“The biggest worry is our aging population here and we need to keep them safe using masks, ventilators and everything else everyone needs all over the world, which we either have little or none of,” McLean says.

“Newcrest has offered their mobile nursing unit to our communities and to support us in any way they can with whatever their supply chain brings,” he says.

“We’re in the critical time of this whole COVID-19 spread in the next couple of weeks, we need to really work hard and to do our part,” says McLean.

“If we come out of this with no cases, we’ve done our job.”

The 3 Nation Alliance, which includes the Tahltan, Kaska and Tlingit nations, released a pandemic plan on April 2, which acknowledges the communities are operating in coordination with the Red Chris mine, which is listed under the plan’s “medical and health experts” category.

Their biggest concern now is setting up “community quarantine spaces” in case the pandemic hits.

“This is a challenging issue, as no community has surplus housing units and no ATCO [modular office] trailers are available anywhere,” 3 Nations executive director Jack Hicks tells The Narwhal in an email.

Communities are currently working to identify spaces that have potential for quarantine accommodations and, Hicks adds, “when the weather warms up it may be possible to bring RVs to a community if required.”

Indigenous Services Canada has provided the alliance with $100,000 to support pandemic planning. 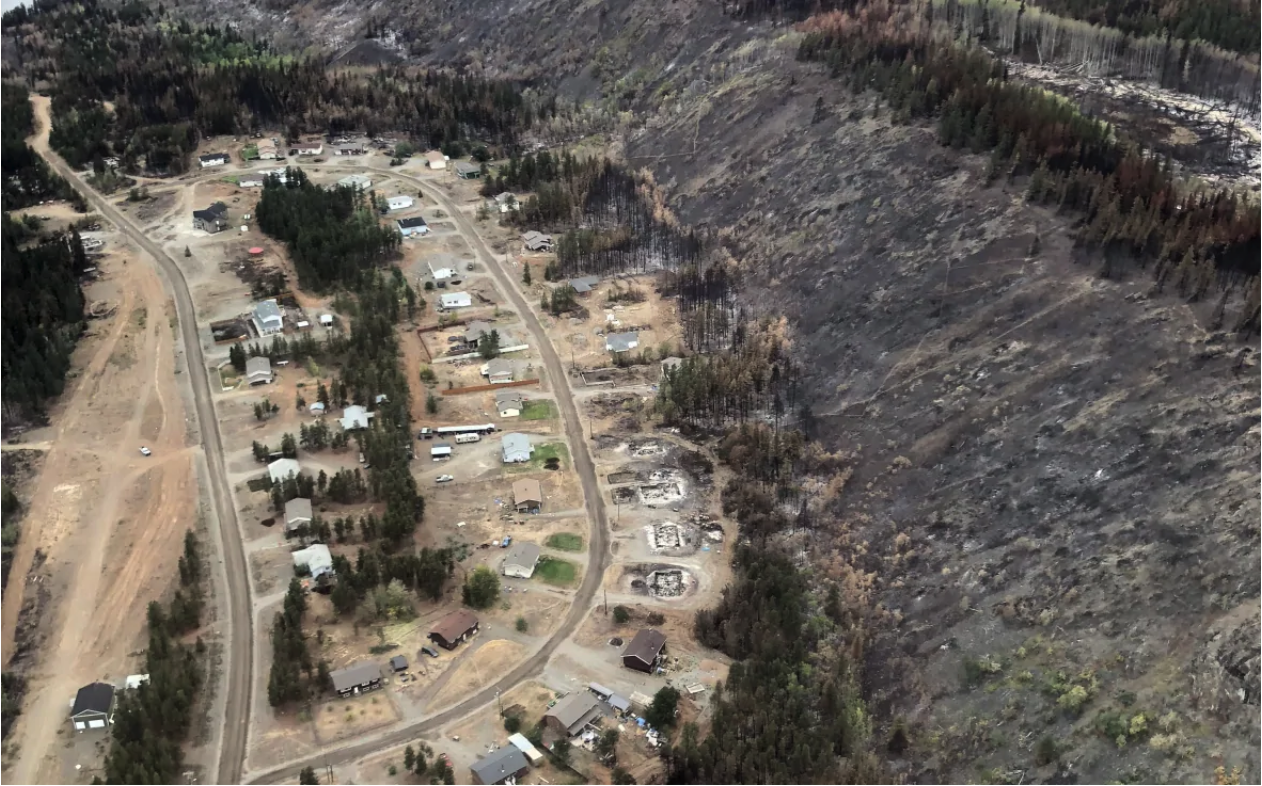 Damage from a 2018 wildfire in the community of Telegraph Creek in Tahltan territory. Photo: Chief Rick McLean

Hicks notes the three nations are working well together, as they also did during a state of emergency activated by the 2018 wildfires that destroyed a large portion of the Tahltan’s territory.

McLean says he also recognizes the importance of having the proper mental health services and plans for Tahltan people as many are still dealing with trauma from 2018.

“Having some recent experience with a lot of this stuff has helped us be able to understand what steps to take on a daily basis,” McLean says.

“Our big concern is the long-term mental health effects of this and after coming through the fires, we’re still with a lot of mental illness from that … we have a very robust attitude towards making sure that we meet those needs.”

Working with the First Nations Health Council and Northern Health, McLean says they are making those resources readily available through alternative forums such as phone calls and FaceTime.

When it comes to facing a threat like COVID-19, McLean notes the Tahltan’s strength is working with community partners to get through the storm.

Natalia Balcerzak is a journalist in Northwest B.C., delving into the pressing issues of the region as it rapidly grows…

As the First Nation considers an egg incubator to increase the Klondike River's Chinook population,...

Kelly Andersen’s resignation from the Canadian Groundfish Research and Conservation Society follows an investigation by...