What BC Hydro is Hiding in its Misleading Site C Poll

In polling released by BC Hydro last week, the public power utility touts “broad” support for its controversial Site C dam — a mega hydro dam on the Peace River that would flood 107 kilometres of river valley, forcing farmers and First Nations off their land.

Hydro must have been counting on nobody taking a close look at the questions they asked respondents, because not only are they misleading, but they also tell another story entirely.

Let’s first address a glaring problem with the questions themselves: polling company Abacus Data began by asking British Columbians a multiple choice question about how to meet “increasing electricity demand.”

Then comes the key question: “Is the idea of building Site C, a new hydroelectric dam, to help meet the rising demand for electricity in B.C., an idea you strongly support, support, can accept under certain circumstances, oppose, or strongly oppose?”

Well whaddya know, that old porky about “rising demand for electricity” has appeared right in the benchmark polling question, presented plainly as fact.

(Anyone with any experience with polling knows the demand language is so prominent because BC Hydro has likely message tested the bejeebus out of it and knows exactly how to prime the pump to elicit the answer it wants.) 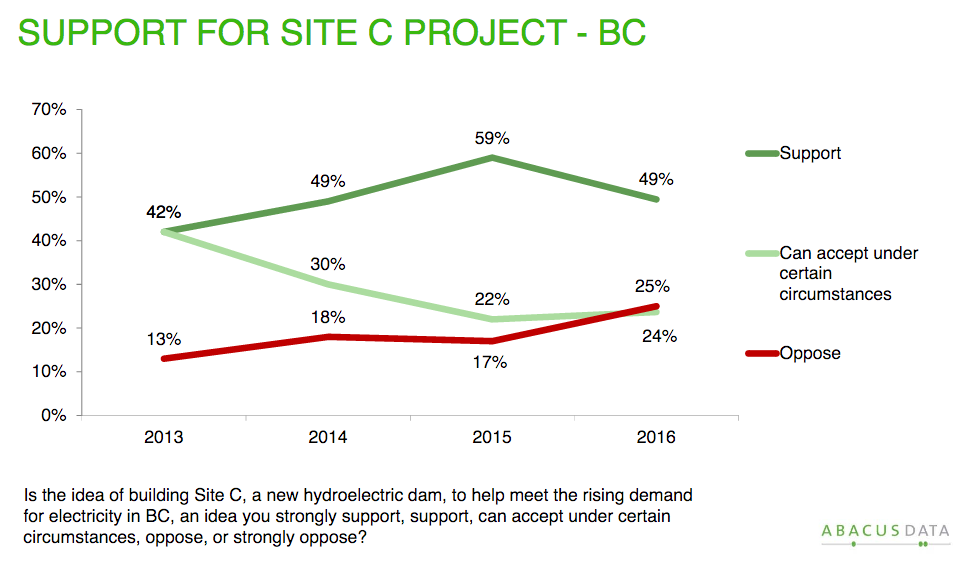 Continuing the obsession with power demand, later on in the poll, respondents are asked to gauge their agreement with the statement: “I have no doubt that the demand for electricity in B.C. will continue to grow significantly in the years ahead.”

Enter this quote from Bruce Anderson, chairman of Abacus Data, who designed and analyzed the poll: “What stands out for me is the fact that people broadly believe that more power will be needed and that a new dam is probably one of the best ways to meet growing demand.”

Well, doesn’t that just take the biscuit. Really, Mr. Anderson, were you surprised that after you told respondents multiple times that electricity demand is increasing that they then parroted your line back to you? Seems like a pretty simple case of cause and effect to me.

Opposition to Site C Dam Has Doubled Since 2013

Now, for the results themselves. While BC Hydro would like you to focus on awareness reaching a new high (77 per cent) and 73 per cent of British Columbians saying that they either support or can support Site C under certain circumstances, the trends tell a different story.

Between 2013 and 2016, awareness of the project grew from 41 per cent to 77 per cent. During that same period of time, opposition to the dam nearly doubled, growing from 13 per cent to 24 per cent. In other words, the more people who learn about the dam, the more opposition increases — that’s not a super positive trend-line for a project that is only six months into eight years of construction.

Support also grew from 42 per cent in 2013 to 49 per cent in 2016, during which time the B.C. government churned out relentless spin about the so-called “need” for the project. Despite the spin, growth in opposition significantly outpaced support.

“It's not that people don't have any anxieties about the impacts of this project, but that a better alternative is not obvious, and a certain degree of comfort has developed that this project is being handled with appropriate diligence,” Anderson said in BC Hydro’s release.

Actually, a better alternative is obvious — but BC Hydro never chose to poll about that. First and foremost, demand for power has been flat in B.C. for the past 10 years. Were it to begin to increase, we could easily meet our needs with the Columbia River entitlement or various smaller scale renewable options — chiefly geothermal.

Both of those options would be far cheaper than the Site C dam.

And when it comes to the project being handled with “appropriate diligence,” there are numerous high-profile individuals and groups who have come forward to argue the contrary. Perhaps most surprising is Harry Swain, chair of the provincial-federal panel tasked with reviewing Site C, who said BC Hydro’s failure to adequately investigate alternatives to the dam represents a “dereliction of duty" and that the province shouldn't be moving ahead while the demand case remains unclear.

The joint review panel’s report on Site C predicted the dam would lose at least $800 million in the first four years of production because there’s no need for the power in B.C. and exports would lose money.

That’s why B.C. Premier Christy Clark is now flapping her gums about selling the power to Alberta to power the oilsands  — an entirely new (and totally unrealistic) justification for the project that confirms there’s no need for the power in B.C.

Clark knows there’s no demand for new power in B.C.  No doubt BC Hydro knows it, too. Now if only British Columbians knew it — then how would they answer a polling question about spending nearly $9 billion to build a new dam?