October 5 came and went, and Canada’s boreal woodland caribou are still in trouble. That was the deadline the federal government gave provinces and territories five years ago to come up with caribou range plans for the iconic animals. Not one met the deadline.

Why should we care about caribou? Beyond the fact that we should care about all animals that play important roles in the ecological makeup of this “super natural” country, caribou are indicators of forest health. When caribou are healthy, it’s a sign the forests they live in are healthy. Forests provide numerous ecological services, such as preventing floods, storing carbon and regulating climate, as well as habitat for animals and plants and livelihoods and resources for people.

Failing to protect caribou habitat affects many Indigenous Peoples' rights, cultures and traditional livelihoods, and risks tarnishing Canada's reputation in the global marketplace. U.S. and international customers buy our products on the understanding that we’ll protect wildlife and honour commitments to Indigenous peoples.

In 2012, the federal government’s recovery strategy for boreal caribou concluded that only 14 of 51 herds were healthy enough to sustain themselves. The strategy, developed by 18 top caribou scientists, established a strong relationship between the extent of habitat disturbance and whether a local population increases, declines or remains stable.

The recovery strategy identifies a minimum of 65 per cent undisturbed habitat in a range as the “disturbance management threshold.” Based on this, the government gave provinces and territories five years to develop plans to protect or restore critical habitat.

In the face of ineffective stopgap measures — like killing predators such as wolves and bears, and penning female caribou to keep predators away — many scientists, environmentalists and First Nations have been calling on governments to address the real problem: cumulative disturbance.

Roads and seismic lines for forestry, mining and oil and gas operations, along with industrial activity, have fragmented and degraded caribou habitat, altering predator-prey dynamics.

In response to the obvious need for immediate action to protect and restore caribou habitat to reverse the creatures’ decline across the country, the Forest Products Association of Canada has done its part to stall the necessary changes. It claims, among other arguments, that the recovery strategy is being rushed; the science is uncertain, incomplete and out of date; the 65/35 disturbance threshold is too rigid; boreal caribou are recovering with good management plans across the country; and climate change isn’t being considered as a major cause of decline. 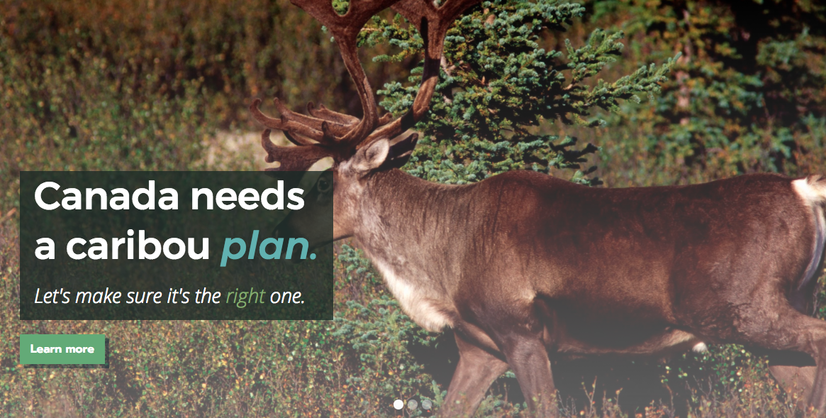 Screencap from the Forest Products Association of Canada's Caribou Facts website that has been criticized by scientists and conservationists.

Caribou don’t have time to wait, and the science is clear.

Many herds were identified as threatened more than 17 years ago, and provinces and territories have had five years to come up with plans. Although the causes of caribou decline are varied and complex, decades of research have shown habitat degradation is a major factor and habitat protection and restoration must be the foundation for recovery plans.

As for rigidity, provinces and territories have been given space to vary their plans based on science, but even protecting or restoring 65 per cent intact habitat only gives caribou a 60 per cent chance of survival.

Climate change is, of course, a factor in the decline of many plants and animals, but that doesn’t explain the rapid decline of caribou, nor should it be used as an excuse to ignore habitat destruction.

Yet these practices have contributed to caribou decline and, under the current management regime, there is no evidence herds are recovering.

Either the research shows continued declines or, in some cases such as Ontario, populations haven’t been monitored for four to six years.

It’s time for governments and industry to stop dragging their heels. Habitat maintenance and restoration should be recognized as a cost of doing business in the boreal.

Yes, we need to continue studying caribou and ways to keep their populations stable, and industry has an important role to play. Stalling, raising doubt about the research and exempting industry from regulations, as Ontario has done, will increase risks for boreal caribou.

Governments and industry must work with Indigenous Peoples to stop industrial expansion in boreal caribou ranges that have exceeded 35 per cent disturbance and take immediate steps to restore and protect critical habitat. Time is running out.

David Suzuki, Co-Founder of the David Suzuki Foundation, is an award-winning scientist, environmentalist and broadcaster.

Coastal ecosystems like salt marshes sequester millions of tonnes of carbon, but have been whittled...

The Kaska Dena have a plan to protect caribou and other endangered species while preserving...

B.C. carbon tax helps pay for remote mine to switch from diesel to hydro

Centerra Gold’s Mount Milligan Mine is one of 13 projects to receive a slice of...